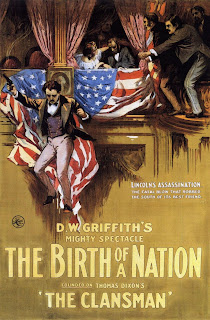 New Hampshire was the last state in the union to make MLK day an official holiday, so perhaps it's fitting that we'll be screening 'Birth of a Nation' at the Palace Theatre in Manchester, N.H. to mark this year's observance.

Seen today, nearly 100 years after its release, the picture seems to be from another planet. What else can you say about a film in which black characters are portrayed by white actors in blackface, and which climaxes with hooded members of the Ku Klux Klan riding to the rescue?

All this, however, is contained in the framework of cinematic story-telling that, however primitive, remains effective and compelling. The technique is impressive, although the content is at times bizarre.

But it's a film worth seeing, and with live music and on the big screen, especially, and with a little context, too. I've been looking at it recently to prepare music, and in doing so I've noticed many instances where director Griffith managed to get his cast to put in a lot of detail that music can actually help bring out.

There's a scene in a hospital where a security guard and Lillian Gish exchange glances, and I didn't notice it at first, but it's quite special, and I hope the music can help clarify and draw attention to some of those moments.

As for context, I think it's important for a modern audience to try to appreciate the impact this film had when it was first released. Imagine being able to be present in Ford's theater and witness Lincoln's assassination! Imagine being in the room at Lee's surrender to General Grant. Imagine standing on the battlefields with cannons and gunfire and death all around! And the fact that the Civil War was within living memory for many at the time would only heighten the impact.

And then there's the matter of Griffith's canvas. For a half-dozen years, he'd experimented with how to tell a dramatic story with a movie camera, gradually trying out ideas such as close-ups, long shots, irises, cutting back and forth, camera placement, bringing the action outdoors (instead of on a stage or in a studio), and so on. 'Birth of a Nation' is the film in which he put it all together and attempted to use all the things he'd learned to tell a story on a massive scale, both in terms of the narrative and the scenery. It was an amazing "all or nothing" gamble, and knowledge of this helps recapture some of the excitement that the film must have generated when it was first screened.

It's still there, if you look for it and are open to receiving it.

We've gotten above-average press for this one, so let's hope there might be a good house. We were planning to do a panel discussion but with the film itself running close to three hours with no intermission, that didn't seem really wise.

So here's the press release. Hope to see you there! 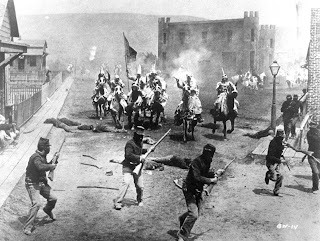 ‘Birth of a Nation’: Silent film masterpiece or racist artifact?

Landmark movie to be screened with live music on MLK Day, Jan. 17, in Manchester, N.H.

MANCHESTER, N.H.—What if a movie was acclaimed as a masterpiece, but portrayed the Ku Klux Klan as heroes? What if a movie aimed to show the realities of life during the Civil War, and yet used white actors playing roles in blackface? What does it say if a movie was clearly racist, depicting blacks as an inferior sub-species to whites, but was still a box office smash?

Those are among the questions posed by ‘The Birth of a Nation’ (1915), the ground-breaking epic film from director D.W. Griffith, which continues to inspire controversy nearly 100 years after its initial release.

In honor of Martin Luther King Day this year, a restored print of the film will be screened with live music at the Palace Theatre in Manchester, N.H. The screening, part of the Palace Theatre’s silent film series, will take place on Monday, Jan. 17 at 7 p.m. General admission tickets are $8 per person.

Organizers of the Palace Theatre’s film series specifically chose Martin Luther King Day to screen ‘The Birth of a Nation,’ long regarded as a masterpiece of early cinema but tarnished by racism and prejudice.

“Although ‘The Birth of a Nation’ has been reviled for its blatant and pervasive racism, it was a huge hit in its day and was accepted as one of the landmarks of early cinema,” said New Hampshire silent film musician Jeff Rapsis, who will perform a live score for the film.

“Screening this compromised classic on Martin Luther King Day is a chance for today’s audiences to appreciate how far we’ve come, and to also ponder how many of the prejudices on display in this film that we may still harbor, even unconsciously,” Rapsis said.

As the first-ever Hollywood “blockbuster,” ‘The Birth of a Nation’ thrilled audiences with its large-scale wartime action sequences, its recreation of the assassination of Abraham Lincoln, and spectacular photography by cameraman G.W. Bitzer.

At the same time, the movie was regarded as monumentally insensitive to issues of race, depicting blacks as a sub-race inferior to whites and portraying Ku Klux Klan members as heroes. Conceived by Griffith, a native Southerner, as a saga of two families caught up in the Civil War and its aftermath, many regarded the film as a prolonged statement of cinematic bigotry.

Seen today, the film abounds with offensive racial comments and imagery both overt and implied. To complicate matters for contemporary audiences, Griffith had all leading roles of black characters played by white actors in blackface; black actors were kept in the background or used only for crowd scenes, which lends the film a surreal quality to modern viewers.

Despite the racism, the film’s innovative and powerful story-telling techniques, as well as its massive scale, opened Hollywood’s eyes to cinema’s full potential, exerting a powerful influence on generations of filmmakers to come.

The controversy continues today, with ‘Birth of a Nation’ inspiring passions nearly a century after its release. Has enough time passed for today’s audiences to regard this landmark film as an artifact of its time, or an indication of enduring prejudice? This Martin Luther King’s Day, decide for yourself how far we’ve come with a screening of a restored print of this tarnished American classic the way it was intended to be seen: on the big screen, with live music, and with an audience.

The film stars Lillian Gish, Mae Marsh, Henry Walthall, and dozens of other silent-era performers. Gish, who died in 1993 at age 99, continued to act in films as late as 1987, when she appeared in ‘The Whales of August.’ Her later work includes an appearance on the TV series ‘The Love Boat’ in 1981.

All movies in the Palace Theatre’s silent film series were popular when first released, but are rarely screened today in a way that allows them to be seen at their best. They were not made to be shown on television; to revive them, organizers aim to show the films at the Palace as they were intended—in top quality restored prints, on a large screen, with live music, and with a live audience.

Screenings in the Palace Theatre’s silent series take place on Mondays at 7 p.m. ‘The Birth of a Nation’ will be shown on Martin Luther King Day, Monday, Jan. 17, at 7 p.m. the Palace Theatre, 80 Hanover St., Manchester, N.H. Admission is $8 per person, general admission seating. Tickets available at the door or in advance by calling the Palace Theatre box office, (603) 668-5588 or online at www.palacetheatre.org.

“...the film represents how racist a white American could be in 1915 without realizing he was racist at all. That is worth knowing. Blacks already knew that, had known it for a long time, witnessed it painfully again every day, but "The Birth of a Nation" demonstrated it in clear view, and the importance of the film includes the clarity of its demonstration. That it is a mirror of its time is, sadly, one of its values.”
—Roger Ebert, 2003, The Chicago Sun-Times

“If one can put the racial overtones aside, this is quite probably the most accurate celluloid representation of Civil War times to exist. It was made only 50 years after the Civil War ended, when many people who had actually been through the war were still alive to give first hand accounts.”
—Robert K. Klepper, ‘Silent Films,’ (1999)

“More than a hugely successful spectacle, it was a masterpiece—using Griffith’s trademark cinematic techniques and combining emotional intensity and epic sweep—but it was a deeply tainted one. Its racism—consciously intended by the filmmaker or not—makes parts of ‘Birth’ extremely difficult to watch today.”
—Peter Kobel, ‘Silent Movies,’ (2007)
Posted by Jeff Rapsis at 6:37 AM