Big reaction to 'Orphans of the Storm' 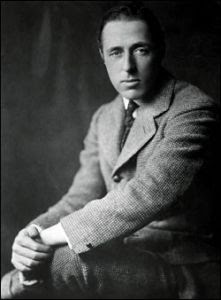 As old and creaky as they can seem when watching them on your own, there's something about D.W. Griffith's best films that can still rouse an audience, even now, almost a century after they were first released.

I saw this earlier this month, when we screened 'Birth of a Nation' (1915) at the Palace Theatre in Manchester, N.H. in honor of Martin Luther King Day. Even with all the blatant racism, people afterwards said the film really held them, especially in the amazing climax of Part 2.

"I was so conflicted," said one audience member, "because of the way the film was structured, my instinct was to root for the klan when they were riding to the rescue, but then I said, 'Wait a minute, no, no! It's the Ku Klux Klan. I can't root for them!" Incredible that Griffith's suspense-building and intercutting still works underneath a miasma of racism. That's some solid technique.

I saw the same thing two years ago, when we screened Griffith's 'Way Down East' (1920) in Wilton, N.H. in January, 2009. I thought a modern audience would find most of the picture quite blah, with only the climactic "rescue at the edge of the waterfall" sequence making it worth it.

To my surprise, the screening drew a large mid-winter audience, and they stayed with it from start to finish, actually hissing the bad characters and really, REALLY cheering Richard Barthelmess when he rescued Lillian in the nick of time. I still rate it as one of the all-time best screenings we've done, in terms of how a film connected with an audience, and how the music came together as well. (Sometimes that happens.) 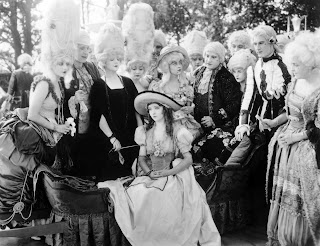 And so it went with 'Orphans of the Storm' (1921), another sprawling melodrama by Griffith, which we screened yesterday (Sunday, Jan. 30) at the Wilton, N.H. Town Hall Theatre. A pretty full house was on hand, and the picture held them from start to finish. We got the same reaction throughout as in 'Way Down East,' including some hisses when Mother Frochard lies to Louise about how her eyesight can be cured, and people actually laughed quite heartily at some of the light stuff Griffith included throughout, such as the wine spilling into a sleeping spectator's mouth.

The music came together pretty nicely, too, I thought: I used a minuet for the two sisters, which was transformable into many shapes and forms, as well as a dark melody for Mother Frochard and her brood and an "love theme" for some of the tender moments with the Lillian Gish character, and elsewhere as well. Throw in other motifs for tension and suspense, and an occasional blast of "La Marseillaise" (but not too much) in the chaos of the revolution scenes, and you've got a movie score.

My one piece of cleverness, I thought, was to use the descending triad in the first phrase of "La Marseillaise" as the motif for the guillotine, played very staccato and fast, and in a minor key. And as big as the film was, it seemed very effective to play the first two-thirds of it entirely on a harpsichord setting, only switching to a full orchestral texture when the scenes of revolution start.

Afterwards, people said they were astonished at the size and scope of the film. Imagine that! Nearly 90 years after its release, people can still be impressed at what Griffith and other silent filmmakers were able to accomplish.

I did what I could to set expectations. Prior to the film, I asked the audience to travel back in time with me, not to the 1780s, when the film takes place (D.W. Griffith would take care of that) but to the 1920s, before 'Gone With the Wind' or 'The Ten Commandments' or 'Gandhi,' when this kind of epic drama was something entirely new.

Imagine having read about the French Revolution in books (if you got that far in school) and maybe seeing pictures and hearing tales of it, but that was all you knew and all you expected to know. Maybe if you were really ambitious, you might try reading 'A Tale of Two Cities' by Charles Dickens, but that would be it.

And then, imagine going to go to a motion picture that actually showed you all if it happening right before your eyes, with dazzling sets and incredible costumes (the hair of the aristocratic women alone is worth the price of admission) and a real guillotine ready to be used: the French Revolution not only brought to life, but a crucial player in a drama that pulled you in and held you fast!

I think that kind of context helps to get things started, but once a film like 'Orphans of the Storm' starts running, it works its magic all on its own. And one of the reasons it gives people a different kind of satisfaction than a lot of contemporary cinema is because in many cases, the characters (and the stories themselves) are rooted in a kind of simplicity that we find refreshing in a motion picture theater.

Not for D.W. Griffith were complex heros with shades of good and bad in them and internal structures. I think one of the potent strengths of his films, and why they continue to generate emotional responses today, is that many of the main characters truly are thoroughly good or thoroughly bad. They may not wear white or black hats, but you know who to root for.

Of course life isn't like that, but then isn't that what the movies were all about right from the beginning? Escape, and reinventing life as we'd like to imagine it, sometimes, was all part of the magic of the movies.

And it's interesting how a director such as D.W. Griffith understood that right from the start, and not just because he was limited to telling a story in visual terms. Whether or not a film has a soundtrack, the rearrangement of reality is one of the things that keep us coming back to the movies, and to other forms of art as well. Reality reimagined in a way to beguile us, to fulfill our wishes, to make our dreams come true, even if we're not aware that a movie is doing it at the time.

'You Can't Please Everyone' Department: Near the beginning of 'Orphans of the Storm,' there's a moment where none other than Thomas Jefferson makes a cameo appearance while the future revolutionaries discuss their options. Since the topic is revolution, it was the first time I used the melody of "La Marseillaise," although only at a very slow tempo, as if it was only beginning to gather steam.

And then, when I came to the descending triad at the end of the tune's first phrase, it occurred to me that it was the same as the opening notes of the "Star Spangled Banner"—even the rhythm is about the same. So I finished the phrase by morphing it into the first line of the U.S. national anthem, just as Thomas Jefferson was on screen for his small part.

You can probably guess what happened. After the screening, a woman came up and had nice things to say in general, except for the music when Thomas Jefferson appeared.

"That was NOT our national anthem at the time," she lectured, going on about how THAT tune was actually a British drinking song at the time.

Well, what can I say? I appreciate her perspicacity and I was thrilled to speak with an attentive listener who caught the reference. And it's a problem to me when a score calls attention to itself, so I had to wonder. But I also felt the tiny fragment helped establish Jefferson's credentials, especially when balanced off with the Marseillaise.

Having never taken part in a revolution, I'm not sure how common that state of mind is, but as it describes a fair amount of the human condition under any circumstances, I rest my case.
Posted by Jeff Rapsis at 9:50 AM