Happy New Year! It's now 2011, and we grow ever more distant from that very short time when movies, as a rule, were shown publicly without a fixed soundtrack. Increasingly, I look at this as one of those flukes that sometimes happens, with the result being the very brief existence of a unique art form that was actually quite different from what we know as movies today. Not more primitive or less sophisticated or more innocent or less accomplished—not "more" or "less" anything, because the two forms (silent pictures and those with a fixed soundtrack) are so different as to be two separate art forms, especially at this distance, and comparisons on superficial basis are pretty useless.

Which is better, a sculpture or a convenience store? It's the same thing.

More on that as the new year unfolds. For now, there are screenings to talk about and preview. So here's a brief update: 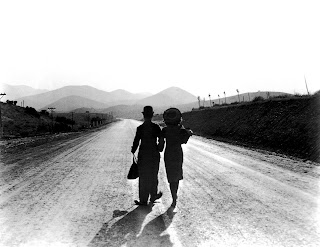 • An impending blizzard led to a smaller-than-expected turnout for Chaplin's 'Modern Times' (1936) at the Wilton (N.H.) Town Hall Theatre on Sunday, Dec. 26, but it was still enough of a turnout to create some excitement. Funny, though: 'Modern Times' didn't generate nearly the laughter that I recall at prior screenings. The one scene I can say for sure comes early on, when Chaplin picks up the fallen flag and behind him marches what looks like the case from "Les Miserables." (And for the first time, I noticed that one of the signs in the crowd reads simply "Svoboda," the Russian word for "Freedom.") In the past this scene has produced gasps of astonished laughter; this time it provoked barely a titter. Was in the snowy forecast? Was it everyone bloated from holiday overindulgence? Who knows? But it was interesting for me because thanks to Chaplin's soundtrack, for once I got to sit out in the audience and munch popcorn instead of flailing away over a hot keyboard. Weird, too: the one short I chose to include (weather-related short program) was 'Easy Street,' regarded as one of the best Chaplin Mutuals, but which I have never seen an audience really react strongly to, including this one. Something about this film keeps the belly laughs from really breaking forth. I saw it once years ago in Northhampton, Mass. with a score by the excellent Alloy Orchestra, and there wasn't much laughter then, something I attributed to the group's sound volume—when you can't hear others around you reacting, it's hard for the audience-wide laughter to build. I have tried to keep this in mind when accompanying comedies, but in this case, 'Easy Street' still seemed to fall relatively flat. Your comments, please. 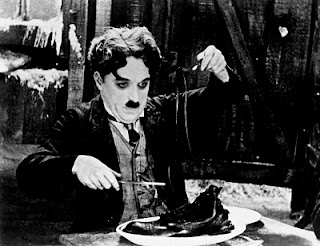 • Then we had a New Year's Eve screening of Chaplin's 'The Gold Rush' (1925) at the Red River Theatres in Concord, N.H. (Both of these Chaplin screenings were licensed through Janus Films in New York, by the way. Thanks, guys!) I paired this one with Chaplin's 'The Adventurer' (1917), another highly rated Mutual that really does produce laughs every time it's shown, and Keaton's 'The Frozen North' (1922), a film that doesn't get shown much but I thought would help set the stage for the Gold Rush's Arctic environment. Nice reaction to everything, though for some reason I felt my playing was off the mark. Gold Rush is a great New Year's Eve film, though, with its big scene in the saloon (two men dancing!) intercut with Chaplin in his cabin, which is a very hard sequence to bring off musically, by the way, and not diminish the contrast of emotions on screen. One observation: the scenes that everyone regards as classics (the eating of the shoe, the dance of the rolls) are SO well-known that they seem to produce less-than-expected laughter. But some of the lesser moments (such as Chaplin opening a mind-bogglingly useless map) induce big laughs, leading me to believe that yes, there is a strong connection between comedy and surprise, or at least that familiarity can sometimes dilute comedic impact.

• But enough of that! Next up is 'Three Ages' in at the Plymouth (N.H.) Flying Monkey Moviehouse and Performance Center on Thursday, Jan. 13 at 7 p.m. Here's the press release for more info... 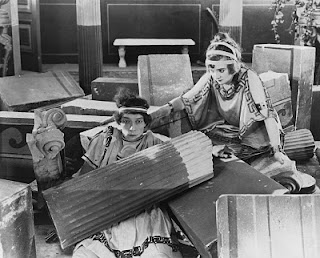 PLYMOUTH, N.H.—Stone-faced silent clown Buster Keaton takes to the big screen again with a showing of his feature film 'Three Ages' (1923) on Thursday, Jan. 13 at the Flying Monkey Moviehouse and Performing Arts Center in Plymouth, N.H. The program, accompanied by live music, will also include several Keaton comedy short films released before he made the jump into full-length feature films.

The program starts at 7 p.m. Admission is $5 per person. The films will be accompanied by live music by local composer Jeff Rapsis. Dinner is also available for patrons who arrive early at the Flying Monkey, 39 South Main St., Plymouth, N.H. For more information, call (603) 536-2551 or visit www.flyingmonkeynh.com.

Keaton, one of the silent film era's great comics, was known for his ingenuity with gags, acrobatic stunts, and his trademark dead-pan manner. In dozens of films made throughout the 1920s, Keaton made audiences around the world laugh while never cracking a smile himself. He was among the first actors and directors to move comedy out of the confines of the stage and use cinema to expand it to a massive scale, using film to do battle with ocean liners, railroad locomotives, cyclones, and hordes of policemen ready to give chase to his hapless everyman character.

Keaton was raised as part of his parents' knockabout vaudeville act, in which he was included shortly after being born in 1895. His birth name was "Joseph," like his father, but Buster earned his nickname at an early age from magician Harry Houdini after the young Keaton fell down a flight of stairs unharmed.

Buster joined the film industry in 1917, when a friend introduced him to Fatty Arbuckle, then one of the nation's top movie comics. Keaton signed on with the Arbuckle troupe, putting his comic and acrobatic skills to use as he learned the then-new art of making motion pictures.

Keaton branched out on his own in 1920, producing a series of popular short comedies that were recognized for their brilliance, originality, and physicality. By 1923, he was ready to take the leap into much riskier feature film production, but hedged his bets by making 'Three Ages' as a kind of test.

'Three Ages,' a loose parody of the then-famous D.W. Griffith drama 'Intolerance' (1916), weaves together similar love stories told in three different epochs: the Stone Age, the Roman Age, and "Modern" (1920s) times. If the feature showed signs of failing at the box office, Keaton could always split it up into three shorter films to be released separately.

But the picture was a success, due primarily to inspired comic touches in all sequences that still shine through to audiences today. 'Three Ages' thus launched Keaton's spectacular run of classic comic features that lasted until the industry's transition to sound pictures in 1929.

After his starring career ended, Keaton continued to work as a sought-after gag man and cameo performer. After successfully battling alcoholism, he emerged in later life as an elder statesman of comedy, performing widely on early television shows and on European and American stage tours. He died in 1966.

'Three Ages' is the latest in a series of monthly silent film screenings at the newly renovated Flying Monkey Moviehouse and Performing Arts Center. The series aims to recreate the lost magic of early cinema by assembling the elements needed for silent film to be seen at its best: superior films in best available prints; projection on the big screen; live musical accompaniment; and a live audience.

‘Three Ages’ will be shown on Thursday, Jan. 13 at 7 p.m. at the Flying Monkey Moviehouse and Performing Arts Center, 39 Main St., Plymouth, N.H. Free admission; contributions encouraged. For more info, call (603) 536-2551 or visit www.flyingmonkeynh.com.
Posted by Jeff Rapsis at 11:21 AM