Constance Talmadge: Va va va voom and all that 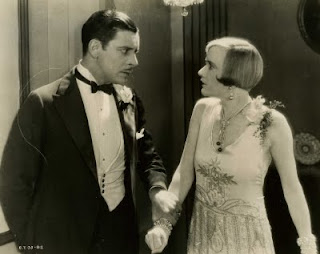 Two shockers from yesterday's screening of 'Her Sister From Paris' (1925) at the Wilton (N.H.) Town Hall Theatre. 1: We had a sizable audience! (Attendance tends to atrophy on summer weekends.) And 2: They really reacted!

Not that they shouldn't react, but I'm always tickled when a silent film with a totally forgotten performer can connect with an audience, as happened yesterday. In this case, it was Constance Talmadge, a popular star of light comedies in the 1920s, but an all-but-unknown today.

Connie, in a dual performance as an insecure wife and her worldly twin sister (yes, from Paris), had our audience in the palm of her hand right from the start. Good reaction all the way through, especially in scenes where Connie played both sisters at the same time. (Just roll with it, folks.) Incredible acting chops on display, and wonderful interplay with co-star Ronald Colman, who's one that folks do still remember.

Was Connie's celebrity merely a '20s fad? Well, any star's popularity is based somewhat on familiarity at the time, I think -- people enjoy her, recognize her, and keep going to her films to see her next adventure. So a particular film, taken out of this context, can often seem utterly baffling to a modern audience. This is the case with Harry Langdon, I think, whose comic style was in part a reaction to other comedies at the time, and so depends on a familiarity that today's audiences don't have.

But not so with Connie. 'Her Sister From Paris' shows a performer with a remarkable acting range, a lively sense of humor, and an ability to win an audience over all in one shot, which is what she did. The film produced gales of laughter at all the right moments, and was a pleasure to score.

On that, I must say the film's Vienna local creates a great milieu for music. The temptation is to go heavy on waltzes and 3/4 time, and indeed, the 'Blue Danube' specifically plays a key part, to the point of the sheet music being shown on screen.

But given the now 'old world' feel of the film (1920s Vienna), I went with a harpsichord setting and maintained it throughout the film. Though not historically accurate, I think it created the right mood overall for our audience. And for waltzes, yes, I worked in 'Blue Danube' and other tunes in 3/4, but put them in a blender depending on the flow of the scene. In some cases, it wound up sounding more like Ravel's 'La Valse' than anything else.

But a key to helping this film come to life, at least in terms of music, was to use a steady 4/4 rhythm and a minor 6th chord whenever the influence of the 'worldly' sister from Paris was in evidence. Not just when she was on the screen, but when her other sister was pretending to be her during the many plot convolutions. We got laughs just from that music showing up when you knew it was what the characters were thinking on the screen. Still, this was definitely a film where less was more -- once the action starts, it needs very little music to get across, and I tried to stay out of the way so audience reaction could flow unimpeded.

Back to Connie: Her performance of two siblings with different personalities reminded me, of all things, of the way Nicholas Cage played the dual roles of Charlie and Donald Kaufmann in the much-later film 'Adaptation.' In the later film, I remember being impressed at how Cage could play both roles, but always make it clear which brother was which.

Likewise in 'Her Sister From Paris' -- although Connie doesn't share nearly as much onscreen time with herself as Cage did in 'Adaptation,' it's never less than completely, instantly clear which sibling we're looking at on screen, just by the way she carries herself and, I'm sure, other details way too subtle for me to notice.

And kudos to the filmmakers for doing the split screen scenes (with two Connies) so seamlessly in 1925. It was pretty much flawless. There were a few moments where both characters are onscreen, but one is sobbing with her head away from the camera, and you think it's gotta be a double, but then she raises her head, and it's also Connie! 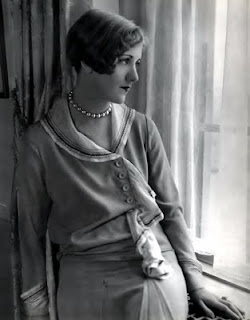 And I have to say, though what's considered attractive in women (and clothes and hairstyles and all that) can go in and out of style, Connie had a timeless, lively beauty that still comes through loud and clear, nearly nine decades later. In stills (such as this one), she often looks a little dowdy, I think. But in her films, at least in 'Her Sister from Paris,' she really comes to life in a way that photos don't seem to capture. Those eyes, that face. As they used to say on the machine shop floor, va va va voom!

As evidence at how beguiling 'Her Sister from Paris' is, after the screening I was talking to a newspaper colleague of mine who pointed out an inanity that I was totally oblivious to: that a single mole on the cheek could utterly confuse everyone about a person's identity, including a woman's husband and her trusted maid. Right! But my critical faculties were do disarmed by it all, I didn't even think of it.

He also pointed out that if the stage show that Connie stars in is any indication, the people of Vienna were producing entertainment that pre-dated Bollywood extravaganzas by at least half a century.
Posted by Jeff Rapsis at 8:51 AM