Our three-show "summer romance" silent film series at the Wilton (N.H.) Town Hall Theatre is pretty neat, I think. First, we're showing rarely seen features starring the Talmadge sisters, Constance and Norma, two of the biggest stars of the 1920s, but who are all but forgotten today. Also, we're showing their sister Natalie's one big role, as the female lead in her husband Buster Keaton's family feud film, 'Our Hospitality' (1923). And finally, the series gives today's audiences a chance to see how diverse silent film was: not just slapstick, but all flavors of comedy. 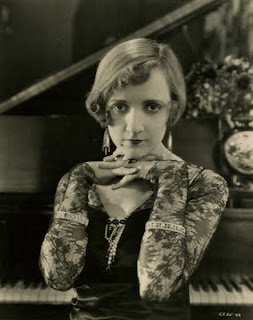 I've been curious about Constance and Norma for years, and especially since encountering Joe Yranski of New York City, who invited me to the Donnell Library in 2008 to accompany 'Lessons in Love' (1921), one of Connie's features that had then just been restored. Joe is an ardent admirer of the Talmadge sisters, and his enthusiasm (as well as the surprisingly light touch of 'Lessons') whetted my appetite for more.

I got another dose of Connie in 2009 at the Kansas Silent Film Festival, where I saw 'Her Sister From Paris' (1925), a surprisingly sophisticated comedy that holds up wonderfully, and also met Melissa Talmadge Cox, Buster Keaton's granddaughter and grand-niece of Connie (whom she remembered as "Aunt Dutch") and Norma.

So in looking for something special for this summer in Wilton, I decided to take the plunge myself and do music for films starring all three Talmadge sisters, all under the heading 'Summer Romance.' It's been fun putting the music together for these and I hope you'll attend all three. First up, on Sunday, June 26 at 4:30 p.m., is 'Her Sister From Paris' (1925), with Connie playing against Ronald Coleman; it's paired with 'The Matrimaniac' (1916), costarring Constance and Douglas Fairbanks Sr. at the very start of his film career. Both nice pictures with new music by me.

Later: On Sunday, July 31 at 4:30 p.m., it's Keaton's 'Out Hospitality' (1923), co-starring Natalie Talmadge, and a couple of Keaton shorts just for laughs. I've recently rediscovered 'The Playhouse' (1921) so we'll probably show that. And then, on Sunday, Aug. 28, it's Norma Talmadge in 'Kiki' (1926), paired with another early Douglas Fairbanks, 'Flirting with Fate' (1916). Admission is free to all these screenings, though donations are encouraged to defray costs. Pray for rain on those weekends so attendance gets a bad weather boost. :) 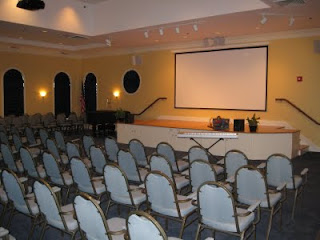 Wednesday, June 15: Screened a program for the residents of RiverMead, an upscale retirement community in Peterborough, N.H. with screening facilities to die for. A very appreciative audience of about 35 people enjoyed Buster Keaton's 'One Week' and other silent comedies, and a few residents recalled seeing silent films as children.

Thursday, June 16: Trekked up to the Flying Monkey Moviehouse and Performance Center in Plymouth, N.H. to play for a screening of this month's roadshow picture, Keaton's 'The General' (1926). Nice spring weather = disappointingly low turnout, about 25 people, but I was happy with how the score came out. Lots of good questions afterwards. 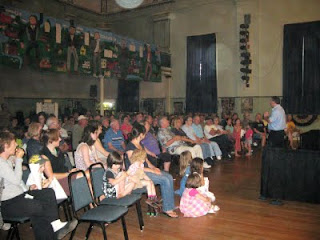 Saturday, June 18: Brandon. Vt. (about 150 miles away!) for 'The General' (1926), this time as part of the town's annual 'Civil War Days' celebration. Word is getting around in Brandon, where I'm doing a second season of silents with live music, as we had 115 people turn up for this, filling the Brandon Town Hall, where we stage the screenings. Extremely enthusiastic response from start to finish; 'The Playhouse' (1921) and 'The General' were met with gales of laughter as well as cheering and other strong reactions. Audience ranged from tiny tots to octogenarians. What a pleasure to do music for a film under these conditions; the score fell together effortlessly, it seemed. Nice ovation at the end, all owed to Buster's brave filmmaking from nearly a century ago now.

Sunday, June 19: Ogunquit, Maine (about 70 miles away) for another 'General,' this time in the Leavitt Theatre, a vintage 1920s summer-only seaside moviehouse that still operates today. Owner Peter Clayton and his family have embraced silent film screenings during tourist season; unfortunately, a lovely Sunday afternoon cut attendance down to about a dozen paid admissions. Still, a nice screening and again I hope for some luck (bad) with the weather.

P.S.: Prior to this spate of screenings, Vermont Public Radio's Nina Keck was nice enough to put together a piece on silent film music featuring comments and illustrations by me. It must have taken a herculean effort to edit me into intelligence, but it came out very nice, and I'm sure it helped contribute to the large turnout on Saturday night in Brandon, Vt. Thanks, Nina! To listen to it (or to read a transcript), go to the VPR Web site.
Posted by Jeff Rapsis at 3:37 PM