In terms of silent film accompaniment, I'm living the dream.

Yesterday (Sunday, June 5) I played a Rin Tin Tin double feature matinee at the Leavitt Theatre in Ogunquit, Maine, a moviehouse that opened in 1923 and remains virtually unchanged. And then I rushed down to Boston for an all-Buster Keaton program presented in 35mm at the Somerville Theatre, a wonderful century-old showplace in Davis Square.

Both screenings went well, as did the frantic ride between them, which was a serious concern. Ogunquit and Boston are separated by about 75 miles, but on a Sunday afternoon in tourist season (which started last week), southbound highway traffic can slow to a crawl. Thankfully, no big delays at all until the I-93 weekend bridge replacement project that greeted me within sight of the Beantown skyline.

About the films: In Ogunquit, showed 'Clash of the Wolves' (1925) and 'Lighthouse by the Sea' (1924), two Rinty adventure flicks that went over well with the audience of about 40 people, all of whom sat way in the back of the 600-seat theater. (What is this, church?) Amused at one woman who asked for the air conditioning to be turned down; got to explain how the Leavitt's well-preserved state extended to the complete lack of any kind of heating or cooling system. With the weather, in 1923 you took what you got.

The Rin Tin Tin scores came together nicely, despite a relative paucity of material to work with these two, even after multiple screenings. I have a trusty old fanfare for 'Clash' that I used a lot, and for the bad guy did a lot of "minor chord, then down four steps" moves. 'Lighthouse,' which is set on the Maine coast, used a lot of 'Over the Ocean Waves' to lend things a nautical feel, and a minor-chord syncopated thing for the bad guys in this one.

One thing I try to do, even for a double feature starring the same actor (person or dog), is to come up with completely new music for each film. I avoid carrying over anything, as I feel each film should stand as its own cinematic world, and the music can help establish that. (Or not.) On Sunday, a couple of times during 'Lighthouse,' I caught myself heading toward material from the earlier film. One of my major techniques is to recycle and reinvent and repeat material during each film, so for another film immediately following, it can take a real effort to avoid reverting back to similar moves. But I think it's important to come up with different stuff—in the Rin Tin Tin flicks, especially to acknowledge the completely separate settings, one out West and the other on the rockbound coast of Maine. 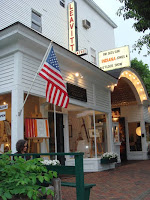 The Leavitt features a wooden floor (great acoustics!) with a fairly steep pitch right down to the base of the stage. I've played here before and never had any problem with what you might call "keyboard slippage." So, in the first big key-pounding chase sequence in 'Clash,' I wasn't expecting the whole unit (stand and keyboard) to begin sliding downhill right from under my fingers. I've done some interesting things accompanying films, but until now I had not had to deal with a moving keyboard. Thankfully, the thing stopped sliding when it hit a stud supporting the stage extension, but I was never quite sure it wouldn't totally tip over in mid-show. So things got a little sedate, I guess, though people afterwards said they didn't notice any difference.

I want to thank the Ogunquit police department for putting up with me. Not only did an acquaintance end up talking an officer out of giving me a ticket for leaving my Forester too long in a nearby lot (while I was busy playing), but another officer had to "guard" me from behind after I pulled up in front of the theater to load out, which is a no-no because it's apparently a travel lane on busy Route 1. Ah, the glamour of show biz! 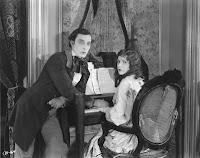 In Boston, it was a delight to return to the Somerville Theater, where they continue to fight the battle against an all-digital cinematic future. Manager Ian and Projectionist David were a pleasure to deal with, and the 35mm prints supplied by Tim Lanza of Douris Corp. were superb. Screened two shorts: 'One Week' and 'Scarecrow,' and then 'Our Hospitality' (1923). The 'Scarecrow' print in particular was a stunner: clear and sharp and great tonal range, and projected 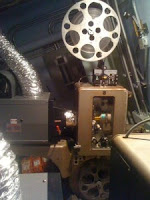 on a massive scale by the theater's Norelco machines, complete with amped-up bulb courtesy David. The immensely bright image that resulted was a revelation to me, and I've known these films for most of my life. Here's hoping the rest of the 35mm material will be equally good!

One unexpected hazard at the Somerville was...mosquitos! Or actually, one pesky little one who somehow found his way into the theater (with the weather so nice, the front doors were wide open) and then, once the show started, was drawn to my piano light. It took most of Buster's train ride to finally swat him away.

The score for 'Our Hospitality' came together very satisfyingly. As the house was new to me, I used mostly older material to stitch together a score that had music for Buster, the feud, Buster/Natalie, the train ride, and so on. It all flowed quite naturally. I even had a nice little signature for the kindly old parson. I think it was mostly a function of having played two films already that same day; this makes it easier to get "into the zone" where I'm just going with the film and lose track of my surroundings, though there's always a little part of me that listens for the audience and works with the reactions. It's an interesting state of mind and I'm sure it's not long before someone wants to hook up electrodes to me during a screening and collect some data. 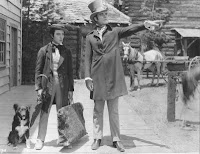 Back to 'Our Hospitality': One scene that music can really punch up is the walk through town that Buster takes when he arrives. Buster doesn't know that a polite man accompanying him would like to kill him, even as they stroll down the street together, chatting amiably. The man keeps dashing off to frantically (and unsuccessfully) borrow a pistol, then returning to resume the facade with Buster. Switching back and forth, from Buster's serene melody to the agitated feud music, with appropriately timed silences, produced surprisingly big laughs.

All films had their "the crowd goes wild" moments. The biggest reactions I heard was when Rin Tin Tin leaps a wide canyon in 'Clash of the Wolves,' and then when Buster performs his waterfall rescue in 'Our Hospitality.' Such times, with everyone hooting and hollering, make it all worthwhile.

I get the next weekend off (from film screenings, anyway) but then it's a busy summer. And the fall/winter is starting to shape up, too, with continuing series in Wilton and Plymouth, N.H., and a new monthly series in the Manchester (N.H.) Public Library. An updated schedule (with screenings out as far as May 2012, ouch!) is posted on the 'Upcoming Screenings' page on this blog.
Posted by Jeff Rapsis at 9:21 PM