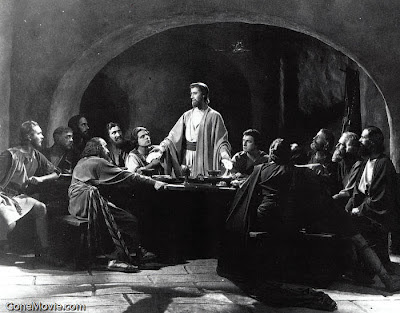 Okay, just getting a note online here that the 'King of Kings' (1927) screening scheduled for Tuesday, April 3 at the Manchester (N.H.) Public Library starts at 5:30 p.m.. That's a half-hour earlier than our usual starting time of 6 p.m. for these library screenings. We had to move it up because the library closes at 8:30 p.m. and we won't fit the film in if we don't start a bit early.

I'll be doing live music, and anything can happen. An added attraction tonight is that Ryan Liston, a student at the University of New Hampshire, will film the proceedings as part of a project he's doing. I'm not ready for my close-up, but I said it was fine with me.

Here's the press release that went out last month. Hope to see you there tonight as we mark the Easter season with one of the silent film era's big biblical blockbusters!

Blockbuster to be screened with live music on Tuesday, April 3 at 5:30 p.m. at Manchester (N.H.) Public Library

MANCHESTER, N.H.—With Easter coming on Sunday, April 8, it's a great time to take in an epic movie depicting the greatest story of all: the crucifixion and resurrection of Jesus Christ. Directed by Cecil B. DeMille and featuring a cast of thousands, ‘The King of Kings’ (1927) stands as one of the sensations of Hollywood’s silent film days. Starring H.B. Warner in the title role, the film broke box office records when first released.

In honor of this year’s Easter season, a restored print of ‘The King of Kings’ will be screened with live music on Tuesday, April 3 at 5:30 p.m. in the Carpenter Auditorium of the Manchester Public Library, 405 Pine St., Manchester, N.H. The screening is a chance to experience this landmark film as it was intended to be seen: in a high quality print on the big screen, with live music and with an audience.

Admission to the screening is free; donations are encouraged to defray expenses. Please note the film's starting time is 5:30 p.m., earlier than the usual starting times for the library's silent film screenings, to accommodate the film's 2½-hour length.

As a movie, ‘The King of Kings’ was designed to push the limits of Hollywood story-telling. Director DeMille, already famous for over-the-top historical epics such as the original ‘Ten Commandments’ (1923), demanded and got a then-astronomical budget of $2 million, which he used to construct massive sets, hire thousands of extras, and stage an enormous earthquake and howling hurricane at the film’s climax.

“The monumental devastation unleashed by Christ’s crucifixion dwarfs even the cataclysmic Holy Grail finale of ‘Indiana Jones and the Last Crusade,’ ” wrote film historian Charles Musser in 1992, observing that “raw material and non-union labor gave more bang for the buck in 1927.”

The cast included early Hollywood star H.B. Warner as Jesus Christ, winning plaudits for his portrayal of the lead role. (Warner’s later roles included that of druggist Mr. Gower in Frank Capra’s 1946 Christmas classic ‘It’s a Wonderful Life.’) Playing Peter is character actor Ernest Torrence, famous as Captain Hook in the original version of ‘Peter Pan’ (1924); the role of Judas is acted by Joseph Schildkraut, already a Hollywood veteran who later went on to play Nicodemus in ‘The Greatest Story Ever Told’ (1965), a much-later Hollywood epic on the same topic.

Critics remain impressed by the film’s epic sweep, although they often dismiss how DeMille pandered to a mass audience. “It’s a stupendous exhibition by any standard, though you can practically smell the sawdust and greasepaint,” wrote critic Peter Matthews in 2004. “Despite the baloney (or because of it), ‘The King of Kings’ captures the fervor of naïve devotion. On that level, the movie is a genuinely uplifting experience,” Matthews wrote.

The film will be accompanied by live music performed by local composer Jeff Rapsis, who specializes in improvising scores to silent films. Rapsis uses a digital synthesizer to recreate the texture of the full orchestra, complete with soaring brass and crashing percussion.

‘The King of Kings’ is the latest in a series of monthly silent film screenings at the Manchester Public Library. The series aims to recreate the lost magic of early cinema by bringing together the elements needed for silent film to be seen at its best.

‘The King of Kings’ will be shown one time only on Tuesday, April 3 at 5:30 p.m. in the Carpenter Auditorium of the Manchester Public Library, 405 Pine St., Manchester, N.H. Free admission; donations encouraged to help defray expenses. For more info, call (603) 624-6550. For more about the music, visit www.jeffrapsis.com.