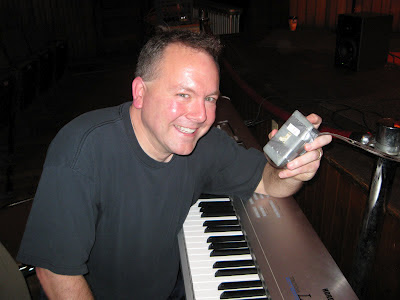 Me with the handy improvised on/off switch at the Wilton Town Hall Theatre.

The first cold and rainy day we've had in awhile was good weather for a screening of 'Noah's Ark' (1928), the part-talkie World War I/Biblical hybrid epic starring Dolores Costello, George O'Brien, and a cast of thousands, most of them washed away in the climax.

It's a whale of a film (I know, different Biblical tale), but presented an unusual challenge for our screening at the Wilton (N.H.) Town Hall Theatre. As a part-talkie with two sequences of synchronized dialogue, how could we rig it to hear the soundtrack but still do live music?

The answer came in the form of an improvised on/off switch hooked up by Dennis Markevarich, long-time owner/operator of the Wilton Town Hall Theatre. Dennis spliced the switch into the power feed for his on-screen sound system so that the film's soundtrack could be turned on or off at will.

The result was a household light switch held together with duct tape that I could control from the keyboard. When it was time to hear dialogue, all I had to do was flip the switch. (Dennis had helpfully written ON in red ink on some masking tape.)

I got to the theater a little early to test it out and it worked like a charm! We just had to check the levels and then were good to go. During the actual performance, the only thing left to chance was me knowing when the dialogue sequences started and stopped. Fortunately, I didn't suffer any brain cramps, and managed to flip the switch at the right moments.

Well, almost. The only transition that was a little messy was after the first dialogue sequence, where the scene shifts to exteriors of Paris, with U.S. troops marching in the streets. Even before the title comes up, the soundtrack carries a blaring brass band rendition of 'You're In The Army Now,' which then continues underneath the scene. 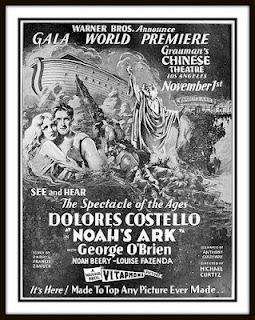 I didn't get to the switch until after the brass band made its entrance, so how to avoid an abrupt cut-off? Thinking uncharacteristically quickly, I borrowed a page from fellow accompanist Andrew Simpson (from the recent Cinefest confab) and started playing underneath the recorded sound, by some luck matching the key. (It's a pretty simple tune.) Add in some crashing percussion, and it quickly covered the mono sound track, which I then turned off. Voila!

One of the hallmarks of silent film is how it allows audience members to fantasize about elements such as voices, which is all part of the deeply personal and emotional experience a silent film can create. So in 'Noah's Ark,' I was interested to see what the effect of suddenly hearing voices on screen would be.

Well, it didn't completely shatter the spell. But the dialogue, and the way it was delivered, didn't help. Right off the bat, Dolores Costello declaims a doozy: "Oh Travis, isn't it wonderful that train wreck brought us together?" This attempt at romance remains distinctly earth-bound, with Costello and O'Brien speaking like they're students in an elocution class and then unintentionally comic French soldiers ("Oooh la la!") getting in on zee act.

Alas, it drew laughs from our audience of about 100, but not enough to completely ruin the film's dramatic energy. Before long, we were back in silent film land, with a powerful dramatic scene similar to the "taking leave" sequence in 'The Big Parade' (1925), in which O'Brien impulsively joins his countrymen marching through Paris, leaving Costello and emotional wreck as she searches for a glimpse of him among the hordes of soldiers rushing through the streets. 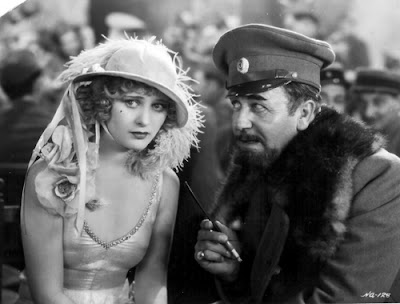 The other dialogue sequence involved heavy use of Noah Beery (with a name like that...), the film's heavy, who has a remarkably effective voice (deep and rich, almost like Boris Karloff in 'The Grinch Who Stole Christmas') that comes through splendidly, considering the limits of early talkie mono sound. And the key scene in which he threatens Costello lends itself to dialogue, even if takes place in a loud dancing hall and involves a little too much raucous music for my taste.

And then the film shifts back to silence, as Costello plans her escape in lieu of a rendezvous with Beery, a scene that worked really well, I thought. I don't know why, but it didn't seem jarring at all to see Beery suddenly appear again (a few moments after hearing him speak) and see his renewed threats repeated via intertitle, with only his acting and my music to amplify them appropriately. 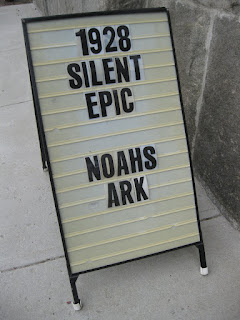 Somehow, it jacked up things to another level, making me think there might be some kind of dramatic energy in part-silent/part-sound films, along the same lines that Buster Keaton once imagined using sound: as a partner in telling the story, but not a constant companion.

This dual-status might have been more effective overall in 'Noah's Ark' if the dialogue was done a little more naturally. My guess is that they just didn't know how to do movie dialogue at that point, just like some theater actors at first didn't know how to act for the screen. It seems like they were striving for the "cultured enunciation" mocked so effectively many years later in 'Singin' in the Rain.' Moses supposes his toeses are roses. In 'Noah's Ark,' there's one moment where George O'Brien seems to forget a line and then laughs it off, and it's the most spontaneous and natural thing in the sound sequences. 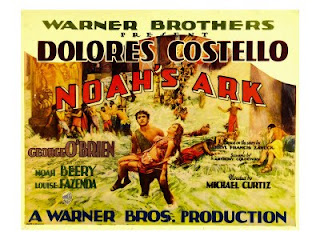 In any case, the last 20 minutes of the picture, when we finally get to the Noah's Ark story, are flat-out amazing, with all the contemporary characters assuming Biblical roles, something like a Simpsons parody. Though it was hard to take George O'Brien seriously in his Tarzan costume, and the stock footage of elephants and warthogs and other creature making their way to the ark is a little hard to take, the whole thing works marvelously in a theater with an audience.

For music, the flood sequence built nicely, from small stirrings (it's mostly wind at the start) to incredible scenes of people being literally washed away by gigantic columns of water crashing down from all directions. Even a few obvious "process shots" and some dicey superimposition at the climax don't take away from what we actually see happening right before our eyes: destruction, panic, and enough water to fill Lake Erie. It's a grand few minutes, some of the biggest in all of silent film, and a wonderful send-off to a medium that itself was in its dying days.

Perhaps because of its status as a transition film (rather than a pure silent), Noah's Ark hasn't really been known as one of the classic silents, even though it was a success for Warner Bros. at the time of its release. Well, whatever the reason for its obscurity, 'Noah's Ark' seems to contain the DNA of a lot of iconic Hollywood moments to come. Afterwards, a group of us picked out everything from Dolores Costello on a platform in heavy chains anticipating 'King Kong' to the villain in 'Raiders of the Lost Ark' suffering a hand injury, which is what happens to Beery both in contemporary times and in the Biblical flash-back.

How ironic that this ambitious picture was released at a time when silent pictures were being swept away just like...well, you know.
Posted by Jeff Rapsis at 10:02 AM