Report from Cincinnati:
Buster's 'The General' scores a victory 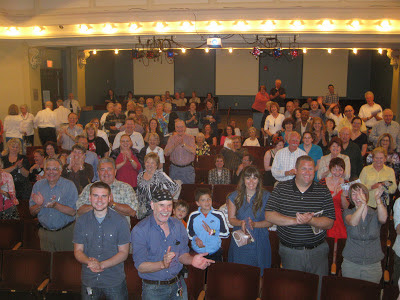 Well, no matter what else happens in my life, I can always say I got a standing ovation in Cincinnati.

It happened on Thursday, May 2, when I did music for a screening of Buster Keaton's 'The General' (1927) at the Carnegie Visual and Performing Arts Center in Covington, Kentucky, just across the Ohio River from Cincinnati.

Built as a library, the Carnegie is now home to galleries and a wonderful small theater that boasts a full calendar of shows and events. Silent film with live music is a recent addition, and 'The General' is what brought me in from New Hampshire. Because I was using the Korg and all my sound equipment, I drove. (It's just under 1,000 miles—nothing at all, really.)

I pulled into Cincinnati mid-afternoon the day of show, crossing the big bridge that carries I-71 over the Ohio and descending an alarmingly steep ramp that deposited me in the narrow streets of Covington.

Surprise! The area was filled with block after block of historic brick buildings. I imagine the town long played second fiddle to the big city across the river, but these days Covington looks pretty good: small businesses, restaurants, gentrification. It's a place worth exploring.

But there was a show to do. Backing the Subaru up to the Carnegie's stage door, I was just in time to meet "Blue," my helpful tech guy. Load-in was quick and before I knew it, we were ready to go. 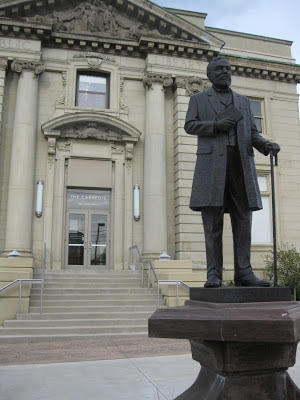 Here's the center, with a statue of benefactor Carnegie himself standing guard out front.

Another surprise: They not only wanted me up on stage in full view of the audience, but also lit from above with a spotlight, which I imagine looked like some sort of transporter beam to the audience.

I asked about moving to a less visible place, as I always feel my efforts should support the movie, and not draw attention to myself. But no—they wanted me up there, in plain sight, to emphasize the "live-ness" of the music. Unusual, but it's their show, so no problem. 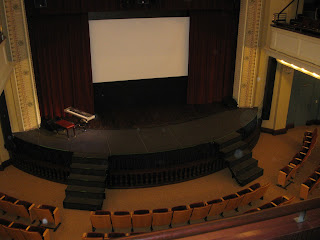 The two-level Otto M. Budig Theater is a wonderful small-sized venue. (The above photo was taken from the balcony.) It reminded me of some of those great small theaters in London's West End. The picture above, with the lower level filled with people, made me think of the Muppet Show theater.

Considering how many things could have gone wrong in a 1,000-mile journey (car trouble, construction delays, getting lost), my timing was pretty much right on, which for once made me feel something like professional.

Indeed, I had enough time for an unhurried drive back over to Cincinnati to check in at the Garfield Suites, where I showered and changed before heading back to the Carnegie for the evening's performance. You'd think I was always this organized. I even had time to stop in and speak with the ushers. Here they are below, a handsome crew! 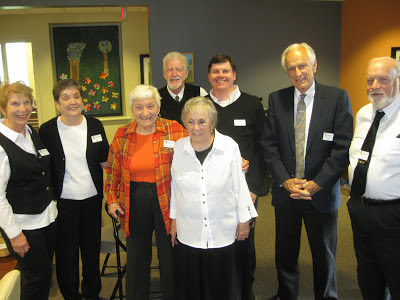 Well, the lack of pre-show stress and anxiety paid off, apparently. The show was at 7:30 p.m., and so climbed up onstage and sat down at about 6:50 p.m. to start some music going. Almost immediately, I felt comfortable and confident, in the zone, and never really looked back.

Sometimes that happens, and it's great when it does.

The house opened at 7 p.m., but I barely noticed. Im warming up, I had expected to stick with a simple organ setting so as to make the sound of the film score that much more impressive and dramatic when the movie started, but instead I used the full orchestra right off the bat, and found myself getting into some heavy and dramatic stuff, mostly based on 'Dixie' and 'Yankee Doodle,' which I sometimes draw from in accompanying 'The General.' 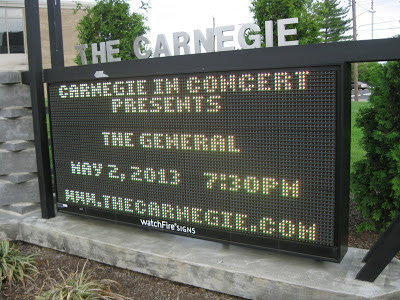 Finally, Blue poked his head from somewhere and gave me a two-minute warning. I rolled things up to a dramatic finish, then ducked behind the curtain to wait for Joshua Steele, the Carnegie's theater manager (and who arranged my booking), to say a few words.

And there he was, backstage as planned! Don't you love it when things go like this? But it was turning into that kind of night. I pulled back the curtain for his entrance to introduce me, and the next thing I know, I'm greeting a theater full (well, not quite full) of folks there to experience silent film as it was intended to be shown—in a theater on the big screen, with live music and (most importantly) an audience.

When 'The General' started, the flow continued unbroken. Music fell right into place during the credits, and stayed on track (har!) from the opening sequence onward. I was careful to hold back, which is important for most films, especially comedies and especially for Buster's, as too much too soon can inhibit the audience reaction.

But that wasn't a problem. Response was strong right from the beginning. You know it's going to be a good screening when the little march of Buster and the two kids, followed by Marion Mack, up to the front door produces giggles, and then a belly laugh when Buster turns around to find his girl outside the house, standing behind him.

Seeing (and hearing) that, I settled in for a good ride, still being careful to keep things under control so as not to step on the film. In 'The General,' things really start to click, I think, when the scene switches to the Northern encampment. It's a straight dramatic scene, and the right kind of music (ominous, foreboding) can add quite a dimension to it.

This sequence, played entirely straight, serves to raise the stakes, making everything Buster does afterwards more thrilling and exciting, I think, because an underscoring of life-or-death danger has been introduced. That's what I see on the screen, anyway, so it's what I aim to reflect in the music.

And that's the tone I try to hold for the rest of the picture, throughout the out-and-back double-ended train chase that forms the heart of the film, and especially during the quiet scene behind enemy lines, which functions kind of like an eye in a storm (for once, no trains are moving) but actually has just as much tension as anything else in 'The General.'

In terms of reaction, you couldn't ask for more from an audience. We had full-throated cheers even during the "outbound" chase, such as when Buster's cannon fires and by accident hits the train he's pursuing. (Staged in a single shot, it's one of the miracle scenes in all of silent film, I think.)

So musically, it's a paradox. 'The General' is filled with elaborate Keaton gags intended to produce laughter. And it does. But for my taste, the film seems to work even better—both as a comedy and as a story we care about—when the music is essentially serious. The music doesn't need to be funny by itself: better for it to be like Keaton's face.

Also, I do my best to keep it moving, just as Keaton the director keeps the trains in motion. So I chug along in dramatic mode, throwing in scraps of 'Yankee Doodle' in a minor key, or stretched out double or quadruple length in the bass or way high up.

But get this: Once we're well into the film, islands of business occur where the music can be funny. Example: during the "inbound" chase, when Marion Mack tries sweeping up the locomotive's grimy cab, and then rejects a log because of a knot and instead tosses a twig into the firebox, I think the sequence plays better when the music turns light and whimsical.

I think this is partly a question of balance and contrast. Keaton's character has been through so much already, and the tension has been non-stop, so throwing in some lighter music functions as a breath of fresh air, which keeps the audience from wearing out or possibly wandering.

Wow—and as I write this, I have to point out that all of this decision-making happens in the moment, musically, as the film unfolds. It's what feels right. This is just deconstructing it after the fact.

So we had a real three-way conversation going there for the better part of an hour: Buster, the audience, and me. And yes, it got to that point where you're getting close to the end, and you know it's gone well, and you actually project through to the finish and almost know what you're going to play for the remaining minutes, and at that point you can relax a little and take pleasure in something that's gone well even as it's still playing out.

There it is: The End. And I keep the music building, giving a sense of a journey completed, and even indulge in a little false chord cadence before closing things up with a good strong finish.

And what a reaction! People hooting and hollering! Cheering, even! And it doesn't stop. I take a bow. The house lights come up. Another bow. I move to center stage, wipe my forehead, and take yet another bow, and still the ovation continues.

I know it's really for the picture—and for Buster. But I'm so pleased to help bring it to life in this manner, with all these collaborators. We did it together, and it's immensely gratifying to me when it goes like this.

And still they were applauding! I finally tip-toed back to my keyboard and picked up the camera I had there with my other stuff and scooted back to center stage. The applause started to fade, but I pointed the camera out into the audience and yelled "Wait, don't stop now!", getting a big laugh.

And I snapped the shutter, and the photo is what you saw at the beginning of this little essay. It's screenings like these that make all the effort worthwhile, and I'm so grateful to everyone at the Carnegie and the Covington/Cincinnati community for making this possible. Hope I can return there for another show at some point in the future!