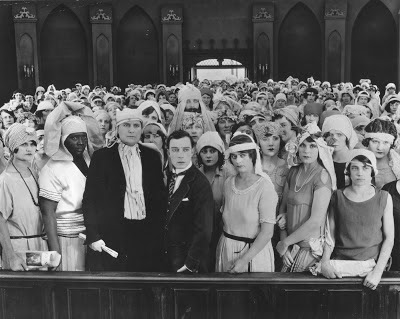 Buster and his army of would-be brides can still crack up the middle school crowd.

Did you know kids don't learn to read or write in cursive anymore?

Well, school is where you're supposed to learn, and that's something I learned last week during a spate of accompaniment gigs that took me to a couple of local public schools.

The revelation that kids aren't learning cursive came during a screening of Buster Keaton's 'Seven Chances' (1925) at Antrim (N.H.) Town Hall, where each spring I do a program for students at nearby Great Brook Middle School.

When Buster's girlfriend composes a simple handwritten note on-camera, I was surprised when the program's coordinator, Mrs. Maryanne Cullinan, read the note out loud "for those of you who don't know cursive."

Don't know cursive? Really? Turns out that cursive has apparently become a casualty of the keyboard. Districts in all parts of the nation have quietly abandoned the teaching of cursive, which is seen as increasingly irrelevant and not worth the time and effort. "Keyboarding" is in, cursive is out.

Wow! Onward marches the human race, I guess. But that's one more little thing that makes silent film more of a curiosity that has to be explained. (The same thing could be said about me as well!) I used to imagine myself in old age reminiscing about getting through college using a typewriter and Korect-O-Type. Now I can add "we used to read and write in cursive, too" to my old fogy repertoire.

The good news is that unfamiliarity with cursive didn't stop the students from completely embracing 'Seven Chances.' Yes, they made some funny noises when Buster and his gal kissed on-screen (it's middle school, after all), but they were fully engaged from start to finish. The last 15 minutes (culminating with the rock slide) was greeted by constant, astonished laughter, to borrow a phrase from Walter Kerr's great book 'The Silent Clowns.'

Odd that Keaton himself thought so little of 'Seven Chances,' when I've found that audiences totally buy it. It, well, rocks. I'm looking forward to doing music for it at the next Buster Keaton Festival in Iola, Kansas this coming September, when I'm slated to be the house accompanist. (Hey, another rock reference!)

Another recent public school project wasn't silent film, but a distant cousin. It was doing underscoring for a live action high school play.

Last fall, I got a call from Fran White, who's in charge of the theater program at Merrimack (N.H.) High School, which is the town next door to where I live.

For her spring production, Fran was staging a dramatic adaptation of 'The Hunchback of Notre Dame,' and wanted to know if I'd provide musical underscoring to help it all hold together. She knew of me, and knew of the Lon Chaney silent film version, so I got the call.

The dates were open, so I didn't hesitate. Yes! I had just finished accompanying several presentations of 'The Moving Panorama,' a 19th century tapestry depicting the story of John Bunyan's 'A Pilgrim's Progress.' Presented by a museum in Saco, Maine, it was an interesting change of pace from silent film accompaniment, and I thought the high school production of 'Notre Dame' would be equally absorbing.

So next thing I knew, it was May, and I was being fingerprinted in the basement of the superintendent of school's office, a prerequisite for working with kids in the public schools these days. They'd been rehearsing for a couple of months, so the show was pretty much all together by the time I came on scene. 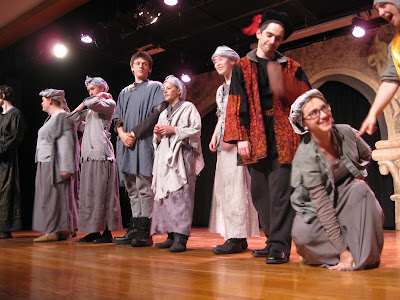 Some of the 'Hunchback' cast on stage prior to a run-through.

All it took was one session with Fran to go over where music was required (scene changes and the like), and then she left the rest up to me. So I set up my Korg synthesizer and there I was, doing what I usually do in a darkened theater, only now with real live actors and actresses on stage, and actually speaking lines!

And I found that the same dramatic instincts developed in supporting silent film also apply to stage productions, with the exception of the need for continuous music. And a little goes a long way: just throwing a bass note underneath an ominous scene can add a whole extra dimension to what's happening onstage.

So sometimes it's more like sound effects or atmosphere rather than full musical accompaniment. Interesting, and something I'd like to work on back in the silent film arena.

Because it was a stage play and not a musical, I had to be careful to avoid overdoing the music. And I had to be extra careful about not covering up any spoken lines, which I did by trying to keep any underscoring in different ranges than the voices of the characters. After we'd run through the show a couple of times, the only request Fran had was for me to not do any music during scenes with just two characters.

I really liked the way she put it: that the music was so strong and had such a presence that it was like a whole additional character, and so was too much for those scenes. Now there's someone who should work for the state department!

And the kids were great! Many cast members were seniors, and so the end-of-year sense of excitement was palpable. I'd lost track of what that felt like, but there it was! The whole scene brought back the best vibes of when I did a lot of theater, including playing Billy Bigelow in my senior class production of 'Carousel.' (I had hoped we would do Sweeney Todd, but no dice.)

My God, was that 30 years ago? But there we were all over again, reinvented as students at Merrimack High School, and now putting on 'The Hunchback of Notre Dame.'

If you worry or wonder about young people today, do what I did. Find a way to be involved in a local high school. It'll reaffirm the idea that most kids are capable and considerate young people with good heads on their shoulders and as full of dreams and possibilities as you were at that stage in life. (And I hope you still are.)

As I say about the college classes I teach, I get as much if not more from the students than they get from me. The same thing was true about doing 'Hunchback' at Merrimack High School. It was a very rewarding experience, and a thrill to help them put on a show that drew strong audience reaction for all three performances.

So best of luck to the graduates! I really enjoyed working with everyone, I hope you have a great summer, and to those going into the healthcare field, I really look forward to someday reminiscing about my typewriter while you care for me in some nursing home of the future. :)