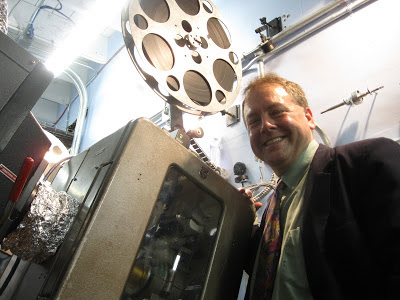 Here's me posing with 'The Thief of Bagdad' ready to roll in one of the Somerville's two Norelco 35mm projectors.

A few notes from a crazy burst of accompaniment: one that saw three big shows in four days. And in three separate states no less. And all this while I'm in the midst of doing underscoring for a high school production of 'The Hunchback of Notre Dame' at a nearby high school. So before it all disappears in a blur, a thought or two...

• Thursday, May 9 brought Fritz Lang's 'Spies' (1928) at the Flying Monkey Moviehouse in Plymouth, N.H., about a hour's drive north of home base. Healthy crowd of about 45 on hand for a film that's not one of the big titles, but I think should be. It's certainly a big film for music, not just in terms of length (2½ hours) but also in terms of possibilities. In scoring it, basically I wrung the hell out of two main themes: an "espionage" motif that I thought of as the "male" theme, and a nice flowing tune I recently come up with that worked great as the "female" melody.

The music fell together quite nicely, with lots of powerful modal stuff lending an elemental quality to the whole thing. Afterwards, two separate people came up and said they'd never been to a silent film screening with live music in a theater before, and had no idea at the level of tension and excitement that was possible. Indeed, 'Spies' is structured so that the last half hour is one exciting sequence after another. So overall, very satisfying.

• Saturday, May 11 saw 'Peter Pan' (1924) as the opening title in this season's silent film series at Brandon (Vt.) Town Hall, which is a 2½-hour haul one-way. But I don't mind because it's a great place for silent films, the organizers and the audience are all terrific people, and I love Sal's, an excellent little Italian restaurant I found on West Street in downtown Rutland. (Prior to the show, I had the chicken corn chowder.)

Usually attendance at the first screening of the season is light, but this time we more than doubled last year's figure with about 80 people on hand. A lot of kids came, including one little girl who sat right behind me and, shortly after the film began, dumped a whole bag of Skittles onto the wooden floor. Some rolled under me, but no harm done. First time I've ever had to deal with candy during a performance!

I don't know what it is, but Brandon is such an easy place to do accompaniment. I feel so comfortable there, and easily fall into the "zone." Saturday night was no exception: I've done 'Peter Pan' many times and have what I think is a good set of material for it. But even so, it was one of those nights where one good moment followed another. And that "audience participation" sequence, where Peter urges the audience to clap to save Tinkerbell, went over big time! It was all top-notch, everything worked out great, and people were so appreciative. It was a wonderful reminder of why I continue to do this.

• And the non Sunday, May 12 (Mother's Day!), I did music for a screening of 'The Thief of Bagdad' (1924) in 35mm at the Somerville Theatre in Davis Square, Somerville, Mass. (Just outside Boston, about an hour south for me.) Another 2½-hour epic, but this time projected on actual film (the print was from noted film scholar and restorationist David Shepard) via the expert booth technique of David Kornfeld, projectionist extraordinaire.

The show—the opening installment in what we hope will be a monthly series of silents in 35mm with live music—attracted a relatively sparse crowd (it's a big theater) of maybe 60 or 70 people. But they were a lively group, and it was a pleasure to hear the reaction to "Thief," which I think is a great film for an audience.

Unfortunately, for this one, I wasn't in the zone as much as I like to be. I don't know if it was performance fatigue or what, but I just wasn't on top of the film in several places. Also, it took me awhile to settle on material; I eventually wound up using some of the 'Spies' material from a few nights earlier, which to me is taking the easy way out. :(

Also, we hooked up the sound in a different way this time, and I wasn't quite happy with the levels and balance. David, way up in the balcony, said it sounded fine, and that was as far as we got, as he had a million other things to attend to beyond working with me. But I felt the on-stage speakers (responsible for 80 percent of the sound, it seemed) were distorting the low notes played at any volume. And the overall sound quality just wasn't as crisp as I like it.

We didn't have a lot of time pre-show to futz with anything, so I just went with it. But I can say now—if you do anything for 2½ hours, make sure it's something you enjoy doing. The fact that I couldn't just forget about the sound, and was always somewhat bothered by it, served to crowd out the music-making part of my brain, and I'm afraid the inspiration was occasionally somewhat lacking.

Note to self: Skittles don't matter. Quality of sound does.

Next up: This Friday, doing my annual silent film show at Antrim (N.H.) Town Hall for students of Great Brook Middle School. it's the fourth year, and these kids are turning into real silent film aficianados. (Note to programmers: Keaton wins hands down in popularity.) Also, in a change of pace, I'm doing musical underscoring for three performances of a stage version of 'The Hunchback of Notre Dame' at Merrimack (N.H.) High School. It's like accompanying silent film, except instead of film, it's real live people, and instead of them being silent, they talk. So the challenge is to keep the music low enough so it doesn't cover any dialogue, and also to support the story and shifts of mood. Should be a great show!

And then later this month I have two "new" films—new to me, that is, in the sense that I've never done live music for them. On Friday, May 24, it's 'Battleship Potemkin' (1925) at Red River Theatres in Concord, N.H., and on Sunday, May 26, it's 'Tell It To The Marines' (1926) starring Lon Chaney, in our annual Memorial Day tribute at the Wilton (N.H.) Town Hall Theatre. More on those later!