The calm before the storm:
Only a few screenings this month 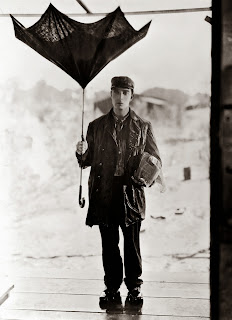 Buster Keaton prior to the cyclone that concludes 'Steamboat Bill Jr.' (1928).

The month of April, 2014 won't break any records in terms of the number of silent film screenings I do.

Only a handful of events beckon, although they're all worthy films that I'm looking forward to accompanying. I've listed them below for easy reference.

But I'm glad for a slightly relaxed pace this month, as things will start to pick up in May, and then get downright crazy after Memorial Day.

Get this: in June, we're restarting monthly silent film programs (in 35mm) at the wonderful Somerville Theater in Somerville, Mass.

Also, I'll be back to doing monthly screenings up in Brandon, Vt. for the summer season.

On top of that, I'm scheduled for two shows a month at the historic Leavitt Theatre in Ogunquit, Maine in a series that runs through the Labor Day.

And then, for a special series featuring the great animal stars of the silent film era, we're ramping things up to two shows each month at the Wilton (N.H.) Town Hall Theatre.

All that adds up to a lot of film.

So I'm taking the time now to work on some keyboard technique, and to develop fresh material that I can use for this summer's glut of screenings.

Ultimately, I'd like to see if I can create a new round of music that pushes my personal vocabulary for acccompaniment to a new level of fluency.

And the only way I know how to do that is how Harold Lloyd used to turn out one-reelers: do it often enough so you can find out what really works, and have it sink into your bones.

So get set for a quiet April, but an exciting time after that.

For now, here's a quick roundup of upcoming screenings to help all of us take care of any needed silent film fixes... 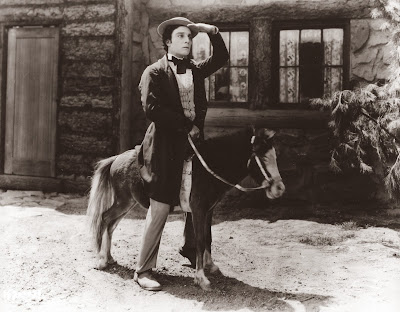 • Friday, April 18, 2014, 7 p.m.: "King of Kings" (1927); Red River Theatres, 11 South Main St., Concord, N.H.; (603) 224-4600; http://www.redrivertheatres.org/. Celebrate Easter weekend with Cecil B. DeMille's legendary adaptation of the story of Christ. An epic movie that served as a model for dozens of Biblical blockbusters to come. Silent film with live music at this popular venue for independent and arthouse cinema in New Hampshire's state capital. Admission $10 per person.

• Saturday, April 26, 2014, 8 p.m. "Steamboat Bill, Jr." (1928) starring Buster Keaton, Ernest Torrence; The College of Saint Mary Magdalen, 511 Kearsarge Mountain Road, Warner, N.H. Silent film program on the campus of Magdalen College. Pampered Buster returns home from college to help his father, a tough riverboat captain, battle to save the business; falling for the archrival's daughter doesn't make things easier. Climaxed by an eye-popping cyclone sequence. Plus companion feature 'Sherlock Jr.' (1924) starring Keaton as a movie projectionist and would-be detective who dreams himself into an on-screen whodunnit. Admission is free for Magdalen students and any others with college ID; general public admission is $5 per person.

• Sunday, April 27, 2014, 4:30 p.m.: "Destiny"(1921): Wilton Town Hall Theatre, Main Street, Wilton, N.H.; (603) 654-3456; www.wiltontownhalltheatre.com. Years before his classic 'Metropolis,' German director Fritz Lang brought this ground-breaking expressionist fantasy to the big screen. A strange tale in which human lives are each represented by a candle, and a figure representing 'Death' grants a woman three chances to rescue her lover from a premature demise. Part of a monthly silent film series with live music at a theater where movies have been shown since 1912! Admission free, donations of $5 per person encouraged.