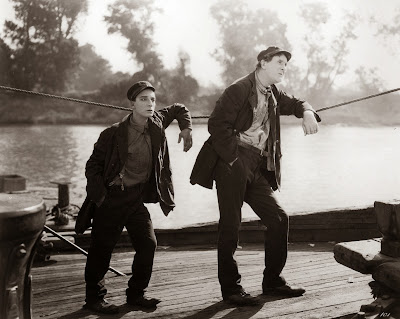 Buster Keaton hangs around with co-star Ernest Torrence in 'Steamboat Bill Jr.' (1928), to be shown on Saturday, April 26 at 8 p.m. at Magalen College in Warner, N.H.

Besides the usual round of press releases, I sent out notices to 60 different churches around Concord, N.H., but turnout for our screening of 'King of Kings' (1927) on Good Friday amounted to just 17 people. Hey, what's wrong with you church people? Where are your priorities?

Well, in retrospect, maybe it just wasn't the smartest idea to program a film about the final days of Jesus on what is one of the most solemn days of the Christian calendar. I thought it was, and so did the folks at Red River Theatres in Concord, N.H., where we screened 'King of Kings' in one of the facility's two large theaters rather than the small screening room where most silents run.

I'll try to resurrect attendance this weekend at Magdalen College, a small liberal arts school up above Warner, N.H. We're doing a Buster Keaton program on Saturday, April 26 at 8 p.m., and the public is welcome. For more details, see the press release below.

And the next day, I'm doing a film that's new to me: the early Fritz Lang fantasy 'Destiny' (1921). It'll run on Sunday, April 27 at 4:30 p.m. at the Wilton Town Hall Theatre in Wilton, N.H. I'm developing new material for this one, as it's unusual enough to merit special attention, and I plan to push the digital synthesizer in some unusual directions.

For now, here's the press release for the Keaton program this weekend at Magdalen College. Come one, come all! 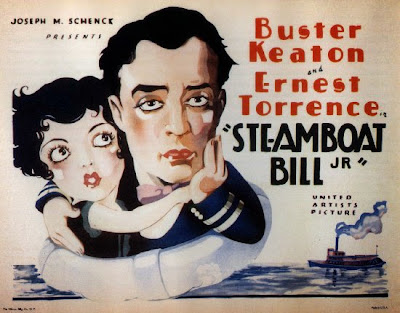 Buster Keaton's 'Steamboat Bill Jr.' (1928) is the featured attraction at Magdalen College in Warner, N.H. on Saturday, April 26 at 8 p.m.

Buster Keaton masterpiece to be screened with live music in Warner, N.H.; show open to public

WARNER, N.H.—Silent film with live music returns to the College of Saint Mary Magdalen this month with 'Steamboat Bill Jr.' (1928), a classic comedy starring Buster Keaton, one of era's top performers. 'Steamboat Bill Jr.' will be revived for one showing only at the college on Saturday, April 26 at 8 p.m.

The screening will allow attendees to experience silent film in the way its makers originally intended: on the big screen, with live music, and with an audience. The show is free to Magdalen College students and faculty; admission for the general public is $5 per person at the door.

In 'Steamboat Bill Jr.,' Buster plays the bumbling son of a riverboat’s rough captain. When a rival brings a newer boat to the river, the family is forced to face competition, just as Buster is forced to ride out a cyclone threatening to destroy the community. Can Buster save the day and win the hand of his girlfriend, who happens to be daughter of his father's business rival?

'Steamboat Bill Jr.' will be proceeded by Keaton's 'Sherlock Jr.' (1924), a shorter film that finds Buster as a movie projectionist and would-be detective who dreams himself into the whodunnit currently playing in the theater where he works.

The silent film presentation at Magdalen College aimes to recreate the era before movies were made with synchronized soundtracks. From about 1900 to 1929, films had no dialogue or recorded soundtracks. Instead, they were accompanied by live music at theaters across the country to around the world. Accompaniment could range from a small ensemble or just a single piano in small towns to full orchestras in big city theaters.

The screening of 'Steamboat Bill Jr.' and 'Sherlock Jr.' will feature live accompaniment by Jeff Rapsis, a New Hampshire-based composer who specializes in creating music for silent film presentations.

Rapsis will create the accompaniment on the spot, making up the music as the movie unfolds to enhance the action on the screen as well respond to audience reactions. He will perform the music on a digital synthesizer, which is capable of producing a wide range of theatre organ and orchestral textures.

Keaton, who grew up performing with the family vaudeville act, was known for never smiling on camera, an important element of his comic identity. A trained acrobat who learned at an early age how to take a fall, Keaton did all his own stunts on camera in the era before post-production special effects.

'Steamboat Bill Jr.' and 'Sherlock Jr.' will be screened on Saturday, April 26 at 8 p.m. at The College of Saint Mary Magdalen, 511 Kearsarge Mountain Road, Warner, N.H. The show is free to Magdalen College students and faculty; admission for the general public is $5 per person at the door. For more info on the music, visit www.jeffrapsis.com.