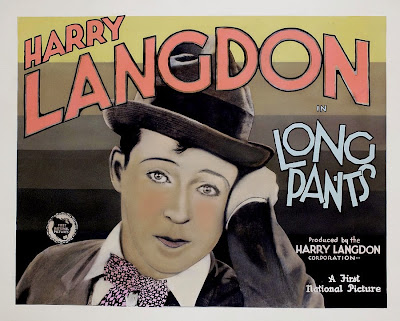 
Just a brief post to highlight an unusual film this weekend that I think is worth checking out.

The show is at 4:30 p.m. at the Wilton Town Hall Theatre in Wilton, N.H. Admission is free, although we encourage a donation of $5 to help defray expenses.

Who was Harry Langdon? He was a middle-aged vaudevillian who quickly shot to movie comedy fame in the last years of the silent era, that's who.

How popular was he? In a word, huge. For a time, he was regarded as Chaplin's only serious rival in motion pictures. His character, a baby-faced innocent man-child making his way in the sophisticated 1920s, struck a chord that really resonated at the time. His films, with stories created by a team that included a young Frank Capra, were big hits.

And yet as rapidly as Langdon's star rose, it fell just as fast. By the end of the silent era, Langdon was yesterday's leftovers.

For audiences who are new to Langdon, the point I try to make is that his comedy exists primarily in reaction to so much that was typical of silent film comedy.

Where other comedians would react violently to being hit on the head, Langdon might just go quiet, blink his eyes, and then quietly curl up on the nearest sofa or divan. (That's exactly what happens in 'The Strong Man' (1926), another Langdon feature that I accompanied earlier this week.)

And in 'Long Pants,' things are especially strange in that Harry, an obviously middle-aged man, plays the role of a teenage boy coming of age.

I've done the film once before, about three years ago, and it got a surprisingly strong reaction from a small audience in which no one had ever heard of Langdon before.

So I'm interested in seeing what kind of reaction 'Long Pants' produces on Sunday afternoon in Wilton, where we often get sizable crowds. (Plus, the weather is looking gloomy for this Sunday, which often boosts attendance at our screenings.) Come on and be a part of the experiment.

And because the film is only about an hour long, I'll run some unusual silent comedy shorts prior to the main event. Hope you can join us!
Posted by Jeff Rapsis at 7:02 PM