Just call me KYLE: Thoughts on departing
to climb Mount Kilimanjaro in Africa 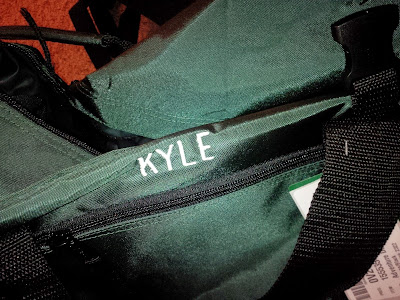 Okay, this has nothing to do with silent film music. But just in case anyone's wondering what I'm up to, here's a run-down. Silent film screenings will resume in late January.

"Vacation" is definitely the wrong word for this.

A better way of putting it might be: "Planned near-death experience."

How else to describe a journey that will take us far above treeline, into air with only half the amount of oxygen that we're used to, trudging across volcanic pumice and living for a week in tents but otherwise exposed to the elements?

By elements, I mean jungle rains followed by extreme cold (well below zero at night) and potentially stiff winds at all hours. And it all takes place under the intense equatorial sun, which gets more intense the higher we go (despite the cold) because there's less of the Earth's atmosphere to protect us.

Oh, joy! But this is what it takes to reach the summit of Mount Kilimanjaro, the highest point in all of Africa. And that's what I'm going to try to do, starting in a few days, with a group of 11 other intrepid adventurers.

Some I've known for years, other I'll meet for the first time at Amsterdam Airport. That's where we change planes on New Year's Day for our flight to Tanzania. Kilimanjaro lies just below the equator, and just south of Tanzania's border with Kenya. 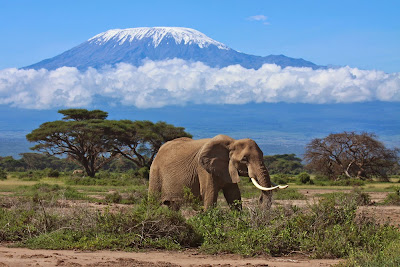 Kilimanjaro rises about 15,000 feet above the surrounding plains, making it the tallest free-standing mountain in the world.

We'll be joined by a support group of no less than 45 others—a team that includes our guide, five assistant guides, three cooks, and several dozen porters to carry in (and out) everything needed for the expedition.

We start on Saturday, Jan. 3. For seven days, we'll trek about 35 miles along the slopes of this gigantic dormant volcano, through five different climate zones. We'll slowly gain height, giving our bodies a chance to get used to the high altitude.

And it all culminates on Saturday, Jan. 10, when we'll be wakened before midnight. We'll then don our headlamps for the final overnight push along a ridge and up to the summit. It's done in the wee hours because the scree is frozen in place at night, making footing much easier, I'm told.

And if all goes well, we'll reach the volcanic crater rim about sunrise, and the actual summit (at 19,344 feet) a bit later. After spending only minimal time at the top, with its very dangerous lack of oxygen, we then make a quick descent, going down about 7,000 feet before the end of that very long day. 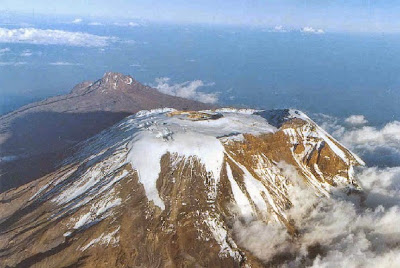 The summit of Kilimanjaro. You can see how it's a dormant volcano. We're aiming for the ridge on the right, Uhuru Peak, the actual highest point.

That's one big honking "if," of course. Any number of things could keep some or all of us from getting there. But it's doable. So we're doing it, at least trying.

So apologies to Yoda, who famously pronounced "there is no try." But then Yoda never attempted Kilimanjaro, as far as I know.

Doing it, or even trying to do it, requires equipment, including a duffel bag of a certain size, which I didn't have.

So I went shopping, and found that the local L.L. Bean store had several racks of returned canvas duffel bags at a hefty discount off retail.

The reason for the discount: all the returned bags had been personalized with embroidered initials or names!

So I looked through them, and narrowed it down to a dark green bag labelled "KYLE" in block capitals and a blue one with "Annemarie" stitched in cursive.

I chose KYLE because of the color, although I have to admit I'd feel a little funny using a bag with "Annemarie" on it to climb Kilimanjaro.

So KYLE, I don't know who you are, but the bag you rejected is going on quite a trip in a few days. 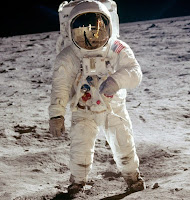 In some ways, it's kind of like the Apollo moon voyages some years ago. We spend all this time and preparation and effort to reach a very inhospitable place, where we stay for only a very short time before high-tailing it out of there and back to safety.

One way it's not like a 1960s moon voyage, however, is that we will be out of communication for most of our journey. With the astronauts, as far away as they were, at least they could always tell Houston if they have a problem. (Except for brief periods when orbiting the far side of the moon.) 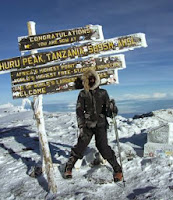 On Kilimanjaro, there may or may not be cell signals or what-not available. But I'm not bringing my cell phone and will be genuinely off the grid for more than a week.

There have been good omens. I went to a local credit union the other day to do some year-end banking for my mother, and the guy who sat down with me was from Zimbabwe, just south of Tanzania.

Also, I discovered a wonderful store, Travel & Nature Adventure Outfitters in Exeter, N.H. and was delighted to discover that proprietors Robert and Sue Garneau summitted Kilimanjaro on their honeymoon back in the 1980s!

Heck, even the guy that does my taxes climbed Kilimanjaro last summer. Everyone's doing it!

Most interesting of all, earlier this month I learned that the conductor of the New Hampshire Philharmonic, Mark Latham, is the grandson of the first Englishman to summit Kilimanjaro, which happened back in 1926.

Mark was gracious enough to have dinner with me and two other Granite Staters on our expedition, Dave and Patsy Beffa-Negrini.

He brought along his grandfather's vintage photo album from the actual expedition, which included photos of the guy hoisting aloft a frozen leopard he'd found at high altitude.

This discovery, widely reported and remarked upon at the time, became a symbol that inspired Ernest Hemingway to write 'The Snows of Kilimanjaro,' a mountain he never actually visited or climbed himself. Just like Yoda.

But that didn't stop him from constructing a novel using the mountain and the leopard as highly potent symbols for...well, here's a brief description from no less an authority than "Cliff's Notes":

"During his otherworldly flight over Kilimanjaro, Harry sees the legendary leopard. The dead, preserved leopard can be seen as a symbol of immortality, a reward for taking the difficult road. Harry himself was a "leopard" at certain times in his life, as were some of his acquaintances in his own stories. Specifically, Harry can be seen as a leopard during...

• His youth, when he lived in a poor neighborhood of Paris as a writer

• In the war, when he gave his last morphine pills for himself to the horribly suffering Williamson

• On his deathbed, when he mentally composes flashbacks and uses his intention to write

Some mystic impulse within Harry and within the leopard drove them to seek out God, or the god within themselves, or immortality that resided far from ugly, mundane reality.

In most civilizations, God or God's promise of immortality resides on the highest mountain top: Mount Olympus for the Greeks, Mount Sinai for the Hebrews, Mount Fuji for the Japanese. If the leopard was searching for some sort of immortality, then it found immortality at the summit of Kilimanjaro, where it lies frozen — preserved for all eternity.

When Harry looks at Kilimanjaro, he sees it as a symbol of truth, idealism, and purity. When he dies, tragic irony exists. The leopard died in a high, clean, well-lighted place; Harry, in contrast, dies rotting and stinking on the plains, lamenting his wasted life and his failure to complete his desired projects.

I'm not reading Hemingway's book, or doing any other kind of advance mental preparation for this adventure, other than to try to clear my mind of all expectations. I'd like to remain as open as possible to what I discover on my own.

I know I'm looking forward to the night sky on Kilimanjaro. Because of the high altitude and the lack of human-produced light pollution, I'm told it's unlike anything visible where I live in North America.

I'm looking forward to looking down on the clouds, if that happens. I'm told it's very similar to what you see outside the window of a plane, only without the plane.

But most of all, I think I'm looking forward to the experience, and seeing if I really can do this. I'll figure out what it means later on.

Heck, I might even change my name to KYLE.