Planes, trains, and automobiles! Plus
Keaton's 'Cameraman' on 4/16 in Salem, N.H. 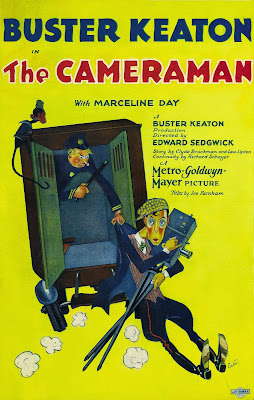 Coming up next: 'The Cameraman' (1928), one of Buster Keaton's best features and a personal favorite.

I'm doing live music for it on Thursday, April 16 at 7 p.m. at Kelley Library in Salem, N.H. Details below.

But first...well, it's one of those times where there's just not enough time to cover all that's going on.

Consider: the past week has found me at such diverse places as Northeastern University in Boston, where last night I braved a minimum wage protest to accompany 'Nosferatu' for a very enthusiastic audience, to the Niles Essanay Silent Film Museum out in San Francisco, where last weekend I accompanied 'The Italian,' an intense early melodrama. Also on the program: Chaplin's 'The Tramp,' which was filmed just a short distance away, on the 100th anniversary of its release. 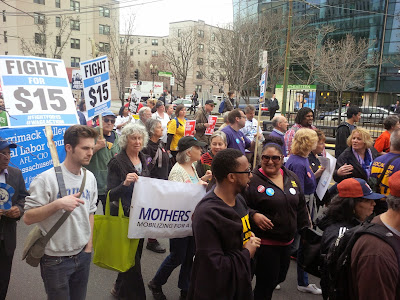 The minimum wage protest march on Huntington Avenue in Boston.

And this weekend I'm heading down to Washington, D.C., where on Saturday I'll make my accompaniment debut at the Packard Center of the U.S. Library of Congress, doing music for Gloria Swanson's 'Zaza' (1923). But not before doing music for Buster Keaton's 'The Cameraman' (1928) tomorrow night at a different but no less important library—the one in Salem, N.H. 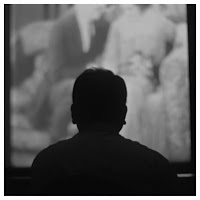 And all this comes after a great screening last week of Keaton's 'Three Ages' (1923) at the Flying Monkey Theatre up in Plymouth, N.H., where we were joined by the crew from Merge Creative Media who are putting together a documentary on the enduring popularity of Keaton's work. (At left is a silhouette of me they took accompanying Keaton.)

To get the latest on their efforts, check out their Facebook page. They'll be back up in this part of the world for 'The General' in Wilton, N.H. on Sunday, April 26, and then again in June for a student program I'm doing out at Great Brook Middle School in Antrim, N.H.

So it's a time of planes (out and back to San Francisco), trains (down to D.C.), and automobiles (everywhere else) for me. But so far I haven't run into any shower curtain ring salespeople.

One thing I did run into was the new video-conference option at the Hertz rental car counter at the San Francisco airport. I've tried this once before and didn't care for it, but the line to interact with an actual person was so long, I allowed myself to be steered to it once again.

The guy on the screen was in Tucson, Ariz. And yes, I know agents are trained to take customers through a series of questions to make sure no opportunity to sell more is missed. But there's something about the remote video thing that fails to communicate that a customer (me) is tired, grumpy, and just wants the car.

Hence a prolonged interaction in which my cheery new friend in Tucson wasn't able to pick up any cues that I was not in the mood for the lengthy interrogation that his script apparently called for.

Somewhere while trying to upsell me on car make and model (no), insurance I didn't need (no), and a $39 gas fill-up policy that was automatically added without asking me (and which I had to ask him remove), came this exchange:

Tucson: "Is your visit to San Francisco for business or pleasure?"

Tucson: "I need to know which so I can complete the registration."

Me: "Let's say business. I'm a musician here for a performance."

No, but I was about to become a shouter. I just wanted the car.

Note to Hertz: this may be more efficient in a corporate planner's perfect world, but not everything is better digital.

But a highlight of my quick visit to San Francisco was the chance to hear the Chamber Symphony of John Adams played by the San Francisco Symphony at Davies Hall, which I'd never been to before.

Here's a furtively snapped cellphone shot of what the place looks like from where I sat, which was actually behind the orchestra. 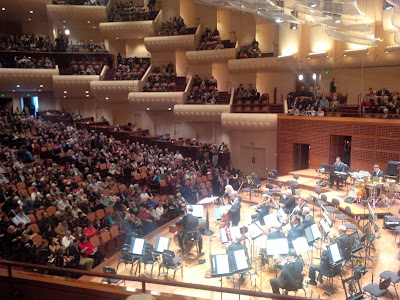 Paired with the Adams work was the Chamber Symphony of Schoenberg, on which the latter piece was modeled. I'm not a Schoenberg geek (there's still so much to learn!) but I was curious to hear the work because Adams described it as a big Mahler or Richard Strauss score put into a trash compactor.

That image alone is worth the price of 'Hallelujah Junction,' the memoir Adams published a few years ago. Highly recommended for anyone interested in how "classical" or art music works in our life and times.

So it was a musical pilgrimage of sorts for me, as Adams (raised in Concord, N.H.) has been based in the Bay Area for decades now, and the San Francisco Symphony is sort of his "hometown" orchestra.

So cross that one off the bucket list, even though from where I sat I couldn't hear the synthesizer part very well. Still, it gave me an immense amount of satisfaction and pleasure—so maybe I gave the wrong answer to that rental car guy after all.

And what about 'The Cameraman?' I'll get to it, but now the title of Buster's film has reminded me of a great idea I had while having lunch at a ramen place in Fremont, Calif.

You know how people in restaurants take pictures of their food and post it for all to see? Nothing wrong with that, but my impression is that among many practitioners it's become another mindless reflex that's kind of getting out of hand. Just like the remote rental car check-in, not everything needs to posted or to go digital.

Plus, it's kinda rude: "Look what I'm about to eat that you're not."

So an antidote of sorts occurred to me at the ramen place, where I'd pretty much finished lunch. Why not take a photo of the meal after it was eaten? Or, more accurately, a picture of what's left of the meal?

Ladies and gentlemen, I give you the newest online social media trend guaranteed to go viral: photos of restaurant meals after they've been eaten. 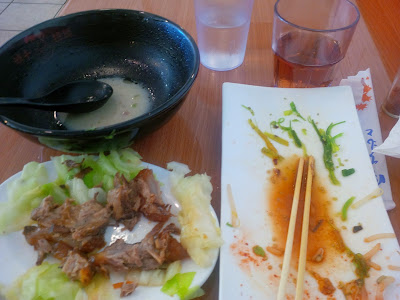 In this case, the scene is augmented by a side order of pork that I wasn't quite prepared to finish. Be honest: doesn't a photo like this come across as a lot more meaningful and satisfying than an uneaten meal?

Okay, here's more info about 'The Cameraman' in the form of a press release that went out, fittingly, on April Fool's Day. Hope to see you there! And come early, as the library has limited space. 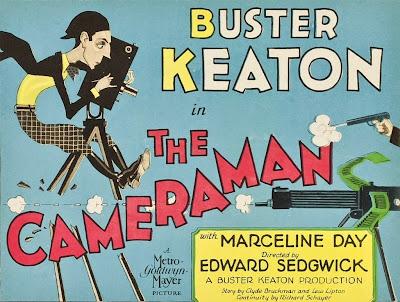 SALEM, N.H. —He never smiled on camera, earning him the nickname of "the Great Stone Face." But Buster Keaton's comedies rocked Hollywood's silent era with laughter throughout the 1920s. Acclaimed for their originality and clever visual gags, Keaton's movies remain popular crowd-pleasers today.

See for yourself with a screening of 'The Cameraman' (1928), one of Keaton's landmark feature films, on Thursday, April 16 at 7 p.m. at Kelley Library, 234 Main St., Salem, N.H. Admission to the screening is free and the public is welcome.

Music for will 'The Cameraman' will be performed live by Jeff Rapsis, a New Hampshire composer regarded as one of the nation's leading silent film accompanists.

The silent film screening at Kelley Library aims to recapture the magic of early Hollywood by presenting silent films as they were intended to be shown: in restored prints, in a theater on a big screen, with live music, and with an audience.

"If you can put together those elements, it's surprising how much power these films still have," said Rapsis, who improvises live music for silent film screenings throughout New England and beyond. "You realize why these films caused people to first fall in love with the movies." 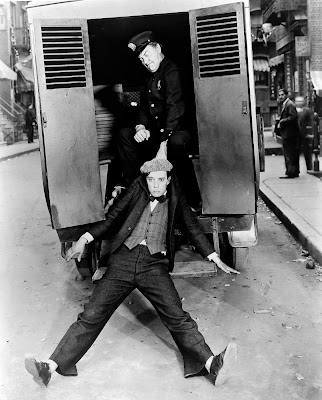 Keaton runs afoul of policeman Eddie Gribbon in 'The Cameraman.'

In 'The Cameraman,' Keaton uses the movie business to create comedy that plays with the nature of film and reality. The movie contains classic sequences often cited as among Keaton's best, including a scene where Keaton and a large man both struggle to change into swimsuits in a tiny dressing room. The scene, which runs several minutes long, was filmed in one take.

But while making films, Keaton never thought he was an artist, but an entertainer trying to use the then-new art of motion pictures to tell stories and create laughter.

"They weren't intended to be watched on a home entertainment center by, say, just you and your dog," Rapsis said. "However, if you can put all the elements back together, the films really do spring back to life."