Saying goodbye to Mischa Serykh:
a good friend taken much too soon 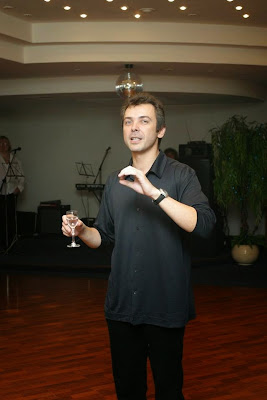 This is a post not about silent film, but about a Russian guy named Mikhail Serykh. (That's him above.) Mikhail, called "Mischa" by everyone, died unexpectedly this week.

I'm posting this here because Mischa often used this blog in teaching English. He did this because he lived with us in the United States for a good part of 1993. So all this time, my silent film musings have been a sort of "show and tell" for an audience of English students in Russia.

To all his students, and to everyone else who knew Mischa: we've lost a great man.

Sad to say, I hadn't been in touch with Mischa very much in recent years. But like everyone, he was on Facebook, and we had vague plans to visit him again in his home town of Belgorod, an industrial city of 400,000 people where I traveled to twice in the early 1990s as the Soviet Union was disintegrating.

And so it came as a complete shock earlier this week to have my own Facebook page suddenly flooded with tributes and pictures of Mischa. What happened? My heart sank and my face flushed as I realized from the tone of the messages what had happened.

Yes, he indeed had died: on Tuesday, April 7 at 7 a.m., according to a post by his brother. I don't know the cause. Mischa was only in his late 40s. I've gone through all the posts and the only info I can glean comes from vague references to doctors. I'll learn eventually, I suppose.

But whatever the cause and whatever the reason, Mischa is now no longer among us. And so I wanted to let his students and anyone else who comes across this post to know that he will always be remembered as a great friend and companion.

Whether it was searching the parched summer streets of Belgorod for beer (when was then brought in from the country in wagons) or driving him to Goffstown High School in America to be guest lecturer (he could earn $50 a day doing this, at the time a small fortune in rubles), Mischa was always fun to be around.

This friendly easy-going nature is what what compelled me to make use of his services as translator when I first went to Russia and my command of the language wasn't sufficient to interview the Mayor of Belgorod in his native tongue. (Little did I know the interview would consist entirely of drinking Azerbaijani cognac at 9 a.m., rendering translation services unnecessary.)

So Mischa came with me as I made my way from one appointment to the next, doing interviews for a feature story I was writing about life in Belgorod, which had become a sister city with Keene, N.H., where I worked as a reporter for the daily newspaper. When we weren't interviewing, we hung out together. Several afternoons were spent under a tree drinking the aforementioned country beer from an enormous glass jar as big as an aquarium.

It was a wild time, and so Mischa was there at moments that I'm sure will always be highlights of my own life. I came to Belgorod as one of the first Americans to visit the city since the end of World War II. Even after decades of communist propaganda, many ordinary Russians still looked at Americans as their brothers in breaking the back of the Nazi war machine. That was certainly true in Belgorod, which was destroyed by the Germans and was not far from the monumental Kursk tank battle that helped turn the tide against Hitler's advances.

And so I was met by people who made solemn promises on their father's deathbed that if they ever met an American, they would drink to his health. (Thus I found out how serious Russians can be about drinking.) Belgorod families vied to have me as their honored guest; children would band together and decide to offer me their most prized possession, which in one case was an adorable six-week-old puppy!

And Mischa was there for all of it. He was amazed and overwhelmed as much as I was, and so we became good friends. He spoke English well, and was eager to practice because there were few people in his orbit he could do this with. He had us over to his apartment to watch "Fawlty Towers" episodes with him, as there were some phrases he couldn't quite understand.

It was at Mischa's apartment that we entertained a middle-aged gentleman named Vladimir Babin, editor of Nash Belgorod ("Our Belgorod"), a brand new local newspaper, born in the spirit of glasnost. Babin wanted me to write a column about life in America for Nash Belgorod, and so for a couple of years I was a regular contributor to his pages, with Mischa translating.

Among the American gifts we brought were several Slinky spring toys, which our new Russian friends had never seen before. They found it amazing as it walked down stairs and did all the other things a slinky does. We even taught them the Slinky jingle: "...for fun it's a wonderful toy!"

We gave one to Babin's young son, who got it hopelessly tangled, which inevitably happens. Turned out dad had quite a temper, and blew up at what he considered a major faux pas. I'll never forget him shouting in Russian that "millions of American children play with this toy, and it only takes this idiotic child one moment to break it!" Thankfully, things were quickly smoothed over.

Despite his command of English, Mischa had never been outside of Russia, other than the time he served in the army and was sent to Cuba, which he described as "like Russia with palm trees."

So, to thank Mischa for all his help, we arranged for his airfare and officially invited him (necessary at the time for a travel visa) to come live with us for a few months in Milford, N.H. as a sort of do-it-yourself one-on-one exchange.

This was pre-Internet, when the only ways to communicate were by mail (very slow) or by tenuous long distance phone connection. (Belgorod is about 400 miles south of Moscow, near the Ukrainian border; calls into that part of Russia seemingly had to go through three different operators.) We would arrange for me to try calling on a certain day and time, and maybe one in three attempts I'd get through.

It was truly thrilling to reach him, hear his voice, and make plans. Often we'd spend most of the phone call (which inevitably would be cut off before we were done) making plans for the timing of the next phone call. I wonder how much of that magic has been lost in today's era of social media, instant communications, and so on.

Mischa arrived at Kennedy Airport in New York City in January of 1993, and thus began a great adventure for all of us. On the way back to New Hampshire, we stopped at a Grand Union supermarket in Connecticut, and Mischa became fascinated by how the doors would automatically open when someone stepped on a rubber mat, which he'd never seen before.

Being with Mischa once again produced encounters that I will always remember: Mischa at the Milford town meeting; Mischa discovering candlepin bowling; Mischa insisting that the United States had seven original colonies because of the "seven stripes on your flag." (He didn't realize we count the white ones.)

One really important side of Mischa was his devotion to the music of 'Queen' and Freddie Mercury, who was Mischa's own personal musical hero.

When I first met Mischa in the early 1990s, 'Queen' was about as dated as you could get in terms of pop music. So I chalked up Mischa's enthusiasm to a sort of Soviet cultural time lag.

But then later, Mischa's stay with us in America coincided with the release of the "Wayne's World" movie, which of course featured Queen's 'Bohemian Rhapsody,' which briefly propelled the group back into the commercial limelight.

So there's Mischa, newly arrived in the United States, visiting a Barnes & Noble bookstore with a gigantic Queen display dominating the front entrance.

"You see this!" he said, smiling contentedly. "I told you Queen was the most popular group in all the world!"

Our contact tapered off after his visit, as things will. I got a demanding newspaper management job, and ceased trying to actively learn Russian. Mischa went back to teaching English, and at one time was involved in a joint venture to export or import sausages, I think. (I can't remember.)

All along, I had the intention of returning to Belgorod someday to reconnect with Mischa and see how things have changed. It might even have been next year: 2016, the 25th anniversary of my first visit.

But now, if I go, there's one change I won't look forward to: Mischa's absence.

I hadn't seen him in a long time, and I don't know when I would have seen him next. But now he's gone, and I find I miss him terribly. He's one of these people that you assume will always be around. But now he's not.

To his students and friends and family: we have all lost a special person. He will always be remembered by those who knew him, but I know that's not much comfort when someone is taken from us so suddenly, and when so young.

Let us use the memory of Mischa to ensure we don't take for granted all the others who have touched our lives. Keep in touch. Make time. That's what I'll do.

And Mischa? Alas, not even a crackly tenuous phone connection could reach him now. But wherever he is, I'm sure he and Freddie Mercury are having one helluva great time together.