Needed: Audience members at 4/9 screening
to help out documentary on Buster Keaton 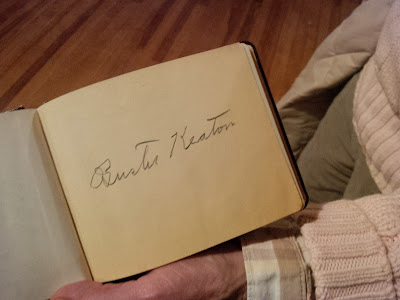 Buster's autograph as obtained by Linda Olmsted in 1956.

First priority: to plug a screening of Keaton's 'Three Ages' (1923) on Thursday, April 9, as a documentary film crew will be on hand to interview attendees about Buster.

So come along. What are you waiting for? The more, the merrier!

But first, a few highlights from a holiday weekend as packed with silent film adventures as a child's egg-filled Easter basket. 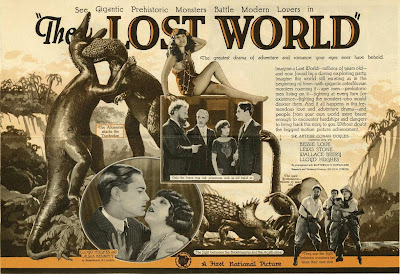 Just before the screening, a Red River staffer brought in an item from the collection of Barry Steelman, a well-known local movie buff and part of the Red River family.

I'll be darned: an original booking contract for 'The Lost World,' framed and perfectly intact, complete with full-color letterhead with artwork derived from the film's promotional materials.

But it was only the start of a weekend filled with unexpected artifacts... 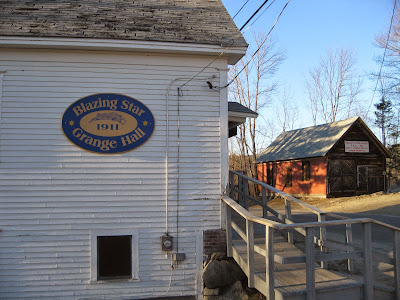 • Saturday, April 4: 'The General' (1927) at the hall of Blazing Star #71 Grange in Danbury, N.H. Small theater but packed with locals for what promised to be an unusual night out.

It certainly was for me. First, the Blazing Star's hall appears unchanged since perhaps the McKinley era, with the exception of modern wiring. Stern faces of Grange leaders from the pre-World War I Grange heydays stare down from the hall's wooden walls.

The small proscenium stage, still in working order, is home to an impressive collection of antique theater curtains and scenic backdrops, some of it original to the hall and some of it acquired from other small theaters. 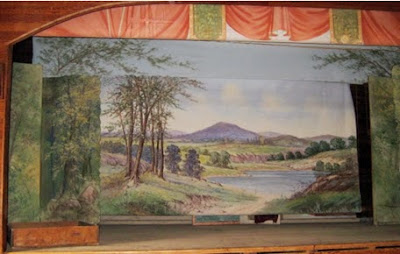 One of many antique scenic backdrops housed at the Blazing Star Grange Hall in Danbury, N.H.

A group of volunteers are working on conserving these rare artifacts. The ones on display are a sight to behold.

For the silent film program, the same people created a very substantial white screen, complete with wooden frame held together by clamps. Amazing!

As for the films: Buster rocked the house. It's always a treat to do a screening for such an appreciative audience.

But a highlight for me was when a woman approached me prior to the show with an old-time autograph book open to a particular page.

On it was written, in classic Palmer method script: Buster Keaton.

(I seem to have heard somewhere that Buster, who attended exactly one day of public school in his entire life, was functionally illiterate. I don't know if the very stilted penmanship of his signature bears this out, but it would be interesting to get it evaluated. Any volunteers?)

The woman, Linda Olmsted, said she was a Girl Scout in Manchester, Conn. on a field trip to New York City in the mid-1950s when she spotted Keaton on the street near what she thought was a TV studio.

So she asked, and Keaton obliged. And she still had the book, and Keaton's signature, after all these years. Again, today's word: Amazing!

Hultberg had contacted me earlier, wanted to let me know his grandfather was Rudi Blesh, Keaton's authorized biographer who was working with him just prior to Keaton's death in early 1966.

He has since sent along a note apologizing for not attending, but saying he's still like to show me something I might find interesting: one of Keaton's hats.

Geez, what is it with Keaton and Danbury, N.H.? After all this, it wouldn't surprise me if the Grange stove was the same one used in Keaton's two-reel comedy 'Hard Luck.' 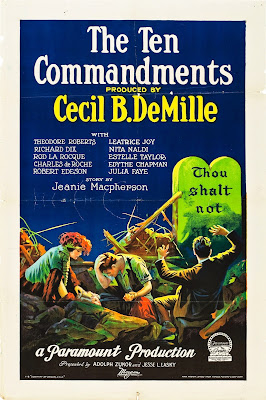 Thou Shalt Not Miss It: an original poster for Cecil B. DeMille's 'The Ten Commandments.'

• Sunday, April 5: 'The Ten Commandments' (1923) in 35mm at the Somerville Theatre in Davis Square, Somerville, Mass. About 100 people made a Biblical epic part of their Easter Sunday, despite my comments that the Archdiocese of Boston would not allow attendance to count as Mass.

Got to use my one sure-fire laugh line on this. To depict the parting of the Red Sea, technicians used large blocks of gelatin sprayed with water. My wife said it had to be strawberry Jell-O because, after all, it's the RED SEA. Har!

The film itself is a great one for music, I think: all broad gestures and a good amount of motion at varying tempos. I had five melodic cells picked out for this and wound up making heavy use of just two of them. Still, it held together and I felt it was one of my better efforts.

Okay, on to Buster Keaton's 'Three Ages' (1923) on Thursday, April 9 at 6:30 p.m. at the Flying Monkey Moviehouse and Performance Center in Plymouth, N.H.

Come one, come all! Because it would be great to have a sizable turnout so the documentary producers will have something to work with.

The filmmakers are Jessica Roseboom and Gavin Rosenberg of Merge Creative Media. Based in New York City, they're assembling material for a documentary on Keaton's silent comedy and how it continues to delight and mesmerize audiences nearly a century after it was produced.

For a good write-up of what they're doing, check out this story that ran on Sunday, April 5 in the Concord (N.H.) Monitor.

Or better yet, come to the screening and be part of the experience. For more info about 'Three Ages' and the program on Thursday, April 9, check out the press release below. 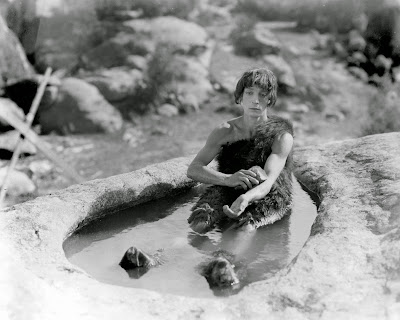 PLYMOUTH, N.H.—Audience members who attend next week's silent film screening at the Flying Monkey will have some unusual company.

A documentary film crew will visit Plymouth and the Flying Monkey Moviehouse and Performance Center on Thursday, April 9 for a screening of Buster Keaton's classic silent comedy 'Three Ages' (1923).

Titled "Buster Keaton: To Be Funny," the project has been actively underway for several months. Filming locations so far have included Tucson, Ariz. and New York City.

The Flying Monkey's screening of Keaton's 'Three Ages' prompted the filmmakers to come to Plymouth for the event.

During their visit, they plan to interview audience members and also film audience reactions during the screening.

"It's a real honor to have the Flying Monkey selected for inclusion in this project," Rapsis said. "Buster Keaton's films are always popular, but now there's an another reason for people to attend."

The program, accompanied by live music, will also include several Keaton comedy short films released prior to his jump into full-length feature films.

The three-stories-in-one approach was Keaton's first attempt at a feature-length comedy. If 'Three Ages' showed signs of box office trouble, Keaton planned to split it up into three shorter films to be released separately.

But the picture was a success, due primarily to inspired comic touches that still shine through to audiences today. 'Three Ages' launched Keaton's spectacular run of classic comic features that lasted until the industry's transition to sound pictures in 1929.

Keaton, one of the silent film era's great comics, was known for his ingenuity with gags, acrobatic stunts, and his trademark dead-pan manner.

'Three Ages' is the latest in a series of monthly silent film screenings at the newly renovated Flying Monkey Moviehouse and Performing Arts Center. The series aims to recreate the lost magic of early cinema by assembling the elements needed for silent film to be seen at its best: superior films in best available prints; projection on the big screen; live musical accompaniment; and a live audience.

• Thursday, May 21, 2015, 6:30 p.m.: 'The Count of Monte Cristo' (1922) starring John Gilbert. The original screen adaptation of the Andre Dumas swashbuckler about a man unjustly imprisoned who later seeks revenge. A film thought lost for decades until a print surfaced in the Czech Republic!

• Thursday, July 9, 2015, 6:30 p.m.: 'A Dog Double Feature' spotlighting silent-era canine stars Peter the Great and Rin Tin Tin. In 'The Sign of the Claw,' a police dog helps solve a crime wave. The only surviving film of Peter the Great, a popular German shepherd performer. 'The Night Cry' (1926) finds iconic dog superstar Rin Tin Tin accused of killing sheep. Can he find the real bandit and clear his name?

For more information on the documentary "Buster Keaton: To Be Funny," visit www.tobefunnythemovie.com