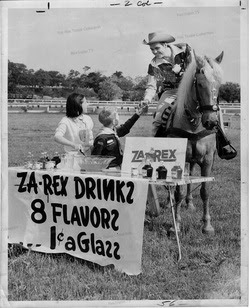 So the other day I was yakking with Peter Clayton, long-time owner/operator of the Leavitt Theatre in Ogunquit, Maine.

And I noticed his white T-shirt was emblazoned with the logo of 'Za-Rex,' a brand of fruit-flavored syrups that were popular in New England when I was a child.

"Peter, where'd you get that Za-Rex shirt?" I asked.

In answer, he turned around to show me the back of the shirt, which carried a stylized 1950s picture of a family enjoying Za-Rex-flavored drinks: a dad, a mom, two daughters, and a cute little boy.

What? Well, it turns out that Peter's dad was the guy behind Za-Rex! And way back when, he included images of his own kids (Peter's two sisters, and Peter) in the company's marketing. (Later came the company's mascot, Zippy the Zebra.)

This made me giddy. To any child who grew up within reach of Boston television in the 1960s and 1970s, Za-Rex was a hallowed name.

Though the brand had long since disappeared (people turned away from mixing their own beverages, either with Za-Rex or Kool-Aid powder), Za-Rex was very much alive in the large part of my brain still ruled by the marketing aimed at me as a kid.

But Peter told me the brand actually had been revived by two guys who bought the rights to it a few years ago. Check it out: http://www.zarexusa.com. I might order some for old-time's sake. (If I do, I'll try to resist drinking the syrup straight, as once was my practice.)

So in introducing Chaplin's 'The Kid' (1921) to our audience this past Thursday night, I also mentioned how delighted The Kid in me was to have just learned that the theater's owner was heir to the now-vanished Za-Rex empire.

It being New England, this earned a nice round of applause.

As a warm-up to 'The Kid,' the program included Chaplin's 'The Adventurer' (1917) and Arbuckle's 'Coney Island' (1917), mostly for its surfside atmosphere, so similar to Ogunquit.

Despite a nagging injury to my left-hand pinkie, the music came out well. In terms of textures, I progressed from piano only for 'Adventurer' to organ for 'Coney Island' and then full orchestra for 'The Kid.' I think it helps give each film a separate character, and using orchestra for the feature helps communicates its relative importance.

But no time to reflect as another show is coming fast down the track on Sunday, Aug. 9. It's the next in a series of railroad melodramas we're doing this summer at the Wilton (N.H.) Town Hall Theatre: 'Red Signals' (1927), an action-packed crime thriller starring Wallace MacDonald, Earle Williams, Eva Novak, and a cast of dozens, all of whom you've probably never heard of.

The railroad flick's we've screened so far this summer have all produced strong responses from audiences. They may be totally obscure, but they still do their job.

We'll finish the series later this month with one train-related film that's definitely not obscure: John Ford's 'The Iron Horse' (1924), the epic tale of the construction of the transcontinental railroad.

But first, climb aboard 'Red Signals' this Sunday at 4:30 p.m. Admission is free, with a suggested donation of $5 per person to defray expenses. 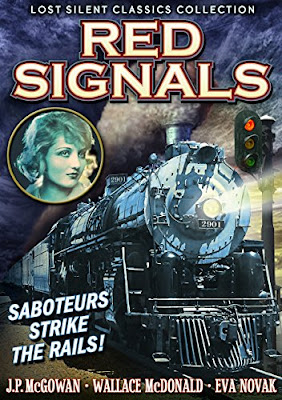 The action-packed film about sabotage on a western railroad will be shown with live music for one screening only, on Sunday, Aug. 9 at 4:30 p.m.

Admission is free, with a suggested donation of $5 per person to help defray the cost of screening silent film on the big screen with live music.

The plot of 'Red Signals': The Western Limited Railroad has suffered numerous wrecks recently and when headquarters learns that the wrecks have also been looted, they send in "Sure Fire" Frank Bennet to take over as superintendent and put things right.

After a chance meeting, Frank hires his wandering brother Lee to work for the railroad. Lee may be Frank's best chance against crooked railroad man "Take-A-Chance" McGuire, who is in cahoots with the former superintendent and has plans to get rid of Frank so they can continue robbing the railroad.

The train-themed movies in this summer's series are all fast-paced silent-era melodramas set in the world of big-time railroading.

"These movies were made at a time when cars and trucks were rare, and railroads were a part of everyday life across the nation," said Jeff Rapsis, a New Hampshire-based silent film accompanist who will provide live music for each movie.

"So the early studios capitalized on the public's close relationship with trains by churning out all kinds of railroad-themed pictures. In the silent era, it was a popular sub-genre," Rapsis said.

The series concludes on Sunday, Aug. 30 with 'The Iron Horse' (1924), John Ford's epic drama about building of the transcontinental railroad in the 1860s.

Silent-era railroad dramas are of particular interest to train buffs because they're filled with scenes of working railroads in action about 100 years ago, at a time the nation's reliance on the rail network reached its peak.

The Summer Train Film Series continues with a screening of 'Red Signals' (1927) on Sunday, Aug. 9 at 4:30 p.m. at the Wilton Town Hall Theatre, 60 Main St., Wilton, N.H. Admission to the screenings is free; a donation of $5 per person is suggested.