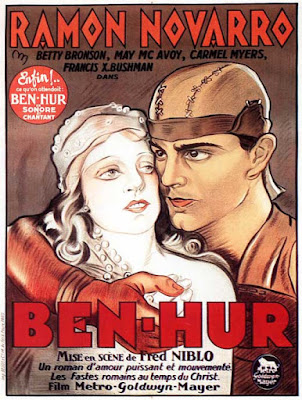 A little late in getting this posted, but tonight (Thursday, Aug. 20) brings a screening of the epic silent version of 'Ben Hur' (1925) at the Leavitt Theatre in Ogunquit, Maine.

'Ben Hur' is a great film for music, highlighted by the spectacular chariot race and an equally impressive naval battle.

I have some good material for scoring this one, and I'm looking forward to tonight's screening.

Truth be told, I'm still recovering from last week's four-shows-in-four-days marathon, which wiped me out.

More on those in a post-to-come, including one show in an old barn where the screen was an actual bedsheet and some audience members sat in a vintage sleigh!

But I'll be back at full strength tonight. So here's the text of the 'Ben Hur' press release with more info on the show.

Hope to see you there, heathens! 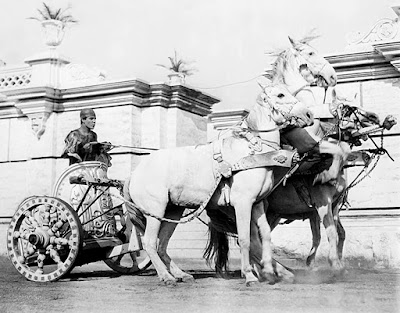 The famous chariot race sequence in 'Ben Hur' contains some of the greatest editing of the silent era.

OGUNQUIT, Maine—One of early Hollywood's greatest epics returns to the big screen with a showing of 'Ben Hur, A Tale of The Christ' (1925) on Thursday, Aug. 20 at the historic Leavitt Fine Arts Theatre in downtown Ogunquit, Maine.

The screening, with live music by silent film accompanist Jeff Rapsis, starts at 8 p.m. Admission is $10 per person.

'Ben Hur,' starring Ramon Novarro and Francis X. Bushman, was among the first motion pictures to tell a Biblical-era story on an enormous scale.

The film, which helped establish MGM as a leading Hollywood studio, employed a cast of thousands and boasted action sequences including a large-scale sea battle. The film is highlighted by a spell-binding chariot race that still leaves audiences breathless.

The enslaved family heir, Judah Ben Hur (played by Novarro, a leading silent-era heartthrob) is inspired by encounters with Christ to pursue justice, which leads him to a series of epic adventures in his quest to find his mother and sister and restore his family fortune.

The screening is the latest in the Leavitt's summer series of silent film screenings. The series aims to showcase the best of early Hollywood the way it was intended to be experienced: on the big screen, with live music, and in a theater with an audience.

"Put together those elements, and it's amazing how much power these films still have. You realize why these films caused people to first fall in love with the movies, said accompanist Jeff Rapsis, who will improvise a full score for the 2½-hour epic. 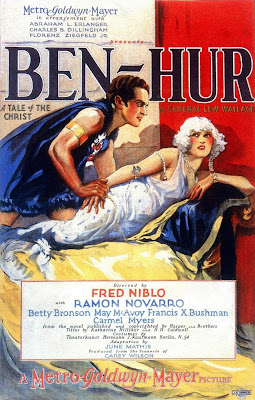 Besides Novarro in the title role, the film stars Francis X. Bushman as Messala, the Roman soldier who imprisons the Hur family; Betty Bronson as Mary, mother of Jesus; May McAvoy as Ben Hur's sister Esther; and Claire McDowell as Ben Hur's mother. 'Ben Hur' was based on the best-selling 1880 novel by General Lew Wallace, which interwove the story of Christ's life with the Ben Hur clan, a fictional Jewish merchant family.

The film was remade by MGM in the 1950s in a color and wide-screen version starring Charleston Heston that garnered 11 Academy Awards. Some critics believe the original 1925 version offers superior drama and story-telling.

MGM executives at the time, aware of the quality of the original version, attempted to destroy all prints of the 1925 'Ben Hur,' sending the FBI out to confiscate collector copies in the 1950s. However, the studio did preserve the negative of the 1925 version, so the film remains available today.

The silent film series honors the theater's long service as a moviehouse that has entertained generations of area residents and visitors, in good times and in bad.

• Saturday, Oct 31, 2015, 8 p.m.: 'The Lodger' (1927). A serial killer is on the loose in fog-bound London. Will the murderer be caught before yet another victim is claimed? Just in time for Halloween, suspenseful British thriller directed by a very young Alfred Hitchcock. The program is subtitled 'Chiller Theater' due to the theater's lack of central heating.