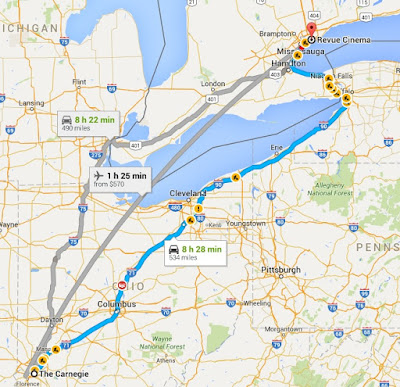 Geez! I could fly in much less time than driving, and avoid all that construction.

Perhaps it's fitting that Horace Greeley grew up in nearby Amherst, N.H., as I'm about to Go West!

(Yes, that's a Buster Keaton film. And a later one by the Marx Brothers. But I digress.)

Next week, I head west for my first-ever mini-tour of accompanying silent films at venues outside my New England base.

• Thursday, Dec. 10: A holiday-themed silent film program featuring Mary Pickford's 'Tess of the Storm Country' at the Carnegie Center in Covington, Kentucky. (It's just across the Ohio River from Cincinnati.)

But the Revue screening marks my international debut! It's the first time I've needed a passport for a gig.

I'm bringing my keyboard and sound system, so I'll be driving out and back.

I want to thank everyone at the venues for programming silent film with live music, and for their kindness in bringing me in to do the accompaniment for some great programs. 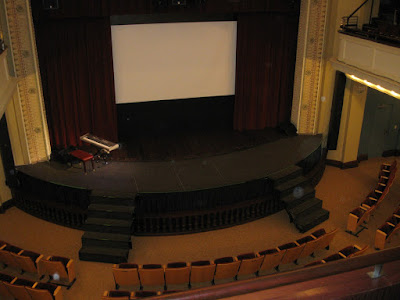 The Carnegie show got on the calendar first, based on a show I did there two years ago.

Since I would be driving there out and back, I reached out to a few other places that run silent film to see if anyone else could use me.

Turned out I was able to schedule two screenings in Cleveland and then another in Toronto—all on consecutive days, and all within easy driving distance.

Thankfully, the weather looks to be clear and calm into next weekend. Hope the forecast holds, which would allow me to get some running in while I'm on the road.

For more info on the screenings, I'm pasting in the text of a press release that I sent to some of the local papers in our area. As a tuba player, I understand the value of tooting one's horn when appropriate.

I'll be reporting from the road. For now, thanks to everyone who's encouraged me to accompany silent films.

It's evolved to the point where it's my major form of artistic self-therapy—a kind of musical wellness program that helps keep me sane.

As I sometimes joke: Blue Cross / Blue Shield should reimburse me! 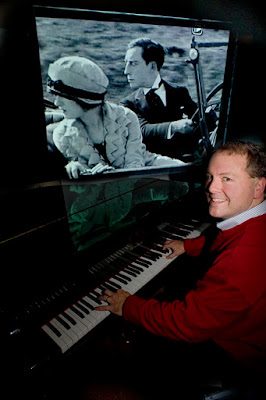 BEDFORD, N.H.—For a musician who specializes in a dead art form, Jeff Rapsis is one busy guy.

Rapsis, who improvises live musical accompaniment for silent film programs, will cap off 2015 with a pre-holiday tour of venues in the U.S. Midwest and Canada.

The tour finishes off a year that's seen Rapsis perform live music for more than 100 screenings of classic films from Hollywood's early years, before the era of synchronized sound and recorded dialogue.

Using a digital synthesizer that recreates the texture of the full orchestra, Rapsis plays his way through dramas, comedies, Westerns, thrillers, and all manner of pictures from the silent era.

Most shows are at venues close to his New England base: in New Hampshire, Maine, and Vermont, and at theaters in the Greater Boston area.

But December's Pre-Holiday Midwest and Canada Silent Film Tour will bring Rapsis to the Carnegie Center in Cincinnati, Ohio; two shows at the Cleveland Cinematheque in Cleveland, Ohio; and the Revue Cinema in Toronto, Ontario.

"These screenings are a great chance for me to bring the art of creating live music for great silent films to places where audiences may not have had a chance to experience it," Rapsis said.

Rapsis uses no sheet music for his performances, but improvises scores in real time while a film is being run. Typically, he'll use three or four musical elements and weave them together in real time to fit the film's actions and support the mood. 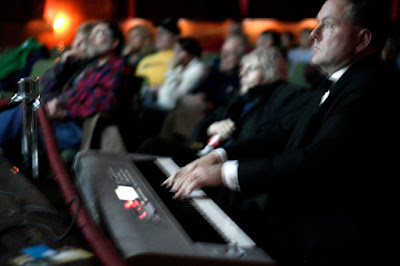 "It's kind of a high wire act, but I find it's the best way for me to stay completely with a film," Rapsis said. "When it works, it creates a bridge that helps modern-day audiences experience a film's intended impact."

At Cincinnati's Carnegie Center, Rapsis will accompany a holiday-themed program on Thursday, Dec. 10. The show includes early silent film versions of 'A Christmas Carol' and 'Twas the Night Before Christmas,' both produced by motion picture pioneer Thomas Edison.

The Carnegie program will be highlighted by 'Tess of the Storm Country' (1922), a full-length drama starring silent era icon Mary Pickford that features a holiday ending.

Rapsis will finish the tour by accompanying Fritz Lang's early sci-fi adventure 'Woman in the Moon' (1929) at the Revue Cinema in Toronto, Canada on Sunday, Dec. 13.

Rapsis, 51, is Associate Publisher and co-owner of the Hippo, a weekly publication based in Manchester, N.H. He's a native of Nashua, N.H.

A lifelong interest in vintage film and music led him to begin actively accompanying silent films in 2006.

"It's like I put chocolate and peanut butter together—two things I enjoyed were even better when combined together," he recalled.

To Rapsis, it's worth it.

"These are films that caused people to first fall in love with the movies," Rapsis said. "And they still maintain power to entertain and inspire audiences, if shown the way their creators intended: on a big screen, with live music, and in a theater with a live audience."

"Put those elements back together, and the films come to life, sometimes in surprising ways. Because the stories are told visually, it's really quite a different art form than what we have today in movies and television," Rapsis said.

The Pre-Holiday Midwest and Canada Silent Film Tour completes a year that saw Rapsis perform in a wide range of venues from coast to coast, including the Library of Congress Packard Theatre in Culpeper, Va.; the Kansas Silent Film Festival in Topeka, Kansas; and the Niles Essanay Silent Film Museum in San Francisco, Calif.

"It's great to find audiences for these films at screenings all over the nation," Rapsis said. "But it doesn't surprise me, as the films have a timeless appeal that transcends the era in which they were made."