Thanks to all for making 2015 a great year—
and a special shout-out to the audience! 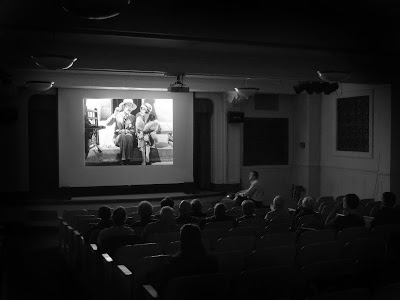 Nov. 10, 2015: Accompanying 'My Friend From India' (1927) with Franklin Pangborn and Elinor Fair on screen, at the Manchester City Library.

It might be a quiet week in Lake Wobegon. But it's been a pretty intense year in silent film accompaniment, at least for me.

Yes: 2015 brought the chance to create live music for more than 100 feature films at venues close to home and far afield.

I remain grateful for the local support for silent film with live music. It's a loyal band of silent film fans we have here north of Boston, one of whom snapped this amazing low-light photograph during a performance without me realizing it.

It's the best image ever taken of what I do, I think. To get the full effect, click on the picture to see it full size.

To all the people who turn out for these screenings, thank you so much. The audience is absolutely essential to recreating the silent film experience, and I appreciate the crucial part you play in the collaboration.

Thanks also to those who played a role in bringing me to venues this year that included the Niles Essanay Silent Film Museum in Fremont, Calif.; the Packard Theatre at the Library of Congress, the Cleveland Cinematheque, the Carnegie Center in Cincinnati, the Revue Cinema in Toronto, and so many other places.

I was especially honored to be invited to the last-ever Cinefest in Syracuse, N.Y., a festival that over the past five years has allowed me to meet so many people who work in the vintage cinema and film restoration.

And the Kansas Silent Film Festival, held each February at Washburn University in Topeka, Kansas, is always a highlight. Looking forward to the upcoming 20th annual edition of this great get-together!

In addition to the Kansas festival, the 2016 calendar already has some noteworthy silent film gigs.

Mid-January finds me doing music for 'Wings' (1927) at the massive Arisia Sci-Fi and Fantasy Convention in Boston, Mass. It's the last year for their traditional film program, so we're going out with all plane-mounted machine guns firing. 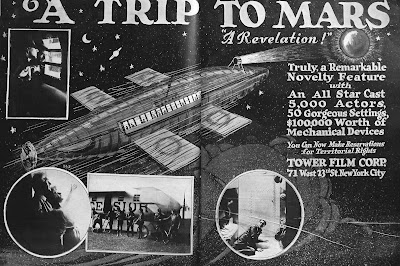 And in mid-February, I'll do live music at the annual Boston Sci-Fi Marathon (24 hours!) for a very unusual film, "Himmelskibit' (1918), an early flick from Denmark about mankind's first-ever voyage to Mars.

I'll be continuing monthly screenings in all the old familiar places, including the Wilton (N.H.) Town Hall Theatre, the Flying Monkey Moviehouse in Plymouth, N.H., and the "Silents, Please!" series (using only 35mm prints) at the wonderful Somerville Theatre just outside Boston, Mass.

And the summer will bring additional monthly programs at Brandon (Vt.) Town Hall and the historic Leavitt Theatre (since 1923!) in Ogunquit, Maine.

As we enter 2016, I'm fortunate enough to be traveling overseas, so no screenings until I return in mid-January.

But when I get back, the silent film music machine will restart with a vengeance, beginning with a screening of 'The Birth of a Nation' (1915) at 6:30 p.m. on Thursday, Jan. 14 at the Flying Monkey in Plymouth.

We're doing it in honor of MLK Jr. Day, and already I've been hearing from people who aren't too happy about that programming choice.

Looking forward to screening the film, which I think has a lot to teach us about race and discrimination and progress in this country. Maybe now more than ever.

But that's a topic for a whole other post in the new year.

For now, thank you to all who've supported silent film with live music during the past year. As I do this, I continue to be amazed—not just at the films themselves, but also by the fans today who pursue their passion for the field.

See you next year!