Not even the N.H. Presidential Primarycan stop 'Metropolis' on Friday, Jan. 29 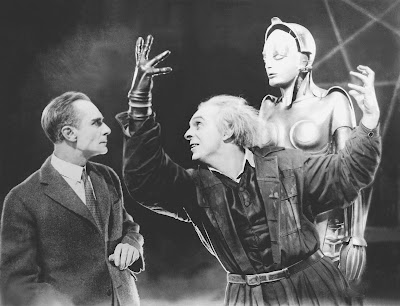 Up next: I'm doing live music for 'Metropolis' (1927), the futuristic sci-fi thriller from Fritz Lang.

We're running the film on Friday, Jan. 29 at 7 p.m. in Exeter (N.H.) Town Hall, which might seem familiar even if you've never been there.

Why? Because it's often used for political rallies. With New Hampshire's first-in-the-nation Presidential Primary coming up soon, the place winds up on the news a lot.

And why? Because the Town Hall's classic New England architecture makes for great visuals. And with competitive races in both parties, the place is in demand.

(And yes: I just checked with the Exeter Town Manager's office and the place is booked for Donald Trump on Thursday, Feb. 4; Marco Rubio on Friday, Feb. 5; Hillary Clinton on Saturday, Feb. 6; and possibly other dates and candidates that my addled brain can't recall.)

But not this Friday night, as we're doing 'Metropolis.' However, any candidate is welcome to take a break and attend our screening.

Hey, maybe he or she might get some ideas on how to better organize society. So if anyone proposes to improve communication by installing large mechanical gongs in all public spaces, you'll know where the idea came from. 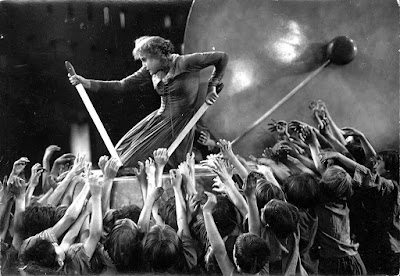 Below is a press release with all the info about the Exeter 'Metropolis' screening: who, what, where, when.

Hope to see you at the show! 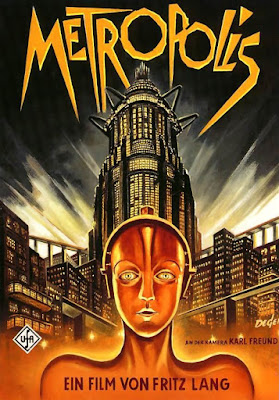 Landmark early sci-fi fantasy movie, with half-hour of rediscovered footage, to be shown with live music

EXETER, N.H.—A silent film hailed as the grandfather of all science fiction fantasy movies will be screened with live music on Friday, Jan. 29 at 7 p.m. at Exeter Town Hall, 9 Front St., Exeter.

Admission is free and the screening is open to the public. A donation of $5 per person is suggested, with all proceeds to support the Penn Program, a local homeschool co-op for students of high school age.

Music for 'Metropolis' will be performed live by Jeff Rapsis, a New Hampshire-based composer and silent film accompanist who performs at venues around the nation.

In reviving 'Metropolis' and other great films of cinema's early years, organizers of the Exeter Town Hall film series aim to show silent movies as they were meant to be seen—in high quality prints, on a large screen, with live music, and with an audience.

"All those elements are important parts of the silent film experience," said Rapsis, who will improvise an original live score for 'Metropolis' on the spot. "Recreate those conditions, and the classics of early cinema leap back to life. They featured great stories with compelling characters and universal appeal, so it's no surprise that they hold up and we still respond to them." 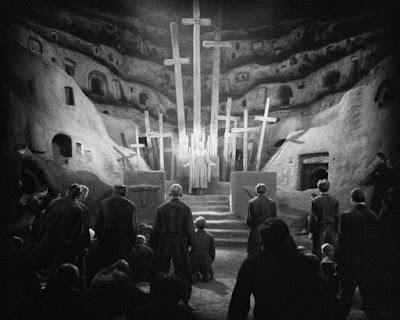 An underground church in 'Metropolis.'

The version of 'Metropolis' to be screened at Exeter Town Hall is a newly restored edition that includes nearly a half-hour of missing footage cut following the film's premiere in 1927. The lost footage, discovered in 2008 in an archive in Argentina, has since been added to the existing 'Metropolis,' allowing plot threads and characters to be developed more fully.

The discovery of such a significant amount of material called for yet another restoration, a 2½-hour version that debuted in 2010 to widespread acclaim. It's this fully restored edition that will be screened at Exeter Town Hall. 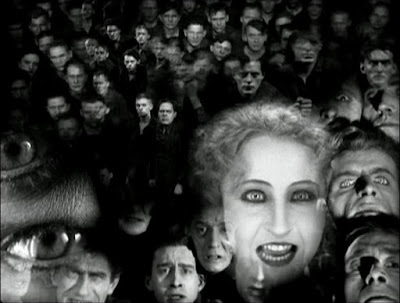 Expressionism on parade in 'Metropolis.'

" 'Metropolis' stands as an stunning example of the power of silent film to tell a compelling story without words, and reach across the generations to touch movie-goers from the real future, which means us," said accompanist Jeff Rapsis, who provides live music for silent film screenings throughout New England.

'Metropolis' is the first in a series of silent film screenings to benefit the Penn Program, a homeschool co-op based in Exeter designed to challenge and engage creative students of high school age.

The program, launched by educator and writer Andrew Lapham Fersch in 2012, seeks to explore new methods of education. The Penn Program emphasizes active involvement in a wide range of artistic and creative activities ranging from video production to stand-up comedy.

The Penn Program seeks to create a new model for integrating the arts into education, with the goal of fostering creativity, originality, hard work, dedication, kindness, and a spirit of giving.

"We felt presenting a silent film series was a great way to reach out and introduce ourselves to the community while bringing people together," Fersch said. "We're all eager to celebrate the creativity of early Hollywood in Exeter Town Hall, which is a great space, and we're doubly excited to be able to bring the community together to enjoy such a talented musician and wonderful movie."

Upcoming screenings in the silent series include:

• Friday, May 20, 2016, 7 p.m.: 'The Big Parade' (1925); Exeter Town Hall, 9 Front St, Exeter, N.H. MGM's landmark film, a sweeping drama about U.S. doughboys facing down death in the World War I trenches. Starring John Gilbert and directed by King Vidor, an epic that set the standard for generations of war movies to come.

The restored 'Metropolis' will be shown on Friday, Jan. 29 at 7 p.m. at Exeter Town Hall, 9 Front St., Exeter. Admission is free and the screening is open to the public. A donation of $5 per person is suggested, with all proceeds to support the Penn Program.