Thursday, Jan. 14: 'Birth of a Nation'
at Flying Monkey in honor of MLK Day 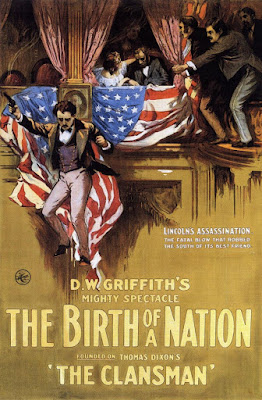 An original poster for 'The Birth of a Nation' (1915), showing the assassination of Abraham Lincoln.

Our first screening of 2016 promises to be a doozey.

This has been controversial, as 'Birth' is a tarnished masterpiece.

Yes, it was a ground-breaking feature film that showed the potential of cinema as an art form.

At the same time, it's an appallingly racist film that glorifies the rise of the Ku Klux Klan.

But this is why I think showing the film is a fitting way to commemorate the work of Dr. King and all who have fought racism in this nation and everywhere.

What better way to honor the efforts of those who have fought for equality than to bear witness to what they were up against?

Isn't it worthwhile to see first-hand how pervasive racism was at one time in this country?

Doesn't it help us appreciate how far we've come, but also put some perspective on how difficult it may be to maintain this progress?

Isn't it worth seeing what was once reality, if only as a way of understanding what we should never allow to happen again?

“...the film represents how racist a white American could be in 1915 without realizing he was racist at all. That is worth knowing. Blacks already knew that, had known it for a long time, witnessed it painfully again every day, but "The Birth of a Nation" demonstrated it in clear view, and the importance of the film includes the clarity of its demonstration. That it is a mirror of its time is, sadly, one of its values.”

I want to thank Alex Ray, owner of the Flying Monkey, for supporting this screening and embracing the spirit in which it's being run.

And me, I'm glad to address any concerns or questions. Although I'm currently traveling, I do have access to e-mail and can be reached at jeffrapsis@gmail.com.

For now, here's the press release with more info about the film and the screening. 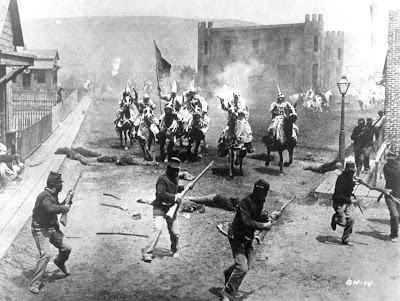 ‘The Birth of a Nation’: Silent film masterpiece or racist artifact?

Controversial movie to be screened with live music on Thursday, Jan. 14 at Flying Monkey in honor of MLK Day

PLYMOUTH, N.H.—What if a movie was acclaimed as a masterpiece, but portrayed the Ku Klux Klan as heroes? What if a movie aimed to show the realities of life during the Civil War, and yet used white actors playing roles in blackface? What does it say if a movie was clearly racist, depicting blacks as an inferior sub-species to whites, but was still a box office smash?

Those are among the questions posed by ‘The Birth of a Nation’ (1915), the ground-breaking epic film from director D.W. Griffith, which continues to inspire controversy a full century after its initial release.

In honor of the film's 100th anniversary, as well as the 150th anniversary of the end of the Civil War, a restored print of the film will be screened in January to honor Martin Luther King Jr. Day at the Flying Monkey Moviehouse and Performance Center, 39 South Main St., Plymouth, N.H. The screening, part of the Flying Monkey’s monthly silent film series, will include live music and take place on Thursday, Jan. 14 at 6:30 p.m.

Admission is $10 per person. The program will be accompanied live by silent film musician Jeff Rapsis.

Rapsis, who programs the Flying Monkey's silent film series, specifically chose the occasion of Martin Luther King Day to screen ‘The Birth of a Nation,’ long regarded as a masterpiece of early cinema but tarnished by racism and prejudice.

“Although ‘The Birth of a Nation’ has been reviled for its blatant and pervasive racism, it had a major impact when it was released and stands as one of the landmarks of early cinema,” said Rapsis, who will perform a live score for the movie.

“Screening this compromised classic to honor Martin Luther King Jr. Day is a chance for today’s audiences to consider first-hand evidence of the obstacles to race equality that existed a century ago, to think about what progress has been made, and to also ponder how many of the prejudices on display in this film that we may still harbor, even unconsciously,” Rapsis said.

As the first-ever Hollywood blockbuster, ‘The Birth of a Nation’ thrilled audiences in 1915 with its large-scale wartime action sequences, its recreation of the assassination of Abraham Lincoln, and spectacular photography by cameraman G.W. "Billy" Bitzer.

Even at the time of its release, the movie was regarded as monumentally insensitive to issues of race, depicting blacks as a sub-race inferior to whites and portraying Ku Klux Klan members as heroes. Conceived by Griffith, a native Southerner, as a saga of two families caught up in the Civil War and its aftermath, many viewers and critics regarded the film as a prolonged statement of cinematic bigotry. 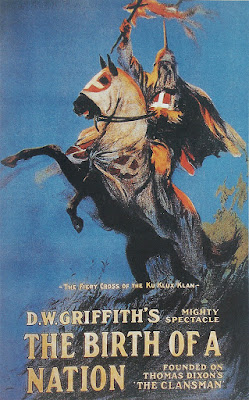 A poster for 'The Birth of a Nation.'

Seen today, the film abounds with offensive racial comments and imagery both overt and implied. To further complicate matters for contemporary audiences, Griffith had all leading roles of black characters played by white actors in blackface; black actors were kept in the background or used only for crowd scenes, which lends the film a surreal quality to modern viewers.

Among the white actors in blackface who played prominent roles is New Hampshire native Walter Long, a popular character actor in Hollywood's early years. Records are unclear about his hometown: Long was born in either Milford or Nashua in 1879.

Despite the racism, the film’s innovative and powerful story-telling techniques, as well as its massive scale, opened Hollywood’s eyes to the full potential of cinema as an art form, exerting a powerful influence on generations of filmmakers to come.

The controversy continues today, with ‘Birth of a Nation’ inspiring passions a century after its release.

Has enough time passed for today’s audiences to regard this landmark film as an artifact of its time, or an indication of enduring prejudice? This Martin Luther King Jr. Day, decide for yourself how far we’ve come with a screening of a restored print of this tarnished American classic the way it was intended to be seen: on the big screen, with live music, and with an audience. 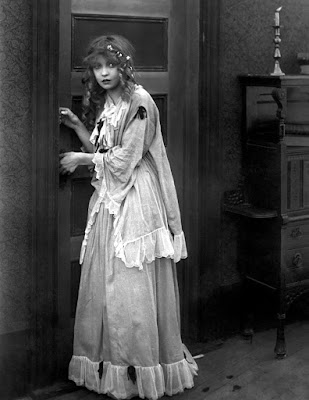 The film stars Lillian Gish, Mae Marsh, Henry Walthall, and dozens of other silent-era performers. Gish, who died in 1993 at age 99, continued to act in films as late as 1987, when she appeared in ‘The Whales of August.’ Her later work includes an appearance on the TV series ‘The Love Boat’ in 1981.

All movies in Flying Monkey's silent film series were popular when first released, but are rarely screened today in a way that allows them to be seen at their best. They were not made to be shown on television; to revive them, organizers aim to show the films as they were intended—in top quality restored prints, on a large screen, with live music, and with an audience.

‘The Birth of a Nation’ will be shown on Thursday, Jan. 14, at 6:30 p.m. at the Flying Monkey Moviehouse and Performance Center, 39 South Main St., Plymouth, N.H. Admission is $10 per person. For more info, call the box office at 603-536-2551 or visit www.flyingmonkeynh.com. For more info on the music, visit www.jeffrapsis.com.

“If one can put the racial overtones aside, this is quuote probably the most accurate celluloid representation of Civil War times to exist. It was made only 50 years after the Civil War ended, when many people who had actually been through the war were still alive to give first hand accounts.”
—Robert K. Klepper, ‘Silent Films,’ (1999)

“More than a hugely successful spectacle, it was a masterpiece—using Griffith’s trademark cinematic techniques and combining emotional intensity and epic sweep—but it was a deeply tainted one. Its racism—consciously intended by the filmmaker or not—makes parts of ‘Birth’ extremely difficult to watch today.”
—Peter Kobel, ‘Silent Movies,’ (2007)