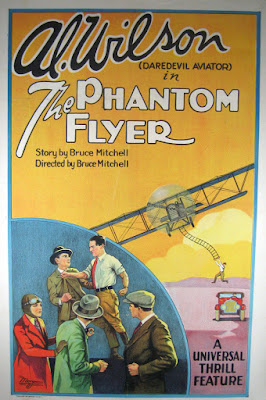 For me, one of the greatest pleasures in exploring the silent film era is discovering movies that are totally forgotten, have little or no artistic merit, but which still hold an audience like nobody's business.

Time and time again, I'm astonished at how some low-rent picture can spring to life when shown in front of a group of people with live music. It's like long ago filmmakers are reaching across the decades to show they still have the stuff.

If that sounds like your idea of a good time, then I encourage you to attend a program on Friday, March 24 at the Aviation Museum of New Hampshire.

That night, I'm accompanying a double-feature of two aviation melodramas—films you've never heard of, but which are packed with the thrills, spills, and chills of early airplane derring-do.

See, I was right—you'd never heard of either of them. But what an experience awaits for those who can come to enjoy this cinematic time capsule!

Both pictures were made to capitalize on interest in the new field of aviation, so they're filled with vintage aircraft, airports, and so on.

But they're also built on refreshingly simple stories where people are either all good or all bad, and so letting yourself get swept up in something so grounded (odd for aviation dramas) can be kind of cathartic.

Also, we all like the satisfaction of seeing the good guys (and gals) win, and for the baddies to get punished.

So hope you can join us for what promises to be a fun program. As a bonus, the museum is on the grounds of Manchester-Boston Regional Airport, and we'll be watching the films mere yards from an active runway!

Start time is 7 p.m. More info in the press release below. See you there!

The "Dare-Devil Aviation Double Feature" takes off on Friday, March 24 at 7 p.m. in the exhibit space of the Aviation Museum of N.H. at 27 Navigator Road, Londonderry. A cash bar reception will open at 6 p.m.

Tickets are $15 for museum members, and $20 for non-members. Tickets may be purchased online at www.aviationmuseumofnh.org.

In 'The Phantom Flyer' (1928) famous stunt flyer Al Wilson portrays a border patrol aviator who must use his pilot skills to save girlfriend Mary (Lillian Gilmore) from cattle rustlers.

And in 'The Sky Rider' (1928), join Champion the Wonder Dog as he flies along with his master Dick to foil the plot of a disinherited nephew to get even with—well, it's complicated!

Come see for yourself as the Museum recreates the silent film experience (planes included) that caused people to first fall in love with the movies: the big screen, live music, and an audience to get riled up about it all.

And all this in a hanger-like space right alongside Runway 17-35 at Manchester-Boston Regional Airport.

The event is sponsored by Hearthside Realty in Manchester.

"We had such a good response to our screening of the classic silent film 'Wings' last November that we wanted to do a follow-up program to screen more early aviation dramas," said Jessica Pappathan, the museum's executive director.

Rapsis, a composer who specializes in film music, will create scores for the two movies on the spot, improvising the music as the movie unfolds to enhance the on-screen action as well as respond to audience reactions.

Rapsis performs the music on a digital synthesizer, which is capable of producing a wide range of theatre organ and orchestral textures.