This Thursday: Gloria Swanson in a silent film
that accidentally created a new art form 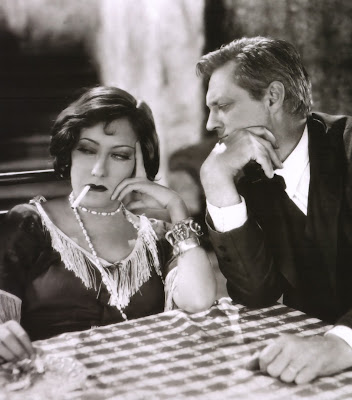 Gloria and Lionel warming up for their big battle in 'Sadie Thompson.'

Up next: Gloria Swanson and Lionel Barrymore in 'Sadie Thompson' (1928), an intense drama made in Hollywood's final burst of silent film production.

It's screening on Thursday, March 16 at 6:30 p.m. at the Flying Monkey Moviehouse and Performance Center, 39 South Main St., Plymouth, N.H.

There's a lot to like about this movie, which many feel contains Swanson's best performance. It may be.

But structurally, there's something very special about 'Sadie Thompson,' the story of which was adapted from Somerset Maughan's story 'Rain.'

What's special? Nothing that the people who made it intended to happen, but it's this: we're missing the last reel!

And so, by accident, we have a situation that leads to an experience very different from what the filmmakers had in mind.

It would be great to have the footage, of course, and see what really happens when the battle between Gloria's fallen woman and Barrymore's tempted preacher reaches a boiling point.

But we don't. And unless the last reel is ever found, we can't.

Instead, we have what often happens when a vintage film exists with missing sequences. Stills and other materials are substituted, and the story is told through narrative titles and other techniques such as pan-and-scan of stills.

With about 70 percent of silent film missing, this happens more often than you might think. Among big films that I've accompanied that are missing entire reels are Raymond Griffith's 'Paths to Paradise' (1925); King Vidor's 'Bardelys the Magnificent' (1926), and Clara Bow's 'Get Your Man' (1927).

And you know what? In each case, I've found that such efforts to fill in missing film with other materials creates a kind of hybrid art form that can actually be quite effective in its own way.

Mainly, I think, because it leaves scenes to the imagination, which engages an audience in a completely different way that if everything's right there on the screen.

In pondering this, I've come to think this is not unlike what happens with other art from the past when things go missing. 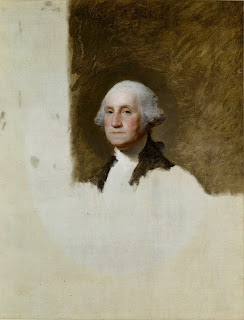 And much of my public school education took place under the watchful eye of George Washington as depicted in Gilbert Stuart's famous unfinished painting.

Some critics feel such losses can actually enhance the stature of the work of art in question.

How? Because we don't know what the arms on the Venus de Milo look like, we're free to idealize them to a state of perfection—one that goes way beyond what any artist could actually achieve.

And that's because the absence allows us each to fill in our own personal visions of perfection. Such notions that are unique to us, and are thus uniquely gratifying or satisfying. 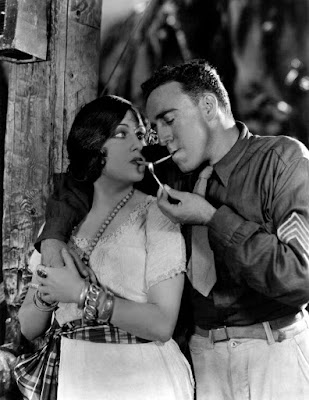 Which brings us to 'Sadie Thompson.' Just as the battle between Gloria Swanson and Lionel Barrymore is about to reach its climax, the film stops!

And what starts up is a recreation of the final reel through stills, titles, and footage from a later remake.

To me, every time I've seen 'Sadie Thompson,' this feels exactly right. The animosity of the two characters grows so intense, the movie just can't contain it. It's like things are so hot, the film melts, or the story triggers infinity, or something.

And so we're left to visualize the climax on own, and because we all do that in our own individual ways, it has the potential to more terrifying and awesome than anything director Raoul Walsh could have put on celluloid.

So it's a motion picture, yes. But it's also something different. By virtue of its missing final reel, it's a hybrid—a new way of telling stories, really. Or at least a different way of rendering a film's climax.