Weekend update: Buster Keaton in a church,
then Lon Chaney's 'Phantom' in a Grange Hall 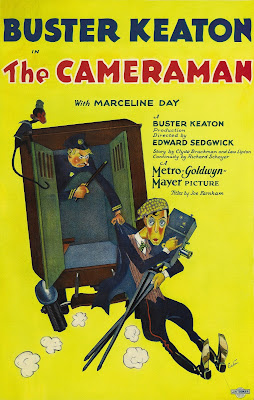 After a month that took me to such far-flung venues as the Kennington Bioscope in London, the Orpheum Theatre in Sioux City, Iowa, and the Cleveland Museum of Art, it's back to silent film accompaniment reality.

Consider: the locations for this weekend's screenings are a church in suburban Boston, and then a Grange Hall in rural New Hampshire.

But that's where most of my screenings happen—at places no more than a few hours from home base.

And that pattern resumes this weekend with a Buster Keaton program tonight (Friday, March 17) at the Trinitarian Congregational Church in Concord, Mass., and then Lon Chaney in 'The Phantom of the Opera' (1925) on Saturday night at the Blazing Star Grange Hall in Danbury, N.H.

Complete info on each show is on the Upcoming Screenings page (link at right), or in the summaries below:

• Friday, March 17, 2017, 7 p.m.: "Sherlock Jr." (1924) and "The Cameraman" (1928) starring Buster Keaton; Trinitarian Congregational Church, 54 Walden St., Concord Center, Mass.
978-369-4837. Tonight's program features Buster Keaton in a pair of his great starring films, both centering on the subject of movies themselves. In 'Sherlock Jr.,' Buster breeches the fourth wall big-time as a movie projectionist who dreams himself into a crime thriller In 'The Cameraman,' to impress the girl of his dreams, mild-mannered portrait photographer Buster takes up the glamorous profession of newsreel cameraman. One of the best comedies of the silent era. The film program is open to the public; $5 per person admission. 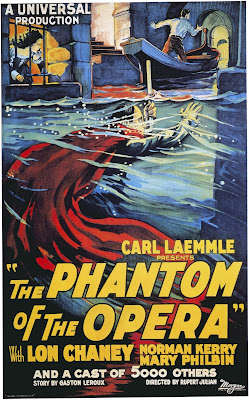 Halloween in March: 'The Phantom of the Opera' (1925) screens on Saturday night in Danbury, N.H.

• Saturday, March 18, 2017, 7 p.m.: Silent Film Program: Halloween in March! at the Blazing Star Grange Hall, North Road in Danbury, N.H. You've heard of "Christmas in July?" Well, welcome to "Halloween in March," a program of spooky silent film with live music presented by the local Grange chapter. Rumor has it the main attraction will be Lon Chaney in 'Phantom of the Opera' (1925), but check back for details. Free and open to the public; suggested donation of $5 at the door.

I've been doing local programs such as these for almost 10 years now. Why?

For one thing, I've found the only way I could really learn how to do silent film accompaniment was to really do it.

And that means for real, in real time, and in front of an audience.

No bathroom breaks, no trips to the fridge, no letting dogs in or out, no breaking concentration, all of which seem to happen when you're doing it on your own at home.

Also, I've found that challenging myself to create so much music under these conditions has enabled me, bit by bit, to work out a kind of musical language that I can call my own.

That's huge, because it's given me a vocabulary to begin putting music together that I feel reflects my—well, whatever it is I have to offer.

The results of this process are beginning to show up in written-out pieces such as the 'Kilimanjaro Suite' that the New Hampshire Philharmonic recently played.

More projects are in the works. So it's a very exciting time for me—as long as I can find time to get done all I hope to do.

But none of it would be happening, I'm sure, if I hadn't sat down and accompanied literally hundreds of silent films in the past 10 years or so.

And the process, such as it is, continues this weekend. Hope to see you, either at the church or at the Grange Hall. Or both!