Accompanying 'Chicago' on Sunday, June 10: music ON screen and off, and all that jazz... 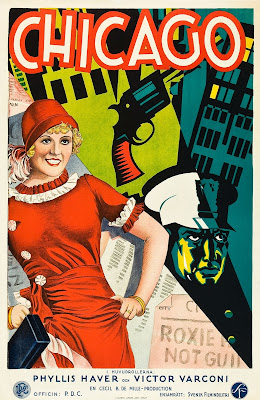 It's one of the many cases where people's response is, "There's a silent film version of that?"

The answer is yes, there is a silent film version of 'Chicago' (1927), originally a stage play and later a hit Broadway musical and then a movie musical that won 'Best Picture' in 2002.

And I'll be doing music for a screening of it tomorrow (Sunday, June 10) at 2 p.m. as the latest installment of the "Silents, Please!" series at the Somerville Theatre, Davis Square, Somerville, Mass.

Details about the film and the screening are in the press release at the bottom of this post.

For now, let me point out that in addition to being one of those silent films that people are surprised to hear exists, 'Chicago' is also one of those pictures that's tricky for an accompanist because of the key role that music plays on-screen during the film.

The most notable example (and I'm being vague here so as not to spoil it for anyone) is the player piano in an apartment. Something really terrible happens in that apartment, and when it does, the camera cuts to...the player piano, grinding along as if nothing happened.

It's a powerful visual device. But if the accompanist isn't ready, it won't have the intended impact. So a little preparation is in order to bring the effect to life, I think.

It's especially important for the way I operate, as I generally shy away from the "rinky-tink piano" sound that so many people associate with early cinema.

But in the case of 'Chicago,' it's exactly what's called for, I think, for the scene to work: while big stuff happens off-screen, the piano grinds along mechanically and mindlessly.

Will it all come off successfully? Attend tomorrow's screening and we'll all find out together.

The presentation, by the way, will not be via 35mm print as the Somerville's big "House 1" is currently showing a 70mm print of '2001,' and so we've been bumped to a smaller house.

They CAN run 35mm in our substitute house, but only via platter, so that rules out archival 35mm prints.

So, for this one screening only, we'll be making use of a recently produced DCP version of 'Chicago.'

I understand the value of showing 35mm prints whenever possible, and I support and admire the Somerville's commitment to that practice.

However, in the case of silents, really good prints—prints that show the films off to their best advantage—are often very hard to come by.

So I'm very much looking forward to seeing this restoration of 'Chicago,' as it should look great, and we'd probably not be able to program the title otherwise. 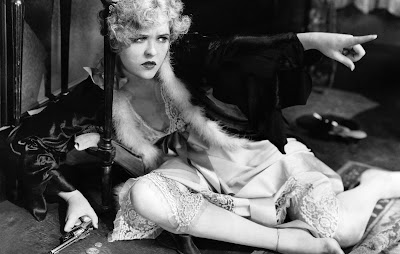 Phyllis Haver co-stars with a gun in 'Chicago' (1927), the silent film version of the well-known tale.

Popular jazz-age melodrama, long thought lost but then rediscovered, to be shown on the big screen with live music

SOMERVILLE, Mass.—Long before it became a long-running Broadway musical and then 2002's Best Picture, the story of 'Chicago' first achieved worldwide fame as hit silent film.

See for yourself when the original 1927 screen version of 'Chicago' is screened at the Somerville Theatre on Sunday, June 10 at 2 p.m.

The program, the latest in the Somerville's 'Silents, Please!' series, will be accompanied by live music performed by silent film composer Jeff Rapsis. Admission is $15 per person, $12 students/seniors.

The film will be presented in DCP format. 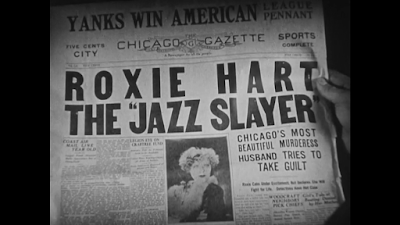 The silent film version of 'Chicago,' based on a hit 1926 stage play, was for many years thought to be one of the many silent films that were completely lost, with no copies surviving in any archive.

But in 2006, a pristine original print of the film was discovered in the archives of iconic director Cecil B. DeMille, who supervised its production.

In reviewing the film, critic Jamie S. Rich of www.dvdtalk.com called it a "melodrama that remains fun to watch even 80 years later. It's more than a historical curio or an antiquated prototype for its more famous descendant; DeMille's production is stylishly ambitious and smartly constructed. This loose-limbed crime story is evidence of just how assured cinema had become prior to the advent of sound."

In reviving the original 'Chicago,' the Somerville Theatre aims to show silent movies as they were meant to be seen—in high quality prints, on a large screen, with live music, and with an audience.

Upcoming programs in the Somerville's silent film series include:

• Sunday, July 8: 'The Docks of New York' (1928). Masterful drama about a ship laborer who rescues a beautiful woman from drowning, but then finds his life changed in unexpected ways. A gem from the late silent years. Shown via 35mm print.