Harry Houdini adventure film this weekend; plus notes on promotion and the weather 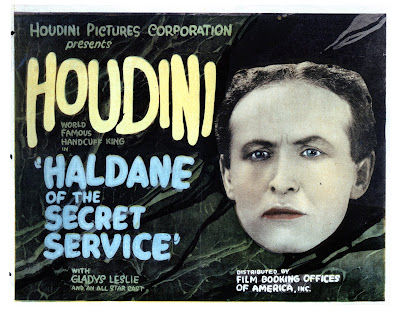 Houdini stars in 'Haldane of the Service Service' (1923), showing Sunday, June 24 at the Town Hall Theatre in Wilton, N.H.

Next up: a Harry Houdini film I've never accompanied before.

More details in the press release below, but it's supposed to be Harry's best (and best-preserved) full-length adventure. Looking forward to it!

For now: pleasantly surprised by fairly strong turnouts for silent film events this past weekend.

On Saturday night, about 50 people enjoyed a double feature of Buster Keaton's 'Sherlock Jr.' (1924) and 'The Cameraman' (1928) in the basement of the First Congregational Church in Nashua, N.H.

And on Sunday afternoon, about an equal number were on hand (despite beautiful weather) for Buster's 'College' (1927) at the Center for the Arts in Natick, Mass.

Usually good weather means low turnout, especially this time of year. But not this time!

Both shows were highlighted by strong audience reaction. Lots of big laughs!

Why the good turnout? I think a key reason is that both venues extensively promoted the screenings to their respective bases, and actively encouraged people to attend. 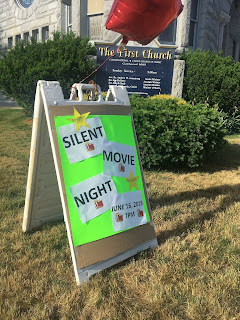 At the First Church, committee members apparently got out the word in a big way. The screening even won a mention in the church bulletin, and promotion on the day of show included sandwich boards on the front lawn.

And in Natick, they took vintage original posters for 'College' and reworked them into wonderfully handsome promotional pieces for the screening, which is part of a series they're trying to build.

It seems to be working. Our first two screenings drew just a handful of folks. But word-of-mouth, coupled with the promotional efforts (and Buster Keaton, too) helped swell attendance. 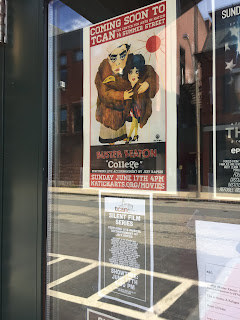 From the point of view of an accompanist, I always try to give it everything I've got when the lights go down, regardless of audience size.

But I have to say, it really makes a difference when a room is packed, or even half full, compared to having a lot of empty seats.

We're supposed to get showers—so the weather's in our favor, if the forecast holds. 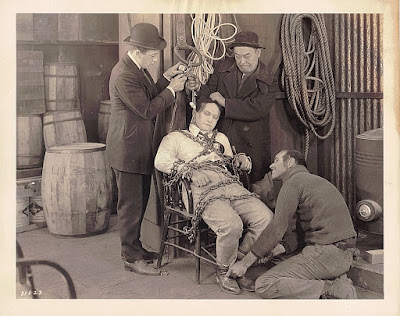 Houdini tied up again in 'Haldane of the Secret Service' (1923).

Rare Houdini film 'Haldane of the the Secret Service' at Town Hall Theatre on Sunday, June 24

WILTON, N.H.—He reigned for decades as the legendary "Handcuff King," famous for daring and impossible escapes staged around the world.

But Harry Houdini also had a brief movie career, starring in a series of silent adventure films that showed off his athletic prowess and his talent for illusion, stunts, and escape.

See Houdini back on the big screen in 'Haldane of the Secret Service' (1923), one of his few surviving feature films.

Admission is free, with a suggested donation of $5 per person to defray expenses.

The rarely screened film will be shown with live musical accompaniment by Jeff Rapsis, a New Hampshire-based performer regarded as one of the nation's leading silent film musicians.

But enough escaped oblivion to provide a glimpse of the world-renowned escape artist at the peak of his worldwide fame.

In 'Haldane of the Secret Service,' U.S. Government agent Heath Haldane is determined to bring to justice the mysterious Dr. Yu, all-powerful head of the Chinese underworld

Dr. Yu is suspected of international counterfeiting, narcotics smuggling and the murder of Haldane's father.

Haldane soon encounters the beautiful Adele Ormsby, whose family might be connected to Yu's criminal activities.

The pursuit of justice then takes the story from New York to Scotland, London, and Paris.

Time and again, the bad guys trap Haldane in ropes, chains and strongboxes. Each time, our hero wriggles out of his predicaments with the skill of—well, Harry Houdini.

He first attracted notice in vaudeville in the U.S. and then as "Harry Handcuff Houdini" on a tour of Europe, where he challenged police forces to keep him locked up.

Soon he extended his repertoire to include chains, ropes slung from skyscrapers, straitjackets under water, and having to escape from and hold his breath inside a sealed milk can with water in it.

In 1904, thousands watched as he tried to escape from special handcuffs commissioned by London's Daily Mirror, keeping them in suspense for an hour.

Another stunt saw him buried alive and only just able to claw himself to the surface, emerging in a state of near-breakdown.

In 1913, Houdini introduced the Chinese Water Torture Cell, in which he was suspended upside-down in a locked glass-and-steel cabinet full to overflowing with water, holding his breath for more than three minutes. He would go on performing this escape for the rest of his life.

Houdini died prematurely in 1926, at age 52, of peritonitis following a burst appendix that may have been caused by blows received to the abdomen by a visitor backstage at a performance in Montreal.

Following his death, Houdini's reputation as a legendary performer continued to make his name a household world in the decades that followed.

Although not well known as a film actor, Houdini's work in motion pictures was not forgotten. In a posthumous ceremony on Oct. 31, 1975, Houdini was given a star on the Hollywood Walk of Fame at 7001 Hollywood Blvd.

Houdini is one of several "big name" performers featured on this year's silent film schedule at the Town Hall Theatre.

Harry Houdini in 'Haldane of the Secret Service' (1923) will be shown with live music on Sunday, June 24 at 4:30 p.m. at the Town Hall Theatre, 40 Main St., Wilton, N.H. Admission is free, with a suggested donation of $5 person to defray expenses.

For more information, visit www.wiltontownhalltheatre.com.
Posted by Jeff Rapsis at 10:38 AM