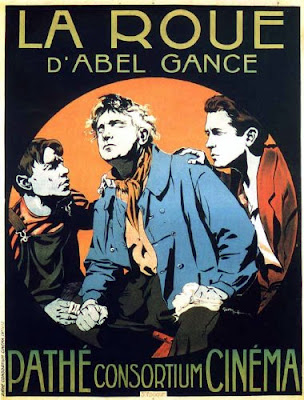 An original poster for 'La Roue' (1923) directed by Abel Gance, showing in two parts this weekend at the Wilton (N.H.) Town Hall Theatre.

Once in awhile, it's good to stretch yourself.

That's what I'll do this weekend in creating music for 'La Roue' (1923), a drama from French director Abel Gance.

It's 4½ hours long, so we'll show it in two parts over two days: Saturday, April 27 and Sunday, April 28 at the Town Hall Theatre in Wilton, N.H.

Showtime for both days is 4:30 p.m. Free admission, with a suggestion donation of $5 per person for each screening to support the Town Hall Theatre's silent film series.

Plenty more info is in the press release attached below. But a few last-minute thoughts:

For the music, I've developed some basic material that I'll use in scoring the 'La Roue,' which is French for 'The Wheel,' as in the wheel of life.

But how will it come together? I really don't know until the lights go down and 'La Roue' starts rolling.

However, the span of 4½ hours gives an accompanist an enormous canvas with which to work. And it's not only length, but the pace and style of the film that contributes to this sense of possibility.

As a drama, it's not so dependent on split-second timing as comedy. Instead, the music can grow more naturally out of the emotions as they develop on screen.

In short, you can really get into it. So I'm looking forward to losing myself in the world of this family that Gance brought to the screen nearly a century ago. As I said, stretching myself. 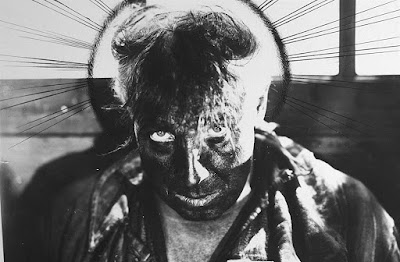 Speaking of which...I'm also excited just by the idea of this film being shown as intended: on the big screen, with live music, and with an audience.

It's a very rare chance to experience a work of art that otherwise doesn't exist, at least as its creator envisioned.

That's true of all cinema, I suppose. But just as an art museum often can display only a fraction of its collection to the public, this is a rare chance for this ambitious Gance masterwork of early cinema to be taken out of the archive and be experienced again, even if only for a day. (Or, actually, two.)

I encourage you to see it this way, as a rare opportunity to view something, rather like a solar eclipse.

And thus take advantage of what seems to be a rainy weekend in our part of the world to spend a little quality (and quantity) time with Abel Gance at the Town Hall Theatre. 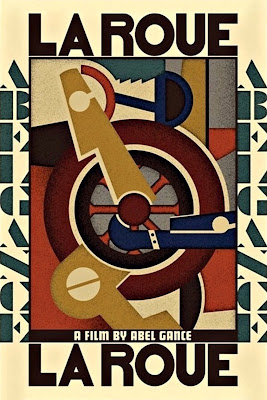 A critically acclaimed French silent drama that runs nearly 4½ hours long will be shown in two parts at the Town Hall Theatre over the weekend of Saturday, April 27 and Sunday, April 28.

'La Roue' (French for 'The Wheel'), a sprawling family drama about a railroad engineer and his children, will be screened with live music by silent film accompanist Jeff Rapsis.

Admission is free; a donation of $5 per person at each screening is suggested to help defray expenses.

"This is a rare chance to see one of the most influential films of early cinema on the big screen, and with live music, as it was intended to be shown," said Rapsis, who provides music for the Town Hall Theatre's monthly silent film series.

'La Roue' was directed by visionary French filmmaker Abel Gance. Released in 1923, it set the stage for Gance's later 'Napoleon' in its use of innovative cinematic devices, particularly rapid cutting.

Sisif adopts the girl, knowing only that her name is Norma, and raises her with his son.

This sets in motion a family drama that unfolds over the ensuing decades, leading to tragedy in far-flung locations. 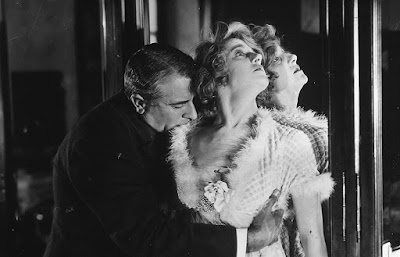 The current version of 'La Roue' is a partial reconstruction of the original 1923 release, which ran an astonishing nine hours and which Gance intended to be shown over three days.

Gance later cut the film to two hours so it could fit into one evening, with much of the original version lost in the process.

In 2008, restorers gathered material from 'La Roue' from archives worldwide and pieced together the 4½-hour version being shown at the Town Hall Theatre.

"Early filmmakers such as Abel Gance or Germany's Fritz Lang would push the limits of the medium with tremendously ambitious projects," Rapsis said.

"So once in awhile, it's worth putting these pictures back on the big screen as they were intended to be shown, just as it's worth going to Paris to see the real Mona Lisa instead of just looking at a picture in an art book."

"Last year at the Town Hall Theatre, we ran Fritz Lang's massive two-part silent film version of 'The Nibelungen' mythic tales," Rapsis said. "Reaction was strong enough for us to try another two-day event this season." 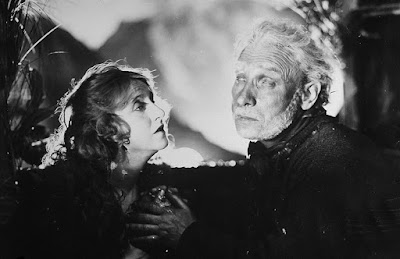 In 2008, David Kehr of the N.Y. Times wrote that 'La Roue' "...still fascinates as a grab bag of experimental techniques...which clearly dazzled audiences of the time with the formal possibilities of this still relatively new medium. Circular forms, drawn from the title image, appear with maddening regularity: in the charging wheels of Sisif’s locomotive, the faces of ominously ticking clocks, the ring dance of a band of happy peasants."

Jason Sandors of Fandor.com described 'La Roue' as an "epic romance of forbidden love and doom, shot with no expense spared amidst the chaotic railways of Nice and the high-elevation peaks of Mont Blanc. One of the most influential films of the silent era, its editing style of rapid, rhythmic cuts had never been seen before. 'La Roue' heralded an entirely new approach to filmmaking that inspired Sergei Eisenstein and Alexander Dovzhenko (among many others)."

For the music, Rapsis has created new material that he will use to improvise the score live for both screenings.

Admission is free; a donation of $5 per person at each screening is suggested to help defray expenses. For more info, visit www.wiltontownhalltheatre.com or call (603) 654-3456.
Jeff R.