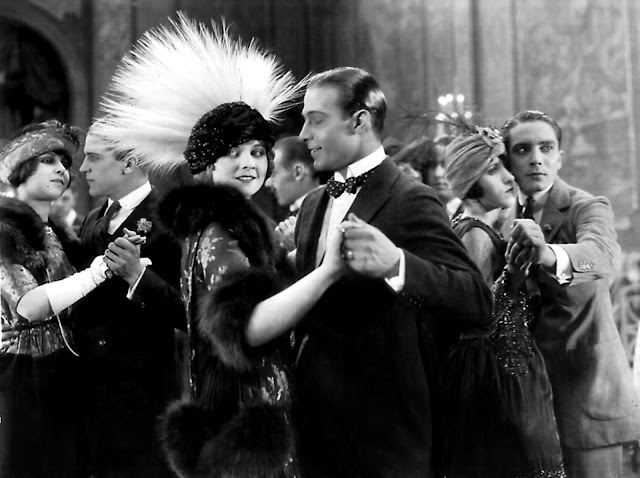 Rudolph Valentino introduces the Tango in 'Four Horsemen of the Apocalypse.'

Final screening of the year is Sunday afternoon at the Town Hall Theatre at Wilton, N.H., and it's a doozy.

'Four Horsemen of the Apocalypse' (1921) is one of my favorite silent dramas, and I'm not alone: it was the sixth-highest grossing picture of the era.

To me, it's one of the first mainstream Hollywood pictures to make full use of the visual and imaginative powers of cinema, which were still being discovered.

D.W. Griffith and other first-generation directors knew how to tell stories, which was often the main strength of their work.

But Rex Ingram, who helmed 'Four Horsemen,' and his collaborators were able to take it a step further by weaving visual allegory into their drama in a way that only movies could.

The Four Horsemen of the title aren't just abstract metaphors or symbols. In Ingram's realization of the tale, we get to see them on screen, brought to life before our eyes as they come to life in some kind of steamy underworld, and then ride together through the skies.

And with a giant fire-breathing dragon to boot!

None of this is part of the reality of War I in France, which the movie depicts with documentary realism. But the Four Horsemen are still seamlessly woven into the fabric of the tale, giving the narrative a visual impact that's part of the power of cinema, I think.

Come see for yourself! On top of everything else, 'Four Horsemen' also has Rudolph Valentino introducing the tango, launching a craze that endures to this very day.

Here's the press release with more info about the film and our screening: 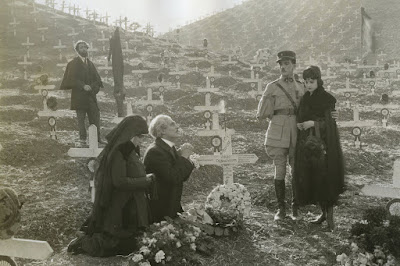 Rudolph Valentino in 'Four Horsemen of the Apocalypse' on Sunday, Dec. 29 at Town Hall Theatre

WILTON, N.H.—An epic drama that launched the career of silent film heartthrob and megastar Rudolph Valentino will be shown this month at the Town Hall Theatre.

'The Four Horsemen of the Apocalypse' (1921), a multi-generational family saga that climaxes during World War I, will be screened with live music on Sunday, Dec. 29 at 4:30 p.m. at the Wilton Town Hall Theatre, 40 Main St., Wilton, N.H.

The screening is free and open to the public; a donation of $5 per person is requested to defray expenses.

Based on a novel by Spanish author Vicente Blasco Ibañez, 'Four Horsemen of the Apocalypse' tells the story of an extended Argentine family with mixed ethnic background: one side is German, while the other is French.

The family get drawn into World War I in far-off Europe, with members ending up on opposing sides. With brothers pitted against one another on the battlefield, the destruction of war changes lives forever.

Also, the film turned then-little-known actor Rudolph Valentino into a superstar, associating him with the image of the Latin Lover. In addition, the film inspired a tango craze and fashion fads such as gaucho pants.

Directed by Rex Ingram for Metro Pictures (an ancestor of MGM studios), 'Four Horsemen' grew into a mammoth production: over $1 million was spent in making it and more than 12,000 people were involved. The film was hugely successful at the box office, grossing nearly $5 million during its initial run, an enormous sum at the time.

The film was notable as one of the first major Hollywood productions to include World War I (then known as the 'Great War') in its storyline, and also in that it did not glorify the recent conflict or look past the tragedy that it brought. It's also among the first U.S. feature films to make full use of the unlimited visual power of the new motion picture medium.

Although Valentino dominates the film, other actors of note are featured. Alice Terry, the billed star as well as Ingram's wife, was a popular actress of her day. She would be cast in the next Ingram/Valentino flick rushed out in the same year before Rudy's jump to Paramount, The Conquering Power (1921).

'The Four Horsemen of the Apocalypse' was the brainchild of Metro screenwriter June Mathis, who went on to become one of the most powerful woman in early Hollywood, helping Valentino manage his career until his untimely death of peritonitis at age 31 in 1926.

The film was remade as '4 Horsemen of the Apocalypse' in 1962, with the setting changed to World War II.

"Creating the music on the spot is a bit of a high-wire act, but it contributes a level of energy that's crucial to the silent film experience," Rapsis said.

‘The Four Horsemen of the Apocalypse’ (1921) starring Rudolph Valentino will be shown with live music on Sunday, Dec. 29 at 4:30 p.m. at the Town Hall Theatre, 40 Main St., Wilton, N.H. Admission is free; a donation of $5 per person is suggested to defray expenses. For more info, call (603) 654-3456 or visit www.wiltontownhalltheatre.com.