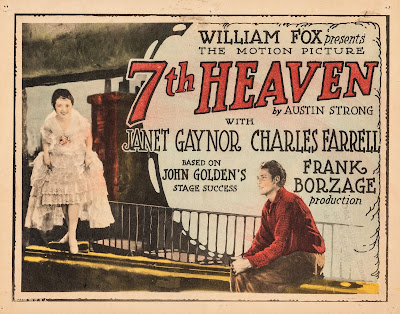 Coming up next: a Valentine's Day screening of '7th Heaven' (1927), the romantic drama that helped Janet Gaynor win 'Best Actress' at the very first Academy Awards.

I've been talking it up by advising audiences to bring an ample supply of tissues. Maybe we can get Kimberly-Clark (makers of Kleenex) to sponsor the event.

But first, a few comments about the 'Kansas Silent Film Festival in New Hampshire' that we're organizing for later this month.

Our pop-up version of this popular festival, to be held 1,500 miles away from its usual location, is mostly my way of coping with the fact that it's not happening this year, at least in its usual format, due to the ongoing pandemic.

Yes, the Kansas Silent Film Festival will take place virtually. And you'll find more details on that when they're posted on their Web site, which is www.kssilentfilmfest.org.

But not being able to go out there, as I have every year for the past 20 years (really!), is something I just couldn't just accept. In February, some people go to Aruba and bask in the sunshine. Me, I go to Kansas, and bask in the friendliness.

But with no Kansas, there was a big hole in my calendar. So if I'm not going out to Kansas, why not bring Kansas here?

And that's what we're doing, with a three-day tribute to this terrific festival running from Friday, Feb. 26 through Sunday, Feb. 28 at the Town Hall Theater in Wilton, N.H.

On the program: six silent feature films (plus some surprises), all with ties to the Sunflower State, which produced a bumper crop of silent era greats: Buster Keaton, Louise Brooks, Fatty Arbuckle, Zasu Pitts, and more!

We're even importing some Kansas delicacies to bring some local flavor to our audiences: specifically, hot pickles from Porubsky's Deli in Topeka. Many thanks to all our friends at the Kansas festival for letting us do this and for helping us out so much! (And for sending the pickles!)

Get all the details by downloading the flier.

Alas, so far most of the response to this has been negative. It's mostly from people who seem to think I'm being irresponsible by holding such an event during a pandemic.

People are entitled to their opinion. But they should understand that in New Hampshire, state health guidelines have allowed theaters to operate (under strict safety protocols) since last July.

At the Town Hall Theatre and a few other venues, we've been running film (with live music) all during this time, with no problem. The theater is limited to 50 percent capacity, and there's plenty of room for social distancing.

New Hampshire does have a 10-day quarantine requirement for visitors from outside the New England region. So I don't expect many out-of-state people to trek to the Granite State for our homegrown tribute.

But people who enjoy vintage film ought to realize that the few theaters willing to run it are in a fight for survival, and that's largely what this is about.

Currently, first-run films are a non-starter for a venue such as the Town Hall Theatre: studios aren't releasing their best stuff, the audiences aren't attending, and the terms for the pictures that are in release don't make economic sense for small theaters.

As Dennis Markaverich, owner/operator of the two-screen Town Hall Theatre for the past 47 years, put it: "It's like shoveling money into the boilers of the Titanic."

So I'm thankful Dennis is open to creative and unusual programming during these dark times (who else would let me run Fritz Lang's five-hour 'Dr. Mabuse, Der Spieler'?), and I'm glad to help him keep the theater open and the concession stand humming until better times return.

So if you're concerned about the pandemic, I understand. Please stay home. But stop dumping on those of us making efforts to keep local theaters from tanking.

Now, about '7th Heaven': it's one of the biggies. You can tell because over the years the San Francisco Silent Film Festival (also one of the biggies) has run it not once but twice. Amazingly, as a young woman Janet Gaynor once worked at the Castro Theater, the festival's long-time home.

To read the thoughtful essays posted by the San Francisco folks, check out their Web site.

And to read the press release I cranked out last week in an attempt to pitch our screening as a great way to celebrate Cupid's big day, look out below!

Hope to see all you romantics at the Town Hall Theatre next Sunday. And don't forget your Kleenex® facial tissues, a Kimberly-Clark brand. 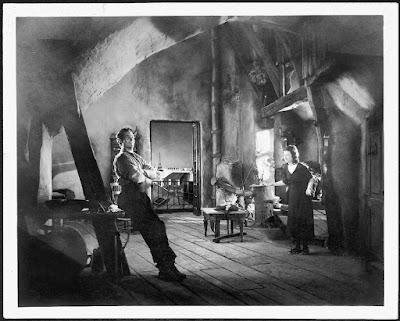 Charles Farrell and Janet Gaynor in their rooftop love nest in '7th Heaven' (1927).

'7th Heaven' (1927), a romantic drama that won actress Janet Gaynor the first-ever 'Best Actress' Academy Award, will be shown with live music on Sunday, Feb. 14 at 2 p.m. at the Town Hall Theatre in Wilton, N.H.

'7th Heaven,' which also netted Frank Borzage the first 'Best Director' Oscar, is a fable set in Paris just before World War I. It's the story of an abused and abandoned young woman (Gaynor) who is cast aside by her family, only to be adopted by an ebullient sewer worker (Charles Farrell) with his sights set on higher things.

In her new home, the girl learns a fresh way of looking at life. Eventually love blossoms—but will it survive the onset of war? Director Borzage used all the techniques of silent film at its height to craft a universal and timeless story that audiences have found moving since the picture's first release in 1927, one year before the talkie revolution.

'7th Heaven' received the most nominations of any film—a total of five—at the first-ever Academy Awards ceremony, held on May 16, 1929 in the waning days of the silent era. 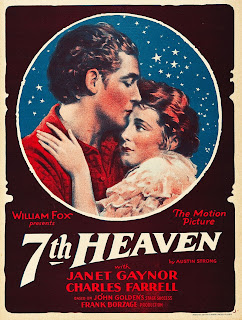 Besides winning 'Best Actress' for Gaynor and 'Best Director' for Borzage, it also won an Oscar for Benjamin Glazer in the 'Best Writing, Adapted Story' category. '7th Heaven' was also nominated for 'Outstanding Picture, Production' (the forerunner of today's 'Best Picture' category) and 'Best Art Direction.'

Gaynor's first-ever 'Best Actress' award was also given in honor of her performances in 'Street Angel' and 'Sunrise' in the same year. She won over competing actresses Gloria Swanson and Louise Dresser.

Live music will be provided by Jeff Rapsis, who improvises scores for silent films using a digital synthesizer to recreate the texture of the full orchestra.

'7th Heaven' was remade in 1937 as a talking picture starring Simone Simon and Jimmy Stewart in the lead roles.

Critics and film buffs regard the original silent version of '7th Heaven' as a high-water mark of silent cinema. "The original '7th Heaven' is still the yardstick for all movie love stories," wrote Joe Franklin in 'Classics of the Silent Screen.'

Reviewer Tim Brayton wrote that '7th Heaven' is "the kind of movie that births a lifelong love affair with silent cinema. ... I'd be extraordinarily hard-pressed to come up with any way in which it's not flawless."

'7th Heaven' will be screened on Sunday, Feb. 14 at 2 p.m. at the Town Hall Theatre, 40 Main St., Wilton, N.H. Free admission; a donation of $10 per person is suggested to support the Town Hall Theatre's silent film series. For more information, visit www.wiltontownhalltheatre.com or call (603) 654-3456.