Thoughts on 'The Freshman': If comedy doesn't have an audience reaction, is it still funny? 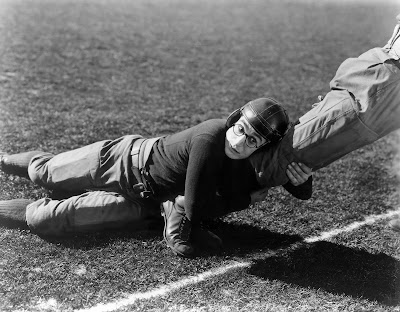 Harold Lloyd hangs on in 'The Freshman' (1925), his college football classic.

One of my best silent film memories dates from 1993, long before I began accompanying them, when we were hosting a visitor from Russia for much of that spring and summer. This was just after the Soviet Union collapsed, which had enabled our friend to travel outside the country for the first time.

At one point, we visited the Big Apple (that's New York City for those of you who don't know your urban fruit), and the Film Forum in Greenwich Village happened to be running a Harold Lloyd retrospective in honor of the comedian's 100th birthday year.

Great! This was at a time when seeing a Lloyd feature in any format was a rare privilege—never mind in a theatre running a 35mm print and with live music.

So we bought tickets to a screening of 'The Freshman' (1925), and promptly entered another dimension. Before it started, Mischa had no idea what to expect. But once the lights went down, with live piano music from longtime Film Forum accompanist Steve Sterner, audience reaction was explosive.

Really! Our Russian friend was bowled over, and so were we. The laughter proved contagious at first, and finally convulsive, as Lloyd topped one gag with another until people around us were literally gasping for breath. Us, too! You could not resist. 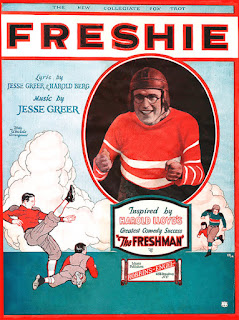 "This would go over great in Russia," Mischa exclaimed, after singing along with another chorus of "Freshie," the tune that Sterner wove throughout the show and then, as I recall, had the audience sing together afterwards.

It was my first experience with a phenomenon I've since come to know well: the "Harold Lloyd Works Best With A Big Audience" principle that's right up there with the laws of thermodynamics. Again, really. In gearing his films for the big audience experience, Lloyd knew what he was doing, both when he made the films and later, when he kept them off television.

To not see 'The Freshman,' or any other Lloyd feature, in a crowded theater, is to not see the film Lloyd made. It would be like trying to view the Mona Lisa at the bottom of a pool. It's just not the same.

Or to paraphrase the old question about a tree falling in the forest and making a noise: if a comedian slips on a banana peel and no one is there to laugh, is it funny?

I don't know the answer to that question. But I do know we're screening 'The Freshman' on Super Bowl Sunday (Feb. 7) at the Town Hall Theatre in lovely downtown Wilton, N.H., which is nowhere near Greenwich Village. Kick-off time (for the film) is 2 p.m., which will get you home in plenty of time for the big game.

So this is where you come in. Don't deprive Harold of the atmosphere he needs to flourish. Make your way to the Town Hall Theatre on Sunday, Feb. 7 for the 'The Freshman,' and you'll see the latest Russian pop culture phenomenon a terrific and timeless football comedy.

This means you! Press release below. See you there! 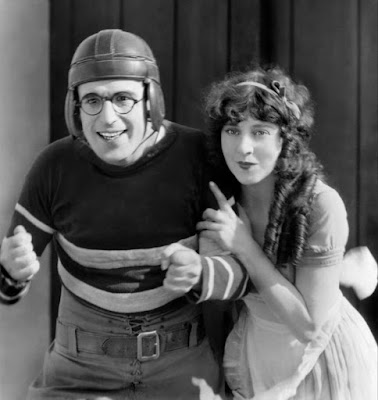 Harold Lloyd and Jobyna Ralston in 'The Freshman.'

WILTON, N.H.—What happens when a first-year student's dreams of college collide with the realities of campus life?

The result is Harold Lloyd's 'The Freshman' (1925), one of the most popular comedies of the silent film era. Filled with classic scenes and a great story, 'The Freshman' endures as one of Lloyd's most crowd-pleasing movies.

Admission is free; a donation of $10 per person is suggested to support the theater's silent film series.

The program will be shown with live music by Jeff Rapsis, a New Hampshire-based silent film accompanist.

The Town Hall Theatre continues to observe procedures to comply with all state and CDC public health guidelines. 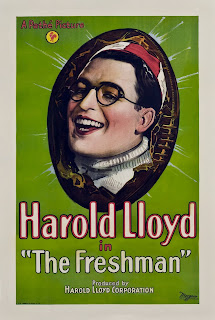 'The Freshman' follows Lloyd from his small town to Tate College, where he hopes to achieve fame as Big Man on Campus. Instead, his quest for popularity becomes a college-wide joke, with Harold getting tricked by upperclassmen into hosting the school's annual "Fall Frolic" at his own expense.

Realizing he's an outcast, Lloyd decides he can make his mark on the college football team, where he holds the lowly position of waterboy and serves as tackling dummy. On the day of the Big Game, can the bespectacled "freshie" somehow save the day and bring gridiron glory to dear old Tate?

'The Freshman,' the most successful film of Lloyd's career, was an enormous box office smash. Its release sparked a craze for college films that lasted well beyond the 1920s, and even a popular hit song, the collegiate fox trot "Freshie."

For football fans, the film's climactic game sequence was shot on the field at the actual Rose Bowl in 1924. The crowd scenes were shot at halftime at California Memorial Stadium during the November 1924 "Big Game" between UC Berkeley and Stanford University. Other exterior scenes were filmed near the USC campus in Los Angeles.
Also, 'The Freshman' will finish well before the kick-off for Super Bowl LV, which starts at 6:30 p.m.

Beyond its comic appeal, 'The Freshman' today has an additional layer of interest in its depiction of college life in the 1920s—a time of raccoon coats, ukeleles, and many other long-gone fads and fashions.

"It was long before television, the Internet, cellphones, or Facebook," said Rapsis. "To us today, it looks like college on another planet, which I think adds to the appeal of a film like 'The Freshman.' But at its core, 'The Freshman' is still a great story about people, and that's why it remains such an entertaining experience today, especially when shown as Lloyd intended it."

In 1990, 'The Freshman' was selected for preservation in the U.S. National Film Registry by the Library of Congress as being "culturally, historically, or aesthetically significant," named in only the second year of voting and one of the first 50 films to receive such an honor. 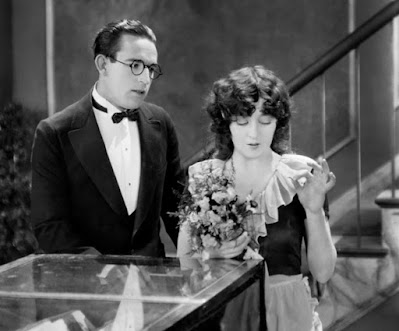 Lloyd, along with Charlie Chaplin and Buster Keaton, is recognized as one of the silent screen's three great clowns. Lloyd's character, a young go-getter ready to struggle to win the day, proved hugely popular in the 1920s. While Chaplin and Keaton were always critical favorites, Lloyd's films reigned as the top-grossing comedies throughout the period.

However, Lloyd's public image faded after his retirement in the 1930s, when he turned his energies to charitable causes such as the Shriners. He retained control over his films, refusing to release them for television and only rarely allowing them to be screened at revivals, fearing modern audiences wouldn't know how to respond to his work or to silent films in general. He died in 1971.

In recent years, Lloyd's family has taken steps to restore Harold's reputation and public image. They've released his work on DVD, and arranged for more frequent screenings of his films in the environment for which they were made: in theaters with live music and a large audience.

Despite the passage of time, audiences continue to respond just as strongly as when the films were new, with features such as 'The Freshman' embraced as timeless achievements from the golden era of silent film comedy.

Head back to school—and the stadium—with Harold Lloyd's 'The Freshman' (1925), to be shown with live music on Super Bowl Sunday, Feb. 7 at 2 p.m. at the Town Hall Theatre, 40 Main St., Wilton, N.H. Admission is free; a donation of $10 per person is suggested to support the theater's silent film series. For more info, visit www.wiltontownhalltheatre.com or call (603) 654-3456.