This Sunday: the exciting finale of 'Officer 444' plus 'Old Ironsides' (1926) at Town Hall Theatre 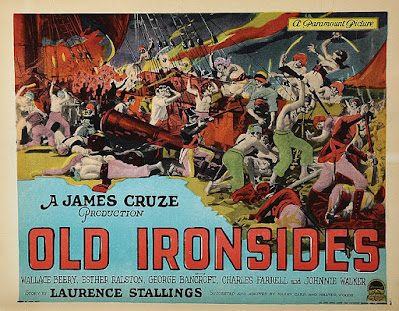 At the Town Hall Theatre in Wilton, N.H., this Sunday marks the end of a journey.

That's because we're running the long-awaited final chapter of 'Officer 444,' a ten-part police adventure serial that we've been screening since January.

And what a long road it's been. Join us as we learn the identity of Officer 444's arch-nemesis, 'The Frog,' and find out how justice will be served. Or something like that.

I have to say: nine chapters into this tale, and it still hasn't made much sense.

But we'll finish it up on Sunday, May 23 as the lead-in to our "pre-Memorial Day weekend" screening of 'Old Ironsides' (1926), a swashbuckling dramatization of the early years of the USS Constitution.

And just doing some math...if the real USS Constitution (still afloat in Charlestown, Mass.) was commissioned in 1797, that means it was 129 years old when this film was released.

And right now, we're 95 years from when 'Old Ironsides' (1926) was released. So it won't be too much longer until we reach the point when this film is closer to the ship's launching than to the present day.

The fun begins at 2 p.m. More info in the press release below. Hope to see you there! 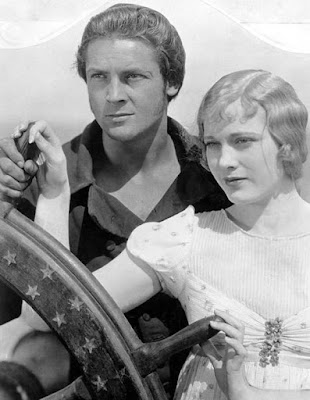 WILTON, N.H.—Relive the early days of the USS Constitution, when the ship was launched by a young nation to battle pirates off Africa's Barbary Coast.

The film tells the story of the early days of the USS Constitution, which today is the world's oldest commissioned naval vessel still afloat. Launched in 1797, she was one of six original frigates authorized by the Naval Act of 1794 and the third constructed.

Nicknamed 'Old Ironsides,' she was originally scheduled to be broken up in 1830, the end of her normal service life. But the ship was saved that year by a poetic tribute published by Oliver Wendell Holmes. The poem supplied the story for 'Old Ironsides' nearly a century later.

Directed by James Cruze, 'Old Ironsides' is an action/adventure film that traces the story of an early USS Constitution crew member.

The crew member, a gunner, is shanghaied while ashore in Boston and forced to serve on another ship, the Esther, a commercial vessel bound for Italy.

Among those on board are a young boy running away from home, and the daughter of the ship's owner.

After crossing the Atlantic, the Esther is attacked by pirates off the coast of Algiers in the south Mediterranean Sea, with the crew and passengers taken captive.

Will the USS Constitution arrive in time to save the ship's daughter from being presented as a gift to a Sultan in Algiers?

The film, a big-budget extravaganza from Paramount Pictures, boasts an all-star silent era cast that includes Wallace Beery, George Bancroft, Charles Farrell, and Esther Ralston. Among the crew members is Boris Karloff, famous later for his starring role in 'Frankenstein' (1931).

'Old Ironsides' was filmed at sea off the coast of California's Catalina Island, using a full-scale replica of the original ship. The movie was praised for its authenticity and commitment to historical accuracy. Only a handful of scenes used small-scale models, a rarity for the time.

In addition to its elaborate battle scenes, the film is notable for its high quotient of comedy. At the time, Hollywood was first starting to make motion pictures with stories that delivered all-around entertainment. Cruze was among the directors becoming adept at integrating comedy, drama, romance, and action all into one spectacular audience-pleasing package.

Surprisingly, 'Old Ironsides' sank at the box office in its original release. Critics praised the film, but Jazz Age audiences failed to flock to the historic epic, which was released at the height of the Roaring 1920s.