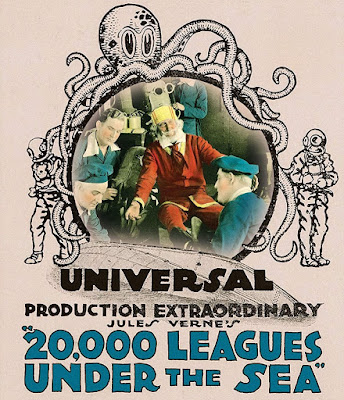 Promotional artwork for the original silent film version of Jules Verne's '20,000 Leagues Under the Sea' (1916).

Today I received this nice note from Johnathan Vail, a silent film fan from Nashua, N.H.:

We have been enjoying your accompaniment for many years and look forward to more.

Anyway with the Jules Verne coming up I thought it would be a fine time to do some steampunk as I was kind of thinking of doing a steampunk photo shoot and Wilton is a pretty good location for it.

So mostly a heads up if there's some new people next week in costume.  And an opportunity if you have a pair of goggles and and top hat...

Wow! Nothing like a little steampunk to liven up rural New Hampshire.

Let's hope this goes viral and downtown Wilton, N.H. (all one block of it) is overrun by people from the past's version of the future.

Who knows? The show is attracting more notice than usual. Check out this extensive story in "Elf," the lifestyle magazine of the Keene (N.H.) Sentinel. (And thanks to writer Nicole Colson for a great job!)

All of this is in response to the upcoming screening of the original silent film version of '20,000 Leagues Under the Sea' (1916). Showtime is Sunday, May 9 at 2 p.m. at the Town Hall Theatre in Wilton, N.H.

More info is in the press release below.

I first encountered the silent '20,000 Leagues' a decade ago, when I accompanied it for the annual 24-Hour Boston Science Fiction Marathon.

At the time, I recall thinking: "Wow, is there a silent film version of everything?"

I've since come to realize that...yes, there is. There's a silent Wizard of Oz. There's a silent Ben Hur and a silent Ten Commandments. There's even a silent 'Risky Business,' although the 1925 version starring Vera Ralston is about as far away from the Tom Cruise edition as the earth is from the moon.

Which brings us back to Jules Verne.The silent version of '20,000 Leagues' is in some ways a salute to that other Verne classic, 'From the Earth to the Moon,' because seeing it today is like visiting another planet.

Let's hope the steampunk contingent turns out in force to lend an other-worldly feel to the whole enterprise. See you there on Sunday! 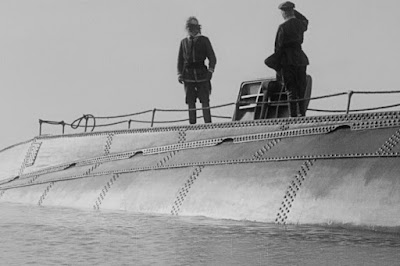 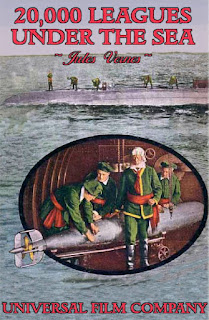 The film has little in common with a later adaption released in 1954 by Walt Disney Studios and starring James Mason. (At left is the dust jacket for the novelization of the movie, which itself was adapted from Verne's novel. Are we all clear on that?)
In honor of extraordinary technical and artistic achievement, the silent version of '20,000 Leagues Under the Sea' was added to the National Film Registry by the Library of Congress.