In this week's hand, two pairs: dramas and comedies—music for four films in five days 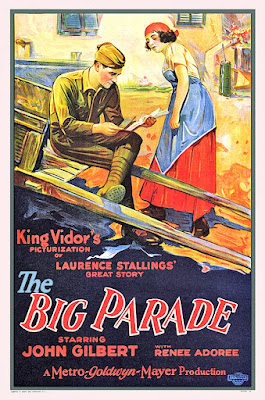 I've caught my breath after October's marathon of Halloween screenings, and just in time.

Why? Because this week the calendar comes back to life (sounds like Halloween all over again) with two big dramas for Veterans Day, then a pair of comedy programs on the weekend.

First up is MGM's sprawling WWI drama 'The Big Parade' (1925), which steps off at 6:30 p.m. sharp on Wednesday, Nov. 10 at the Flying Monkey Moviehouse and Performance Center in Plymouth, N.H.

The screening is in honor of Veterans Day, and there's a lot more info in the press release I've added to the bottom of this post.

On Veterans Day itself (Thursday, Nov. 11), it's another biggie: 'The Four Horsemen of the Apocalypse' (1921), starring Rudolf Valentino.

The large supporting cast includes Alan Hale Sr., father of Alan Hale, Jr., who would go on to play the Skipper in "Gilligan's Island." (Hey, we all have our cultural reference points.)

Showtime for 'Horsemen' is 7 p.m. at the Showroom, a new venue opened during the pandemic by the Colonial Theater in Keene, N.H. See more info by clicking "Upcoming Silent Film Screenings" at the top right hand corner of this page.

More details about those screenings once we get past Veterans Day. 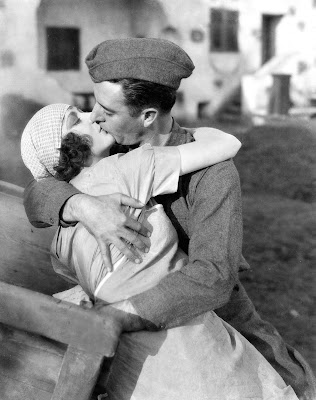 Renée Adorée and John Gilbert communicate without words in 'The Big Parade' (1925).

Epic WWI drama 'The Big Parade' to be screened on Wednesday, Nov. 10 at Flying Monkey

To be shown with live music in honor of Veterans Day; blockbuster silent film changed the way Hollywood depicted war on the screen

PLYMOUTH, N.H. — It was the 'Saving Private Ryan' of its time — a movie that showed audiences war as experienced by a front line soldier whose life is changed forever by the experience

It was 'The Big Parade' (1925), a sprawling World War I epic and a box office sensation that made MGM into a powerhouse studio. It's the latest installment of the silent film series at the Flying Monkey Moviehouse and Performance Center, 39 Main St., Plymouth, N.H.

'The Big Parade,' released just a few years after World War I ended, was hailed by critics as the first Hollywood film to depict the harsh reality of combat and its impact on troops. Its battle scenes were staged on a massive scale and still retain their ability to shock audiences. 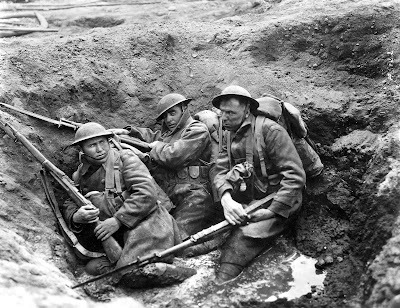 "We felt screening 'The Big Parade' was a suitable way to mark Veterans Day," said Flying Monkey manager Brooks Bartlett. "World War I is now part of history, but this picture is from a time when it was foremost in people's minds. What was then called 'The Great War' was the 9/11 of its day, and this film captures that intensity and allows us to experience it today."

MGM's silent blockbuster ‘The Big Parade’ will be shown with live music on Wednesday, Nov. 10 at 6:30 p.m. at the Flying Monkey Moviehouse and Performance Center, 39 Main St., Plymouth, N.H.