On live scoring 'Dracula' at the Somerville, plus a new way to show 'Nosferatu' to keep it scary 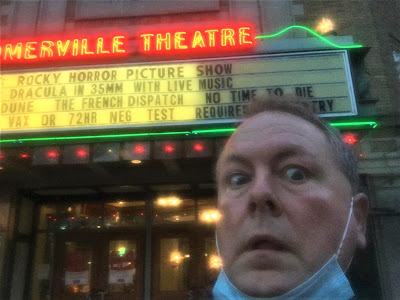 One of the scariest things about 'Dracula' (1931) at the Somerville Theatre: standing in the middle of Holland Street to get the requisite marquee shot.

After all, this wasn't a silent picture. True, there's no music. But it does have dialogue, sound effects, and a certain eerie quality that comes, in part, from the silence.

I didn't want to get in the way of any of that. So I knew going in that there were times when I couldn't —and shouldn't—play anything.

But once in the theater, I found it surprisingly difficult to resist the urge to play music. I accompany more than 100 films each year. And it was just really weird to be sitting there, with a film on the screen and a keyboard in front of me and an audience present, and not play.

As the film unspooled, I felt the character to whom I could most relate was Renfield, with his hunger for spiders representing my hunger to press the keys and make sounds. 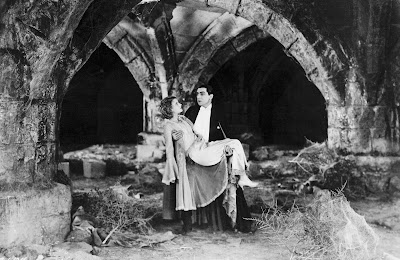 Lugosi and victim in the unfinished basement of Carfax Abby.

Although I improvised the score, I did create a full-fledged 'Dracula' theme in advance, which came in handy and helped the whole thing hold together.

Perhaps the most successful sequence was when Dracula tried to hypnotize Professor Van Helsing.

On screen, played silent, it seems overlong and drawn out, with the quiet broken only by Bela Lugosi's commands to "Come here!"

But with music, I was told afterward that it turned into a scene of considerable dramatic suspense. Hooray!

And in the end, it all seemed to work, as I was glad to receive a thunderous ovation from the 200+ attendees, and with nothing thrown at me—not even the bag of garlic cloves I had given out as a door prize beforehand.

Well, Halloween may be over, but my ongoing silent film music marathon is not.

We go from Lugosi's 'Dracula' to 'Nosferatu' (1922), which I'm accompanying tonight (Monday, Nov. 1) at the Coolidge Corner Theater in Brookline, Mass.

It's ostensibly in honor of the 'Day of the Dead,' but you don't really need an excuse to screen Murnau's classic film. Just as the sign on the railroad tracks tell us that "Any time is train time," theaters should all have signs saying "Any time is Nosferatu time."

Any that's actually a concern. I've done music for 'Nosferatu' a half-dozen times this year. At some point, overexposure may diminish this film's special power over audiences.

So, to remedy that, when I'm appointed King, I will issue an edict that all theaters can only screen 'Nosferatu' unannounced, and only in the middle of other films that people would have come to see.

That would a way to make it really frightening. You would just never know. It would boost the film's reputation immensely, and help box office receipts, as people who wish to see it would have to keep buying tickets hoping to see Nosferatu. It would be like winning the lottery!

And people buy lottery tickets all the time. Why not apply the same logic to movie theaters with 'Nosferatu' the unexpected jackpot prize?

Well, until that happens, your best bet is to come to the Coolidge Corner tonight.

And for now, let me leave you with this unexpectedly amusing marquee shot from the Somerville Theatre: what a way to promote 'Dracula,' who can only come out at night! 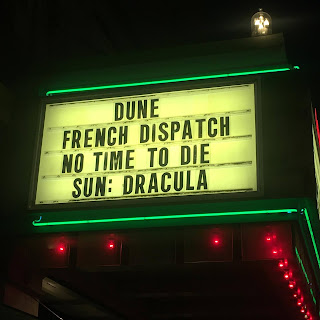 BROOKLINE, Mass.— An iconic local theater will bring its silent movie series back to life with a film about the undead.

'Nosferatu' (1922), the first screen adaptation of Bram Stoker's novel 'Dracula,' will be screened with live music on Monday, Nov. 1 at 7 p.m. at the Coolidge Corner Theatre, 290 Harvard St., Brookline, Mass.

The screening will feature live music for the movie by silent film accompanist Jeff Rapsis. General admission is $23 per person.
The show marks the resumption of the Coolidge's acclaimed 'Sounds of Silents' series, which gives audiences the opportunity to experience early cinema as it was intended: on the big screen, with live music, and with an audience.
The series, like all other Coolidge programming, was paused during the recent pandemic. But with the theater now open, the series is returning. 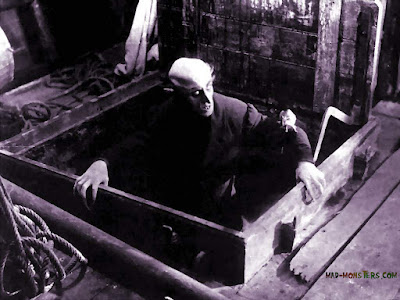 To modern viewers, the passage of time has made this unusual movie seem even more strange and otherworldly.

"The original 'Nosferatu' is a film that seems to get creepier as more time goes by," said Rapsis, a resident of Bedford, N.H. who accompanies silent film screenings at venues across the nation. 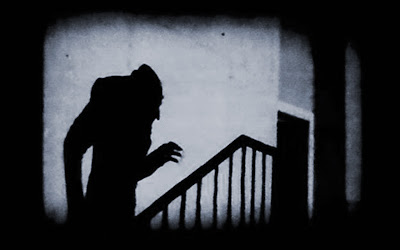 Despite the status of 'Nosferatu' as a landmark of early cinema, it was almost lost forever.

However, intact copies of the film would surface later, allowing 'Nosferatu' to be restored and screened today as audiences originally saw it.
The image of actor Max Schreck as the vampire has become so iconic that it can be seen in a recent 'Sponge Bob Squarepants' episode.
The Sounds of Silents series is made possible by the generous contributions of Dr. Martin and Becki Norman, Dr. Thomas Gutheil, Susan Stoller, and Elizabeth Driehaus.
‘Nosferatu’ will be shown on Monday, Nov. 1 at 7 p.m. at the Coolidge Corner Theatre, 290 Harvard St., Brookline, Mass. as part of the theater's 'Sounds of Silents' series. Admission is $23 per person. For more info and to buy tickets, visit www.coolidge.org or call (617) 734-2500.
Posted by Jeff Rapsis at 12:06 PM