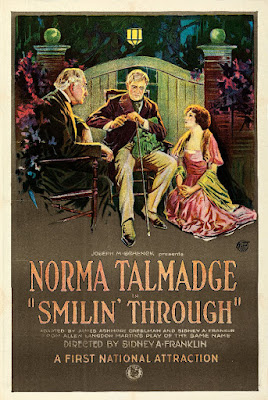 An original release poster for 'Smilin' Through' (1922), the year's No. 3 box office attraction.

If you can't make it to Ireland for St. Patrick's Day, consider visiting Wilton, N.H.

That's where we'll present 'Smilin' Through' (1922), a silent drama starring Norma Talmadge, at the Town Hall Theatre on Sunday, March 13 at 2 p.m.

Set in the Emerald Isle, 'Smilin' Through' is a sentimental tale of love lost and then found across the generations. I'll provide live music.

Please join us to celebrate St. Patrick's Day just a little early by taking in one of the most popular movies of 1922 on the occasion of its 100th birthday.

Sure'n we'll see you at the movies then! 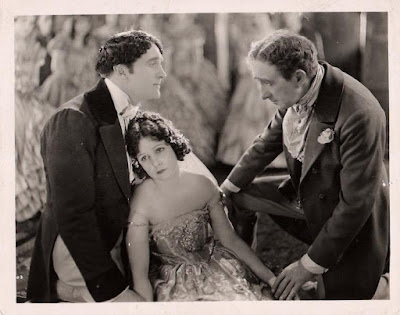 'Smilin' Through,' 1922 box office hit, to be shown with live music on Sunday, March 13 at Town Hall Theatre to celebrate film's 100th anniversary

WILTON, N.H.—Just in time for St. Patrick's Day, a classic film set in Ireland full of romance, drama, and the haunting atmosphere of the Emerald Isle.

It's 'Smilin' Through' (1922), starring legendary actress Norma Talmadge, whose legions of fans made the movie the No. 3 box office attraction of 1922.
See what made 'Smilin' Through' so popular when the picture returns to the big screen to celebrate the 100th anniversary of its release.
'Smilin' Through' will be shown on Sunday, March 13 at 2 p.m. at the Town Hall Theatre, 40 Main St., Wilton, N.H.
Admission is free, with a suggested donation of $10 per person to help support the theater's silent film series.

The classic drama, set in the years before and after World War I, will be shown with live music by silent film accompanist Jeff Rapsis. 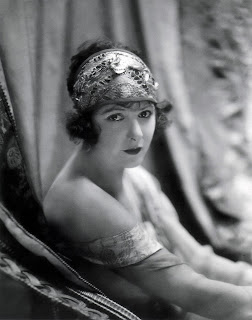 Norma Talmadge, then at the peak of her career, plays the dual role of Kathleen, a young Irish woman, and Moonyean, Kathleen's aunt who died many years ago under tragic circumstances.
Kathleen is in love with Kenneth Wayne, but is prevented from marrying him by her guardian John Carteret, who remains haunted by memories of his thwarted love for Mooneyan.
In a drama that combines romance with the world of spirits, can the tragic fate of Moonyean point the way for Kathleen to find true love at last?
The story, based on a 1919 stage play, was filmed twice more by MGM: in 1932 with Norma Shearer and 1941 with Jeanette MacDonald.
The film was strongly associated with the song 'Smilin' Through,' a sentimental 1919 ballad with lyrics and music by Arthur A. Penn.
The song, inspired by the stage play, remained popular for several decades, recorded by performers ranging from Judy Garland to Bing Crosby.
The screening of 'Smilin' Through' is part of the Town Hall Theatre's ongoing series honoring the 100th anniversary of significant motion pictures that debuted in 1922.

Admission is free, with a suggested donation of $10 per person to help defray expenses. For more info, call (603) 654-3456 or visit www.wiltontownhalltheatre.com.
Posted by Jeff Rapsis at 2:24 PM