Neither snow, nor kidney stones, nor talking cars, kept me from the 2022 Kansas Silent Film Festival 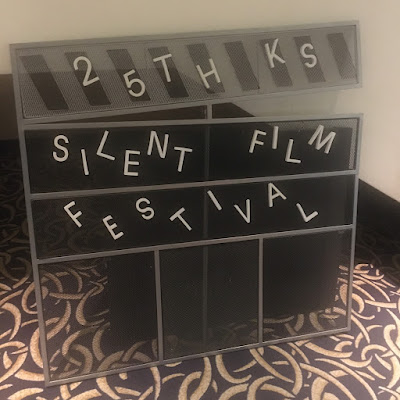 After more than two decades, I remain a big fan of the "biohazard" pattern of the carpeting in the White Concert Hall at Washburn University.

This year's Kansas Silent Film Festival was memorable in part for a few things I hope to soon forget.

For me, it was two things in particular: a pair of kidney stones, which made their unexpected presence known the day before I planned to depart for Kansas.

The announcement came in the form of intense pain coming from the lower right part of my abdomen. Ouch!

I thought it was my appendix. Whatever it was, the pain quickly grew to where I just wanted it to stop.

So instead of heading for the airport to fly out to Kansas, I went to the emergency room. Tests and a scan revealed the culprits: two stones making their way from kidney to bladder.

In no condition to travel, I reached out to festival director Bill Shaffer and let him know I'd be unable to make it this year.

Although really disappointed in myself for not being able to honor a commitment, I knew that the other accompanists there could cover the films I'd been assigned.

It wouldn't be the first time this happened—in 2013, members of the Mont Alto group made it only about half way across Kansas before a blizzard forced them to turn back to their Colorado home.

So the rest of us divvied up their films and the festival went on as scheduled.

How is this possible at the last minute? Well, live film accompaniment encompasses a lot of approaches, and that includes the “I hadn't planned on playing for this title but I'll give it a go” school of music.

At this year's Kansas festival, I knew that my fellow accompanist Ben Model would be on hand. (He'd bring both his hands, actually. Har!) I was hoping Ben would be willing to cover for me, and was glad to hear that he would. 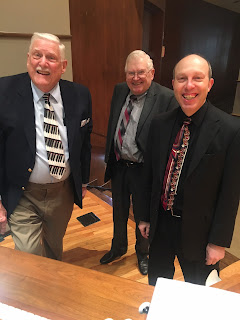 The festival is blessed with other musicians who would fill in as well: longtime music director and organist Marvin Faulwell and his sidekick, percussionist Bob Keckeisen; organist Bill Beningfield; and Rodney Sauer, director of the Mont Alto Motion Picture Orchestra.

So I stayed home that Thursday, dosed with Toredal to numb the pain, and also ameliorate the unhappiness of missing my first Kansas Silent Film Festival since first attending in 2000.

But then Thursday turned into Friday, and I felt much better. The pain was gone. It snowed all day in New Hampshire, making travel difficult. But by late afternoon I felt well enough to make a break for it. Turned out Southwest Airlines was still running flights out of Manchester, and I could get the last out of the day (to Chicago Midway, connecting to Kansas City) at 6:30 p.m.

That would put me in Topeka really late Friday night, but at least I'd be on hand for the whole day Saturday, when the bulk of my films (and the one feature) were scheduled to screen.

Proud of myself for making the effort, we were about a half-hour from landing at Midway when the pain happened again. It put me on the floor of an airport gate area, pretending to stretch but actually trying to find a position to lessen the agony.

Here I was, 800 miles from home and writhing in pain. I'd taken the opioid they'd given me in case the pain came back, but it didn't seem to be working. What to do? There was a flight back to Manchester at a nearby gate, so I went over to find that boarding had completed and the plane was already pushing back.

I was close to calling my in-laws (who live in Chicago) to get me to an emergency room (no way was I paying for an ambulance—that would cause a different and more lasting kind of pain) when the boarding announcement was made for the Kansas City flight.

Rising up, I felt a little better, so decided to board. (What I would do when I got there, I had no idea.) Once seated, the pain returned with a vengeance. A song lyric started going through my mind: "Should I stay or should I go?"

I finally just had to get up, as sitting was intolerable, and made my way to the rear of the plane. I explained what was going on to two flight attendants, who could not have been more sympathetic. They said we had about a half-hour before departure, so a decision didn't have to be made right away.

They let me walk up and down the aisle, which helped, although I'm sure my fellow passengers concluded they were flying to Kansas City with a lunatic. Even the captain got involved, wanting to know what drugs I'd taken and making sure I wasn't an in-flight medical liability, which of course is his job. (I passed—although the kidney stones hadn't.)

Finally it came time to leave, and I chose to tough it out. Once the door closed, there was no turning back. "Prepare to build some character," I thought to myself, as we pushed back from the gate. At least I was next to an empty seat, enabling me to writhe and contort myself within the limits of a seat belt.

How long would this last? Well, I guess the opioid finally kicked in, as the pain began to lessen during the flight. By the time we landed it had mostly subsided. Maybe I would make it after all.

But what would I do when I got there? What if this happened during a film? Well, we'd find out.

As I sat on the bus to the rental car center, I contemplated one remaining challenge: it was after midnight, and I still had to drive an hour to Topeka, opioids and all.

And then I dodged a bullet. It was so late that all the rental car desks were shut except one: Avis—by some stroke of divine magic, the company I'd booked with. They gave me a brand new (less than 300 miles) Kia Soul, which was equipped with nanny software that bings at you if it doesn't like how you change lanes.

"Consider taking a break!" read a dashboard display panel, with a coffee cup icon complete with little heat lines rising above it.

"Mind your own business," I responded, looking for the switch to disable this annoying feature. 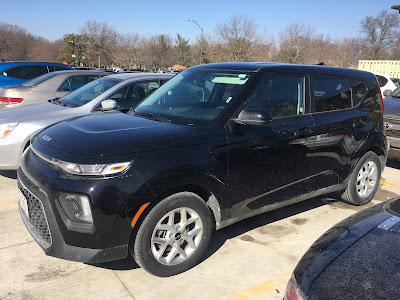 My ride. I never did figure out how to turn off the nanny function.

I got on the Kansas Turnpike (I-70) and headed west to Topeka, being extra careful to keep at the speed limit. The last thing the Kansas Silent Film Festival needed was a headline like:

VISITING MUSICIAN JAILED FOR OPIOID POSSESSION AND YELLING AT CAR

Why am I telling you all this? Maybe it's a window into the ups and downs of the glamorous life of a silent film accompanist. Maybe it'll prompt you to take better care of yourself: drink more water, don't lapse into winter inactivity, and cut down on the cheese!

But I made it, and by the time I pulled into the parking lot of the Hyatt in Topeka, the pain was gone. For now. That's the thing. I'd had two episodes of intense pain. When might it happen again?

Next thing I knew, it was the next morning and I was downstairs at breakfast chatting with Rodney Sauer of Mont Alto and greeting all the familiar folks who are such a huge part of why even malfunctioning kidneys can't keep me from coming back to this festival.

And I found that I my problems were minor indeed when compared to what others had faced or were facing.

Like how? Rodney's house in Colorado just missed being burned to the ground last year in a wildfire. (A cellist he knows lost everything.) Long-time festival supporter Paul Post had been severely injured in a bicycle accident earlier that week and was hospitalized. (He continues to recover.) Festival attendee Jim Reid made it all the way up from Texas (in an ice storm) only to slip on the hotel walkway, landing on his face. (He seemed to be doing okay.)

So Saturday's festival activities started up, and I was able to get through each film I'd been assigned. Ben Model later mentioned the syndrome of how the body seems to somehow postpone problems during a performance, and I've found that to be true. 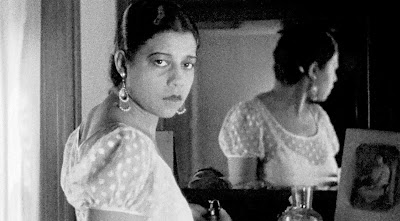 My big film was the one feature I'd been assigned: The Oscar Micheaux drama 'Within Our Gates' (1921), a 90-minute drama that closed the afternoon program. I asked Ben to stand by, or at least be in the hall somewhere, during this screening in case I wasn't able to get through it.

But the film started, and I pressed a big "C" in four octaves on the White Concert Hall's wonderful Steinway grand, and off we went. Before long, I'd become completely engaged—it's actually a tough film to score and requires concentration to bring it off.

Because of that, I completely forgot that less than 24 hours ago I was face down on the carpeted floor of a gate area in Chicago. Another example of how silent film can transport a viewer to an alternate (and pain-free) state of mind.

(For an excellent essay on 'Within Our Gates,' check out this piece by Shari Kizirian from the San Francisco Silent Film Festival.)

Well—if you'd like a run-down of this year's Kansas Silent Film Festival, attendee and adviser Bruce Calvert always posts a write-up of what screened. It's posted on Nitrateville and I encourage you to check it out.

Many thanks to festival director Bill Shaffer for putting up with my last-minute plan changes. We joke that at the Kansas Silent Film Festival, sometimes there's more drama off-screen than on.

And thanks to everyone at the festival for their kind comments and wishes of good health—too many folks to mention by name for fear of leaving someone out, but all very much appreciated.

As Stan says to Ollie in 'Blockheads' (1938): I'm better now. Truth is, although my two stones are still "in transit," I haven't had any more severe attacks since this year's visit to Topeka.

So we can add that to the many reasons the Kansas Silent Film Festival is worth attending: "Known to Reduce Kidney Stone Pain."

Now—if only I could have gotten that car to shut up.