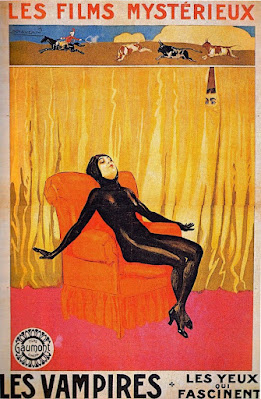 Tomorrow, I'll sit down and do music for the single longest silent movie I've ever accompanied.

It's 'Les Vampyres' (1915), a French crime thriller that clocks in at more than seven hours in total.

We'll then finish the job by running the final four parts on Sunday, Sept. 18, again starting at 2 p.m.

Screenings are at the Town Hall Theatre in Wilton, N.H. Admission is free, but a donation of $10 per person is suggested to defray expenses. 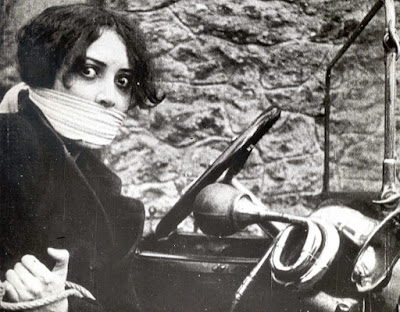 No! Not seven hours of silent film! I'll never talk!

It's a chance to see this rarely screened classic as intended: on the big screen, with live music, and with a live audience. That's where you come in. (Actually, you come in through a door. Sorry, but I couldn't resist.)

More info in the press release below about 'Les Vampyres,' which was made in Paris during World War I and influenced future generations of filmmakers.

Many thanks to Dennis Markevarich, the Town Hall Theatre's long-time owner/operator, for green-lighting what amounts to a two-day marathon of obscure-but-important French cinema.

How will it go? I'll report back here after it's done.

Either that, or you'll need to check your local obituaries. 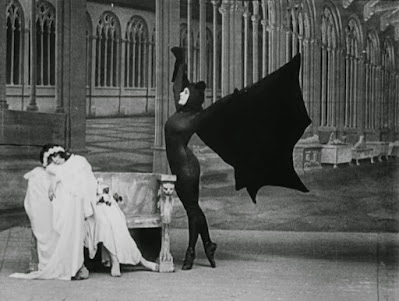 WILTON, N.H.—It's a cinematic achievement so big, it takes two days to show.

It's 'Les Vampyres,' an early French crime thriller produced in 1915. Running more than seven hours, it's considered one of the longest films ever made.

The complete epic, consisting of 10 chapters ranging from 15 minutes to an hour in length, will be shown with live music over two days at the Town Hall Theatre in Wilton, N.H.

Chapters 1 through 6, beginning with "Episode 1: The Severed Head," will be shown on Saturday, Sept. 17 starting at 2 p.m.

Each day will feature about 3½ hours of 'Les Vampyres,' a drama about a bizarre underground crime syndicate in Paris.

The marathon screenings will be accompanied by silent film musician Jeff Rapsis, who will improvise a live score for the entire seven-hour epic.

"If you're looking to immerse yourself in a forgotten world, there's no better way than to give yourself up to 'Les Vampyres,' " Rapsis said. "It's a movie-going experience you'll never forget." 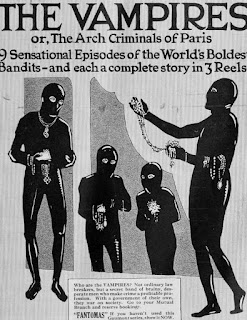 'Les Vampyres' was directed by Louis Feuillade, a popular French crime novelist in the pre-World War I era who began making films in 1906.

Set in Paris, the main characters of 'The Vampyres' are a journalist and his friend who investigate a bizarre underground crime gang known as The Vampires.

Feuillade made the film quickly and inexpensively with very little written script, usually writing the premise and relying on the actors to fill in the details.

Upon its initial release, "Les Vampyres" was a massive success, making Musidora a star of French cinema.
Much of the film's success was due to Musidora's performance as the antagonist Irma Vep, who fit well with the archetypes of "vamp" and "femme fatale," often being compared to Theda Bara.
The film is considered by many to be Feuillade's magnum opus and a cinematic masterpiece. It's recognised for developing thriller techniques adopted by Alfred Hitchcock and Fritz Lang, and for its influence on the avant-garde cinema directors such as Luis Buñuel and Henri Langlois.

'Les Vampyres' is included in the book '1001 Movies You Must See Before You Die.'

The idea of the criminal gang was possibly inspired by the Bonnot Gang, a highly advanced anarchist group who went on a high-profile crime spree in Paris during 1911–1912.

The style of 'Les Vampyres' has been compared to that of a pulp magazine. None of the episodes employ the "cliffhanger" mechanic as popularised by such multi-chapter serials as 'The Perils of Pauline.'

Despite World War I limiting the audience for the film, it was a huge success in France.

French police, however, condemned the series for its glorification of crime and dubious morality. Some of the episodes were temporarily banned, but these bans were retracted after a personal appeal from Musidora.

Overlooked for a half-century, 'Les Vampyres' was rediscovered by modern audiences at a 1965 New York Film Festival screening.

In recent years, critics have praised 'Les Vampyres' for the sheer strangeness of writer/director Feuillade's vision.

"Like the pulp novels and magazine serializations it grew out of, 'Les Vampyres' has some of the logic of a fever dream." wrote a critic for the Austin (Texas) Chronicle in a 2014 reappraisal.

"It seems to come from the same steadily-encroaching dementia that intrudes upon a penny-a-word pulp author as he falls under the rhythmic spell of his own typewriter keys at 4 in the morning and lets his dreams take over for a page or two."

Sean Axmaker, writing for Turner Classic Movies called it "a strange and wonderful masterpiece of elegant beauty and cinematic surprises."

Rianne Hill Soriano of Yahoo! Movies said that "for its historical and cinematic contexts as one of the most instrumental works in the evolution of filmmaking both as an art form and an industry, 'Les Vampyres' is a valuable addition to a cinephile's movie collection."

Screenings on both days will start at 2 p.m.

Admission is free; a donation of $10 per person at each screening is suggested to help defray expenses.