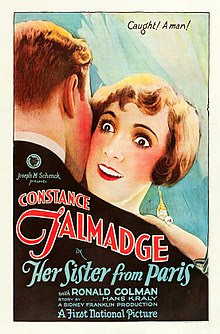 A poster promoting Constance Talmadge in 'Her Sister from Paris' (1925).

Tonight, a screening of the hilarious society comedy 'Her Sister from Paris' will mark the final show of the 2022 silent film series at Brandon Town Hall in Brandon, Vt.

Showtime is 7 p.m., admission is free, and yours truly will be at the keyboard. The setting: Vienna, so expect lots of music in 3/4 time.

Lots more about tonight's screening is in the press release attached below. Hope you'll drop by if you're within driving distance.

For now, a quick report on a screening of 'So's Your Old Man' (1926) the W.C. Fields silent that we screened at the Flying Monkey Moviehouse and Performance Center this past Wednesday night. 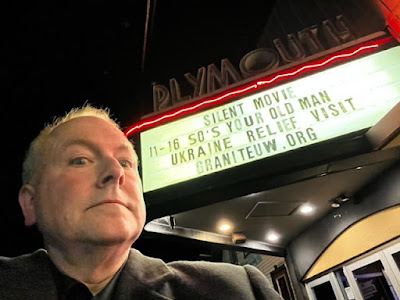 Me under the Flying Monkey marquee.

A special guest was on hand for this event, at least in spirit. Prior to the screening, Harriet Fields (the granddaughter of W.C.) sent me a note to read to the audience.

Thank you for screening "So's Your Old Man" this Wednesday, November 16, the second W.C. Fields film added to the National Film Registry of the Library of Congress (2008). "You're Telling Me" is the talking version filmed in Hollywood in 1934. In both these classic films, W.C. Fields scene on the train with Princess Lescaboura is an arrestingly tender and endearing portrait of the real W.C. Fields-my grandfather and spiritual inspiration. Thank you to the W. C. Fields Facebook Group for alerting us to your most appreciated screening. Warmest regards to all and special hug to our dear Jeff Rapsis, piano accompanist extraordinaire.

How nice of Harriet to provide a personal welcome to viewers of one of her grandfather's rarely screened Paramount silents.

I'm pleased to report our audience enjoyed the film immensely. Perhaps the biggest laugh came when the wife of Fields' character is told he's done something simply marvelous, and her response (via intertitle) is.

Well, he didn't, and Fields himself lives on through the films and of course through the efforts of Harriet and her other family members.

And now it's on to Brandon, Vt., where tonight we'll cavort with Constance Talmadge and Ronald Colman in a very funny comedy, 'Her Sister From Paris.'

Hope to see you there! And here's the press release... 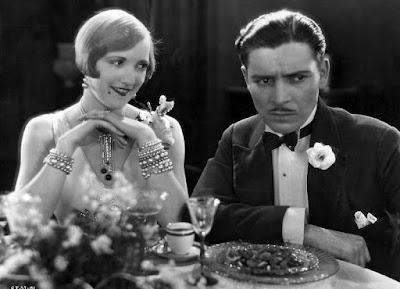 Constance Talmadge and Ronald Colman in 'Her Sister from Paris' (1925).

'Her Sister From Paris' to screen on Saturday, Nov. 19 at Brandon Town Hall

BRANDON, Vt.—The scene: Europe. The cast: Rich people. Get swept off your feet by not one but two privileged ladies, both played by amazing actress Constance Talmadge, in this effervescent battle-of-the-sexes comedy.

Silent film with live music returns to Brandon Town Hall with a screening of the comedy 'Her Sister from Paris' on Saturday, Nov. 19 at 7 p.m.

The program will be presented with live music by silent film accompanist Jeff Rapsis. The screening is free and open to the public, with donations accepted and refreshments for sale.

In 'Her Sister from Paris,' Ronald Colman and Constance Talmadge play a wealthy American society couple living in Vienna.

Due to an argument, she leaves to stay with her mother. At the railway station she meets her identical twin, a celebrated dancer in Paris (also played by Talmadge), who agrees to trick the husband to help rekindle her sister's marriage.

The fun starts when both the husband and his friend, an official at the British Embassy, fall in love with the sister, leading to a dizzying round of complications.

Among the most popular stars of the silent era, Constance Talmadge specialized in light "society" comedies. However, she had acting and pantomime skills that made her a versatile actress able to tackle any role.

In 'Her Sister From Paris,' Talmadge delivers a virtuoso performance playing both sisters. Although their appearance is identical, each woman is quite different from the other, which Talmadge conveys through body language and on-screen attitude. 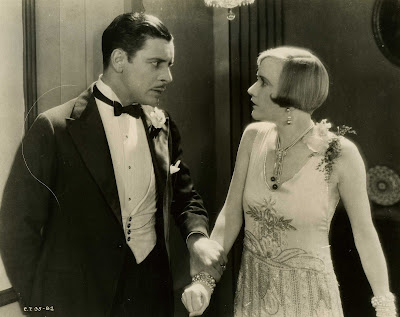 Ronald Colman, whose career would go on to span radio and television, was already a popular leading man in films at the time 'Her Sister From Paris' was made. Colman more than holds his own as the two sisters conspire against him.

The screening of 'Her Sister from Paris' provides local audiences the opportunity to experience silent film as it was intended to be shown: on the big screen, in restored prints, with live music, and with an audience.

"If you can put pieces of the experience back together again, it's surprising how these films snap back to life," said Rapsis, a New Hampshire-based silent film accompanist who creates music for silent film screenings at venues around the country.

"By showing the films as they were intended, you can really get a sense of why people first fell in love with the movies."

The feature-length 'Her Sister From Paris' will be preceded by a short subject from the silent era.

The screening of 'Her Sister from Paris' at Brandon Town Hall is sponsored by Harold & Jean Somerset.

'Her Sister From Paris' (1925) starring Constance Talmadge and Ronald Colman, will be screened with live music on Saturday, Nov. 19 at 7 p.m. at Brandon Town Hall and Community Center, 1 Conant Square, Route 7 in Brandon, Vt.