This Wednesday night! It's Rin Tin Tin to the rescue Dec. 14 at the Coolidge Corner Theatre 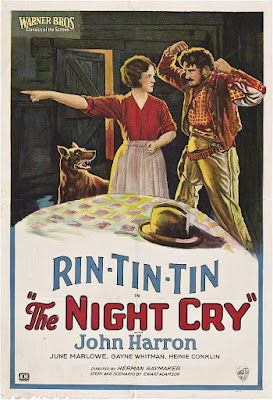 I'm delighted to be doing live music this week for what I feel is one of the unknown gems of the silent era:'The Night Cry' (1926), an action-adventure featuring canine star Rin Tin Tin.

The film is being screened on Wednesday, Dec. 14 at 7 p.m. at the Coolidge Corner Theatre, 290 Harvard St., Brookline, Mass. More info in the press release below.

The Rin Tin Tin silents were all immensely popular starting with the first releases in 1922, after which Warner Bros. started churning them out as fast as possible.

But 'The Night Cry' has a special quality that comes from the studio searching for fresh ways for their dog star to face peril and keep audiences coming.

As a result, in this picture 'Rinty' (his nickname at the time) faces off against one of the most unusual villains in movie history: a giant California condor!

Yes—in 'The Night Cry,' it's not enough for Rin Tin Tin to battle a community of sheep ranchers who unjustly accuse him of killing newborn lambs. (One guess as to who's actually responsible.)

No—he must also battle the enormous bird of prey, source of the film's title and also any number of life-or-death encounters for our four-legged star as he strives to prove his innocence.

So with all this going for it, 'The Night Cry' is a great example of the kind of fast-paced melodramatic picture that prompted audiences all over the world to first fall in love with motion pictures. And it still has a slightly over-the-top sensibility that still causes audiences to gasp and cheer nearly a century after its release.

I encourage you to attend tomorrow night's screening to recapture the sense of wonder that cinema once provided in such abundance.

Plus you get to see a dog match wits with a giant bird! 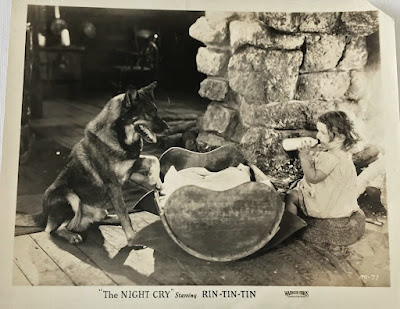 BROOKLINE, Mass. — He couldn't speak. But that was no handicap during the silent film era.

See for yourself on Wednesday, Dec. 14 at 7 p.m., when the Coolidge Corner Theatre screens a vintage Rin Tin Tin silent adventure film with live music.

In 'The Night Cry' (1926), Rin Tin Tin must clear his name after being accused of killing sheep, all while battling an unusual non-human nemesis—a giant California condor!

'The Night Cry' will be shown at the Coolidge Corner Theatre, 290 Harvard St., Brookline, Mass. Admission in $23 per person; tickets available at the door or via www.coolidge.org

The film—the latest installment in the Coolidge's 'Sounds of Silents' series—will be shown with live musical accompaniment by Jeff Rapsis, a composer and performer who specializes in scoring silent film.

Rin Tin Tin films were produced by the then-struggling Warner Bros. studio. They proved immensely popular around the world, with audiences marveling at the then-new German Shepherd breed's feats of derring-do as he outsmarted his human co-stars. 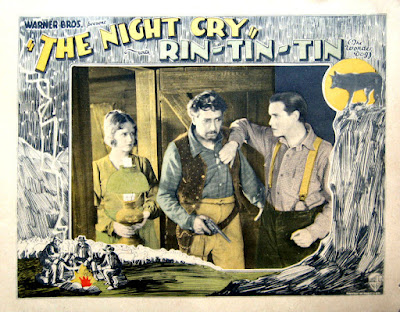 Rin Tin Tin became so popular, he was named "Best Actor" at the first-ever Academy Awards in 1929—until officials opted for a re-vote in favor of human performer Emil Jannings.

'The Night Cry' is unusual in that "Rinty" (the dog's nickname) battles not just human foes, but also a murderous California condor.
The original promotional copy for 'The Night Cry' captures the excitement that made Rin Tin Tin a box office sensation:
"A story of tense thrills and tenderness, of a dog's loyalty and man's cruelty—tense with the thrills of a terrifying fight between a giant condor and a Shepherd dog."
To improvise a live musical score for 'The Night Cry,' silent film musician Jeff Rapsis will use a digital synthesizer to recreate the texture of a full orchestra.

'The Night Cry' will be screened with live music on Wednesday, Dec. 14 at 7 p.m. at the Coolidge Corner Theatre, 290 Harvard St., Brookline, Mass. as part of the theater's 'Sounds of Silents' series.