Coming up next: sci-fi epic 'Metropolis' on Saturday, Jan. 7 at Keene's Colonial Theatre 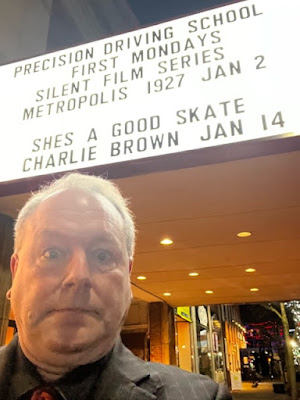 Let's hear it for the Precision Driving School of Greenfield, Mass. for sponsoring a local theater's silent film series!

That's what'll happen this weekend, when Fritz Lang's ground-breaking sci-fi epic hits the big screen yet again: this time on Saturday, Jan. 7 at 4 p.m. at the Colonial Theatre in Keene, N.H.

Lots more detail about this screening is in the press release below.

This will actually be the fourth 'Metropolis' screening I've accompanied in the past three weeks. That's a lot of futuristic fantasy!

The four screenings were booked separately by programmers at different venues, which I take as a sign of the film's enduring popularity. Anywhere you go, it seems people still buy tickets and show up for 'Metropolis.'

So if you're in the Monadnock area of southwestern N.H. this Saturday, please drop on by and experience one of the great achievements of the silent era as it was intended to be seen: on the big screen, with a restored print, with live music, and with an audience!

I usually describe a screening as a "rare chance" to experience early cinema as it was intended. But in the case of 'Metropolis,' I can't really say it's rare, having done music for it so often.

Plus, if you can't make it to Keene this weekend, I'm doing 'Metropolis' again in April at the Rex Theatre in Manchester, N.H. Stay tuned on that one... 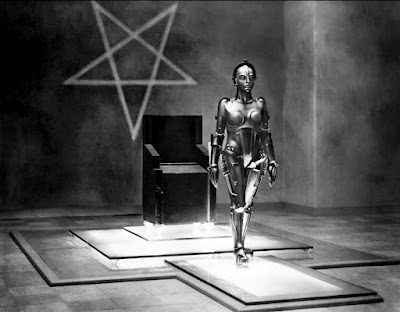 From 'Metropolis': A star is born...sort of.

KEENE, N.H.—A silent film hailed as the grandfather of all science fiction fantasy movies will be screened with live music in Keene next month.

Admission is $10.50 adults, $8.50 youth. Tickets are available online at http://thecolonial.org or at the door.

In reviving 'Metropolis,' the Colonial aims to show silent movies as they were meant to be seen—in high quality prints, on the big screen, with live music, and with an audience.

The version of 'Metropolis' to be screened at Colonial is a newly restored edition that includes nearly a half-hour of missing footage cut following the film's premiere in 1927. 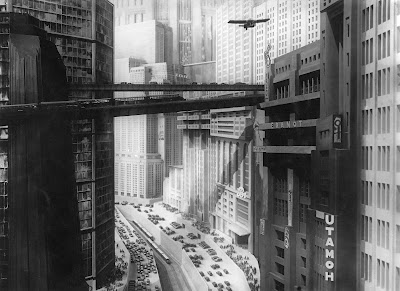 From Metropolis': note the sign in the bottom right corner. It doesn't seem to represent anything real in any language I recognize. But it IS an anagram for both 'A Mouth' and 'Uh, Atom.'

The discovery led to a 2½-hour version that debuted in 2010 to widespread acclaim. This fully restored edition will be screened at the Colonial.

Rapsis creates new music for silent films that draws from movie scoring techniques that today's audiences expect from the cinema.