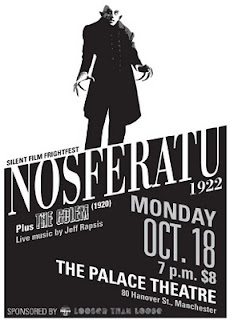 Here's the press release for our screening of 'Nosferatu' (1922) and 'The Golem' (1920) at the Palace Theatre in Manchester, N.H. on Monday, Oct. 18 at 7 p.m. Designer Glenn Given did a great job with the black & white poster, which we're putting up all around the town.

MANCHESTER, N.H.—Get into the Halloween spirit with a pair of timeless silent horror films to be screened with live music at the Palace Theatre in Manchester, N.H. on Monday, Oct. 18. General admission is $8 per person.

'Nosferatu' (1922), the first screen adaptation of Bram Stoker's novel 'Dracula,' remains a landmark work of the cinematic horror genre. Directed by German filmmaker F.W. Murnau, 'Nosferatu' was among the first movies to use visual design to contribute to an overall sense of terror. 'The Golem' (1920), a precursor of the Frankenstein films, tells the story of an artificial man made of clay and brought to life to protect Jews from persecution.

To modern viewers, the passage of time has made both these unusual films seem even more strange and otherworldly. It's an atmosphere that silent film accompanist Jeff Rapsis will try to enhance in improvising live music on the spot for the screenings.

In 'Nosferatu,' German actor Max Schreck portrays the title character, a mysterious count from Transylvania who travels to the German city of Bremen to take up residence. A rise in deaths from the plague is attributed to the count's arrival, but only when a young woman reads "The Book of Vampires" does it become clear how to rid the town of this menace.

In 'The Golem,' set in 16th century Prague, a rabbi creates a giant creature from clay, called the Golem. Using sorcery, brings the creature to life in order to protect local Jews from persecution. Like 'Nosferatu,' 'The Golem' is also a German film that uses surrealistic sets and lighting to create an eerie mood. The story is taken from a medieval Jewish legend.

Both films were filmed by legendary German cinematographer Karl Freund, who went on to work on such Hollywood horror classics as 'Dracula' (1931) and 'The Mummy' (1932).

All movies in the Palace Theatre's silent film series were popular when first seen by audiences in the 1920s, but are rarely screened today in a way that allows them to be seen at their best. They were not made to be shown on television; to revive them, organizers aim to show the films at the Palace as they were intended—in top quality restored prints, on a large screen, with live music, and with a live audience.

Screenings in the Palace Theatre's silent series take place on Mondays at 7 p.m. ‘Nosferatu’ and ‘The Golem’ will be shown on Monday, Oct. 18 at 7 p.m. the Palace Theatre, 80 Hanover St., Manchester, N.H. Admission is $8 per person, general admission seating. Tickets available at the door or in advance by calling the Palace Theatre box office, (603) 668-5588 or online at www.palacetheatre.org.

“Early film version of Dracula is brilliantly eerie, full of imaginative touches that none of the later films quite recaptured.”
—Leonard Maltin

“A masterpiece of the German silent cinema and easily the most effective version of Dracula on record.”
—Dave Kehr, The Chicago Reader

CRITIC COMMENTS ON ‘THE GOLEM’

“ ‘The Golem,’ a carefully crafted and visually impressive work, has lost little of its power over the decades.”
—TV Guide’s Movie Guide
Posted by Jeff Rapsis at 1:43 PM