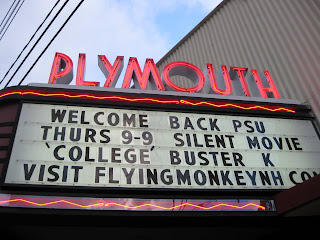 Went up to Plymouth, N.H. last night (Thursday, Sept. 9) for a screening of 'College' (1927) starring Buster Keaton. Only the second show up there in what could eventually be a good series, but it does take time for word to get around and for an audience to build. It's a college town, home to Plymouth State University, which is now back in session, but that didn't seem to result in many audience members—yet.

In terms of music, an okay screening. Preceded by Keaton's 'The Goat' and Chaplin's 'Pawnshop,' which produced good laughs though what I did felt scattered because of some pre-show distractions. It's amazing that what happens before a screening can make so much difference in my ability to concentrate, but I've found it's true. Maybe the mark of a serious performer is that he or she is able to come through no matter what happens, but I find I can't do that just yet. Maybe with time.

The Flying Monkey Movie House and Performance Center is an unusual venue because, unlike most theaters I've played in, it actually offers you the choice of enjoying a full meal with table service during the screening. I'm not so sure how I feel about that, especially if the food continues through the screening—increasingly, I find it's important for the films to be the sole focus, or they just don't work as well. Maybe I'm just being too high-falutin'. Well, the food does bring in people, so in that sense it's a good thing.

Many thanks, by the way, to Manchester artist Peter Noonan for coming along and helping with projection. If you need any artwork done, Peter's the guy. Check out his Web site at www.noonanarts.com

Off to Ogunquit this weekend for another chapter in the 'College' road show, and then it's 'Robin Hood' at the Palace Theatre in Manchester on Monday night. Looking forward to creating music to bring that one to life.
Posted by Jeff Rapsis at 11:17 AM