It's time for 'College' 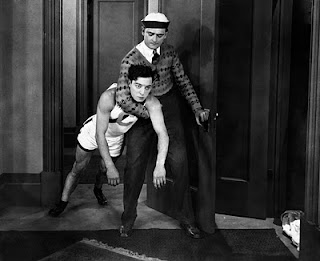 Starting next week, this adventure takes on the form of a road show of sorts. In two weeks, I'm playing for Buster Keaton's feature 'College' (1927) in three venues, each in a different state.

What's up with this? I have to admit, it kinda boils down to efficiency. While I love to score films that are new to me, it does take some time to preview them and work up suitable original material to use during the screening.

Yes, I can play a film cold (having not seen it) but for me that's often not the recipe for bringing out the best in a particular silent film, which is what this is all about, nor does it give me the satisfaction of creating effective original stuff in the first place.

In playing for a film, I can always draw from a growing bank of material that I've done for other movies. But that rarely seems to be as effective as developing new tunes and chord sequences specifically for a film -- material that reflects my sense of the film's mood, locale, structure, and so many other elements that somehow fuel the music.

So when you've got three screenings scheduled in a short period of time, it's only smart to focus on one program so you can do it well in all three places, as long as they're different places and not drawing from potentially the same audience pool. 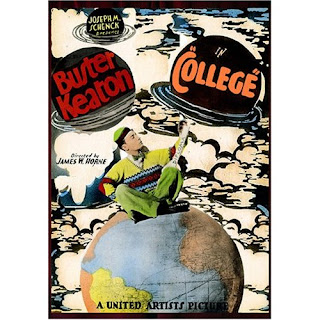 In this case, the venues are relatively far apart, even in as compact an area as northern New England. So there's little overlap likely, hence the same feature, 'College,' as centerpiece of each program. Not only that, but I'm keeping the same shorts (no, not the ones I'm wearing) as well: another Keaton, 'The Goat,' and Chaplin's 'The Pawnshop.' We ran both last week at our regular series in Wilton, N.H. and audience reaction was very strong, so while they're fresh in my head, why not take them on the road, too?