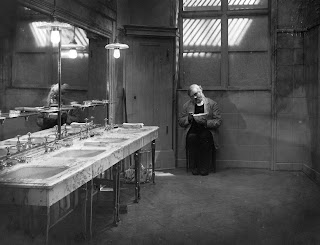 Here's the text of a press release that went out about 'The Last Laugh' (1924), which we're screening at the Wilton (N.H.) Town Hall Theatre on Sunday, Sept. 26. I'm excited about this one. Who would have thought that cinematographer Karl Freund would go on to shoot the "I Love Lucy" sitcom decades later?

WILTON, N.H.—'The Last Laugh' (1924), a German silent film drama about a hotel doorman demoted to washroom attendant, will be screened with live music on Sunday, Sept. 26 at 4:30 p.m. at the Wilton Town Hall Theatre in Wilton, N.H.

The screening is free and open to the public, with donations accepted to defray costs.

In 'The Last Laugh,' regarded as one of German director F.W. Murnau's best pictures, the story is told entirely in visual terms, without the use of title cards. The film, which follows the mental breakdown of an aging man who loses his position of authority, is also noted for its revolutionary use of camera movement.

The Wilton screening will use a fully restored print that shows the film as audiences would have originally experienced it. 'The Last Laugh' (original German title: 'Der Letzte Mann') will be accompanied by live music by New Hampshire composer Jeff Rapsis, who specializes in silent film scoring. Rapsis will improvise the score on the spot during the screening.

Critics and film writers regard 'The Last Laugh' as a landmark of early cinema.

" 'The Last Laugh' is a masterpiece of psychological study, perhaps the best ever portrayal of what goes through one man's mind under varying situations ... It is absolutely mind-boggling to see Emil Jannings age at least 10 or 15 years right in front of our eyes in the course of a couple of minutes," wrote author Robert K. Klepner in 'Silent Films' (2005).

Critic David Kehr of the Chicago Reader described 'The Last Laugh' as "the 1924 film in which F.W. Murnau freed his camera from its stationary tripod and took it on a flight of imagination and expression that changed the way movies were made."

The film's director of photography, Karl Freund, set new standards of cinematography in 'The Last Laugh,' setting up the camera to move through corridors and "see" action through a character's eye-view. Freud's long career later included work in television in the 1950s in Hollywood, when he developed the "three camera" system for the "I Love Lucy" show, which became the standard format for shooting situation comedies.

The Wilton Town Hall Theatre's silent film series gives movie-goers the chance to experience silent films the way they were intended to be seen: in best quality prints on the big screen with live music, and with an audience. See for yourself the pictures that made audiences to first fall in love with the movies!

Admission to 'The Last Laugh' is free, with donations accepted to defray costs. For more info, visit www.wiltontownhalltheatre.com or call (603) 654-3456.
Posted by Jeff Rapsis at 10:57 AM