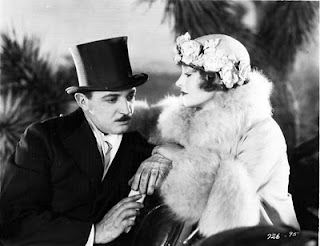 Got an exciting screening coming up: the Raymond Griffith comedy 'Paths to Paradise' (1925) as part of this weekend's Somewhere North of Boston film festival at Red River Theatres in Concord, N.H. This festival of independent films, revived this year after being dormant for a bit, is a great event to celebrate the achievements and potential of non-mainstream cinema.

And though 'Paths to Paradise' was hardly a niche film when it was released, today the whole genre of silent film stands as a category that's definitely outside the herd, and organizers were kind enough to offer me a slot.

The basis for showing 'Paths' is two-fold, actually: first, it's hardly ever screened, and then also there's a slight New Hampshire connection, as mentioned in the press release below. Hope to see you at the screening! (By the way, turns out there are individual tickets available on a first-come, first-serve basis, which I didn't know about when I sent out the info below.)

CONCORD, N.H.—He was a silent film star who really was silent, thanks to a childhood vocal injury. He was Raymond Griffith, the "Silk Hat" comedian, whose popularity in the 1920s rivaled that of Charlie Chaplin. But Griffith's lack of a speaking voice led to an abrupt end to his on-screen career when talkies arrived in 1929. Since then, most of his films have been lost, causing Griffith to be virtual unknown today. 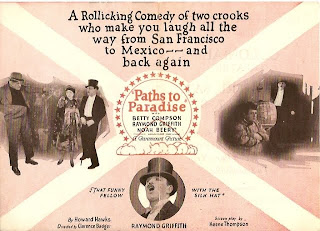 But the elegantly dressed comic, who as a youngster attended St. Anselm Prep School in Goffstown, N.H., will return to the cinematic spotlight once again at the upcoming Somewhere North of Boston film festival. 'Paths to Paradise' (1925), one of his few surviving works, will be shown with live music on Saturday, Nov. 20 at 7 p.m. at the Red River Theaters, 11 South Main St., Concord, N.H. Admission is by weekend pass or day pass to the festival.

The Somewhere North of Boston film festival is a grassroots effort to showcase and support independent filmmaking. Running from Friday, Nov. 19 through Sunday, Nov. 21 at the Red River Theatre complex in Concord, N.H., it strives to bring films to the area that local audiences might not otherwise see. Proceeds from the SNOB Film Festival will be used to support the arts.

This year, organizers chose to include a vintage silent film to acknowledge the important and today largely unknown achievements of early filmmakers. 'Paths to Paradise,' which has no soundtrack, will be brought to life in the manner it was originally intended: on the big screen, in a good print run at the proper speed, with music performed live and with an audience.

"All those elements are important for silent film to succeed," said Jeff Rapsis, a New Hampshire-based musician and composer who specializes in accompanying silent film. "These movies weren't designed to be seen at home alone on your TV screen, where they rarely have an impact. However, if you can show them as they were intended, it's surprising how they can come back to life. These are the films that caused our great-grandparents to first fall in love with the movies, and with good reason."

'Paths to Paradise' (1925) stars Griffith as a polished con man who competes with a feisty female jewel thief to steal a heavily guarded diamond necklace. The film, which costars Betty Bronson, finishes with a wild car chase through the California desert. Unfortunately, all existing prints of 'Paths to Paradise' are missing the final 10 minutes, but the film ends at a point that completes the plot and provides a satisfying finish.

"Griffith's character was that of a worldly, shrewd, and quick-thinking gentleman, usually dressed in a top hat and a cape, who enjoyed outwitting con artists and crooks at their own game," said Rapsis, who has composed new material for the screening and will use it to improvise the full score. "It turns out he was very different from Chaplin or Buster Keaton, and so were his films—they seem a bit more cynical and so perhaps more modern. We've shown them before and they hold up well with a live audience today."

Born in Boston in 1895, Griffith injured his vocal cords at an early age, rendering him unable to speak above the level of a hoarse whisper. After appearing in circuses and attending at least one year (1905-06) at St. Anselm Preparatory School in Goffstown, N.H., he went on to serve in the U.S. Navy prior to World War I and in 1915 wound up in Hollywood, where the movie business was already booming.

Early on, Griffith worked at Mack Sennett's Keystone studio, where he developed a reputation as an excellent actor on screen and a superb comedy writer and director. He eventually concentrated on behind-the-camera duties, making him Sennett's right-hand man for a time, but he eventually moved to the then-new Paramount studios in the early 1920s, where he began to appear again in on-camera roles.

Griffith's mastery of character parts made him immediately popular, prompting Paramount to star him in his own movies starting in 1924. In the next few years, he completed a dozen feature films, most of which today are lost due to neglect or improper storage. If not cared for properly, older film stock will decompose and sometimes burst into flames. About 80 percent of all silent film is presumed lost today.

"Though he's not as well known today as Charlie Chaplin, Raymond Griffith was doing some really good work during the peak of his career," Rapsis said. "It's great that film-goers will get a chance to appreciate Griffith's work as part of this year's SNOB festival."

'Paths to Paradise' will be shown on Saturday, Nov. 20 at 7 p.m. at Red River Theatres, 11 South Main St., Concord, N.H. Admission is either by weekend pass ($50), which allows entrance into all films of the three-day festival, or Saturday day pass ($25), which allows entrance to all films on Saturday only. Tickets available at the door or in advance from the Red River box office online at www.redrivertheatres.org or by calling (603) 224-4600. For more info on the Somewhere North of Boston Film Festival, visit www.snobfilmfestival.com.
Posted by Jeff Rapsis at 9:12 AM