Some publicity, and a pair of silent screenings 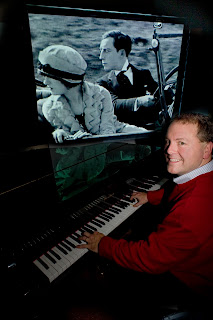 In December, I was selected for a brief Q & A profile by the kind folks at New Hampshire Magazine. (Must be a real shortage of interesting people in the Granite State these days!) As part of the package, they had a photographer come by and take some photos of me at a piano at the Manchester Community Music School. The photographer, P.T. Sullivan, set it up so the shot could include me as well as the projected image of a frame featuring a notable silent film: I chose a shot of Buster Keaton from the last reel of 'Sherlock Jr.' (1924). P.T. got a nice shot, which was used in the magazine piece (out this month) and is included here with his permission. Check out the piece in the February edition of New Hampshire Magazine.

Speaking of 'Sherlock Jr.': it was one of two silent films presented with live music this past week to a film studies class at Southern New Hampshire University right here in Manchester, N.H. The other was Tod Browning's 'The Unknown' (1927) starring Lon Chaney. Both were selected not only because they're great pictures that evoke strong reactions even today, but they're both less than an hour long, meaning we could fit them in a classroom period. 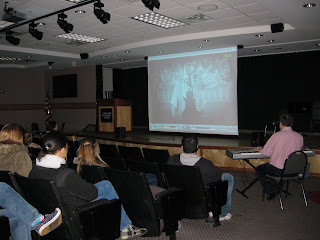 New Hampshire-based filmmaker Bill Millios is the instructor. I did the music for his 2005 independent feature 'Dangerous Crosswinds,' and Bill occasionally involves me in other projects—in this case, teaching cinema. Showing a silent film to about 30 college students at 9:30 a.m. perhaps isn't the best recipe to get a big reaction, but they seemed interested and I got some good questions and comments at the end. Many thanks to Bill for going the extra mile for silent film and trying to give students the real thing.

Later this month, I'm doing music for a screening of 'It' (1927) as part of a film studies class at the University of New Hampshire/Manchester, and I'm looking forward to that. Even if the effort sparks an interest or awareness on the part of one student, I think it's worth it. I just corresponded with a teacher at Great Brook Middle School in Antrim, N.H., and it looks like we're on for another silent film program there this coming spring. We did it last year and they were a great audience, so I'm really looking forward to a return engagement!
Posted by Jeff Rapsis at 10:59 PM