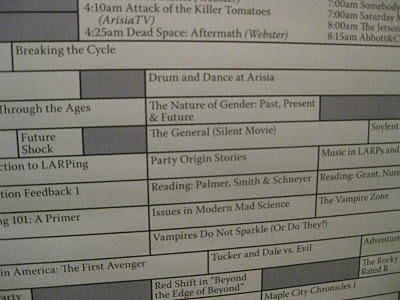 It was perhaps the most improbable silent film screening I've done yet: Buster Keaton's Civil War epic 'The General' (1927) as part of a massive annual science fiction and fantasy convention at Boston's Westin Hotel. But there it is (above), on the very packed schedule-of-events grid, in the film screening room on Friday, Jan. 13 at 10 p.m., just after the portentous documentary 'Future Shock' (narrated by Orson Welles) and just prior to a midnight showing of the dystopian epic 'Soylent Green' (1973).

The event, "Arisia 2012: Where Science and Adventure Come Together," is billed as "New England's largest and most diverse science fiction and fantasy convention," a claim I have no reason to doubt. On the coldest night of this winter so far, I found myself schlepping my sound gear into a hotel lobby swarming with conventioneers dressed in extravagant and sometimes outlandish costumes: mermaids, warlocks, necromancers, wizards, time lords, trekkies, and maybe a few silent film stars. (I hoped.) It was all I could do to keep from gawking at the passing parade, a surreal mid-winter vision, one composed of pirates from the past and courtesans from the future, where mismatched tube socks and leather corsets and furry beaver hats are apparently the in style. Hey, you heard it here first.

But never mind fashion trends to come. I had never heard of this event, which each year attracts thousands of fantasy devotees to four days of seminars, parties, discussions, celebrations, and public displays of everyone's inner and outer geek, and quite a few bare mid-riffs in the bargain.

I found it strange that a convention devoted to fantasy would take place in such a non-descript modern conference center, with events apportioned into carpeted ballrooms and meeting rooms filled with padded chairs in neutral colors, and with pitchers of ice water lurking on folding trays in the corners, but that didn't seem to faze anyone. If anything, the Westin's bland decor served to make the convention's outrageousness stand out in high relief, which I noticed as non-convention hotel guests made their way through the lobby.

Not being a fellow traveler, I really didn't know what to make of it all. I kept expecting Triumph the Insult Comic Dog to show up and start berating the participants. Look! Here comes a guy with a YOU DON'T KNOW SITH t-shirt. Look! There goes a guy wearing a fez and a kilt. Who are these people, and where do they come from? I didn't know. But it was clear that this was their destination. 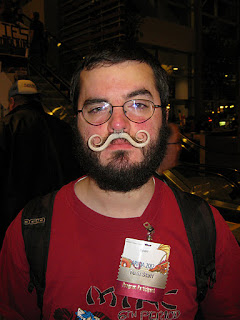 Everywhere I turned was something unexpected. Take, for instance, the guy in this picture, whose get-up was highlighted by a mustache produced on a 3-D printer. Apparently the layers of some kind of polymer build up to the point where a three-dimensional object is produced -- in this case, a handsome old-time mustache made out of what appeared to be futuristic puffed wheat and complete with functional nasal clips, which he demonstrated by removing and then reattaching the mustache with the greatest of ease.

In trying to find the film room and load in my gear and stow the car and find the bathroom, I didn't have a chance to grab many pictures. Below is the pirate sword on which I was nearly impaled when going up an escalator. Back in the day, I can only assume the real pirates would have developed some kind of sword etiquette for escalators had they encountered them. Just because they were pirates didn't mean they weren't practical. 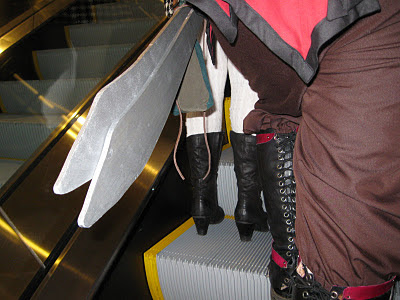 And below is a gal who is apparently something of a celebrity among the faithful. I asked if I could take her picture because of her unusual hair augmentation, which looked to me like a collection of those plastic tubes that you can whip around your head and they make a sound. But it turned out she was a featured model in a convention-related blood drive calendar produced last year, and so was quite accustomed to being hounded by the paparazzi. 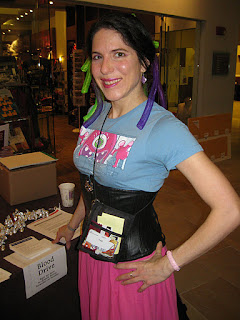 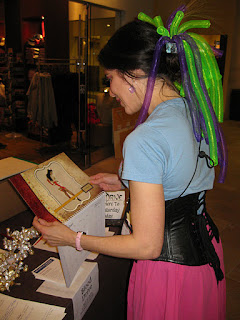 And then there were intriguing paradoxes to consider, such as a panel discussion on what makes up a good panel discussion. Science fiction or not, I thought this triggered infinity as effectively as any Dr. Who episode: 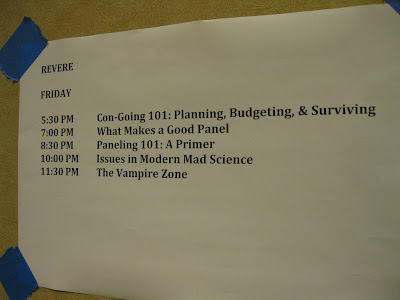 And how about this self-referencing notice about the sticky issue of blue tape, affixed to the convention center wall by you-know-what: 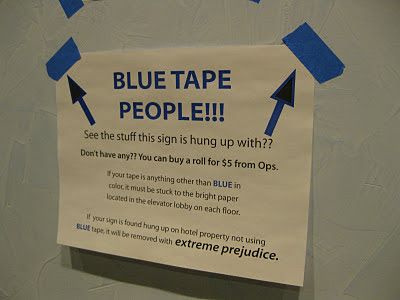 And this? Maybe that guy printed out too much mustache? 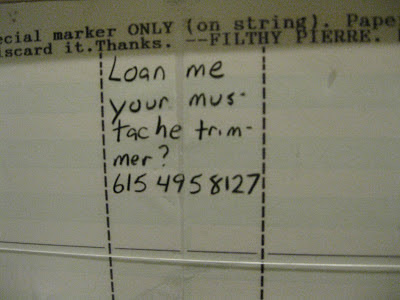 What was I doing there? Well, turns out the Arisia gathering (to find out more about that name, visit http://2012.arisia.org) is the only science fiction/fantasy festival in the United States that still runs actual film as part of its programming. Imagine that! Another odd thing, that a science fiction festival would cling to what's becoming an obsolete format, at least in terms of current films. But I'm not complaining. Update on 1/25/12: subsequent traffic on other message boards has revealed at least one other festival that shows film: an event called Lunacon.

This year, continuous screenings of prints, some 35mm and others in 16mm, were held in the Otis Room, a conference space that's large enough to house a big screen at one end and a makeshift projection booth at the other: 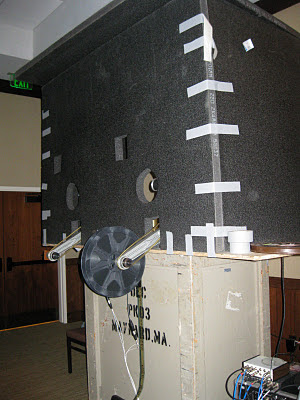 One of the traditions of Arisia is to run a silent picture with live accompaniment, which is why film programmers Scott Norwood and Scott Dorsey got in touch with me a few months ago. They'd heard me do music for several Keaton screenings at the Somerville (Mass.) Theater this past summer, and offered me the honor of being the accompanist for this year's silent feature, Buster Keaton's 'The General.'

I said sure, not quite understanding what an unusual event this is. What was Buster's Civil War epic doing at a sci-fi/fantasy convention? It was primarily a matter of print availability, it seems, but the more I think about it afterwards, the more it makes sense. All silent film is a fantasy of sorts, and early railroad locomotives were the high tech monsters of their time, an original expression of the "Steampunk" mindset.

As an added attraction, last year one of the two Scotts (Scott Dorsey, nicknamed 'Kludge') used what he said was a "Soviet newsreel camera" to film scenes on the 2011 convention on silent 16mm color stock. The result was a 15-minute collection of silent footage with a distinctly "home movie" feel to it, and music was needed. I obliged with tinkly-bell Philip Glass-like accompaniment, primarily so it would contrast effectively with the more traditional orchestra score to follow with 'The General.'

Everyone was awfully nice: the two Scotts, the audience, curious look-inners. After scenes of last year's convention looking like they were from a 1970s TV newscast, Scott Dorsey got up and introduced the General, and off we went. Audience of about 25 people, but pretty lively. The 16mm print was wound on two reels and other than a few rough splicy sections, looked pretty good. I hadn't previewed the film prior to the show, but the score fell into place pretty easily. Not sure why, but that sometimes happens -- maybe it's the lack of pretension or expectations.

And sure enough, even when surrounded by sessions on Larping and Dr. Molotovcocktail's High Tea Party, Buster's filmmaking resonated. Reaction grew as the film unspooled, and by the end they were cheering Buster as much as any gathering of Confederate battle re-enactors would have. I was pleased to get a nice ovation at the end, too.

I can't say enough for guys such as Scott and Scott. Their commitment to film and their knowledge of it makes me feel confident that the medium will be around for a very long time, even if it does get relegated to the commercial fringe. Their offer of a free pass to the entire four-day convention was very generous, and if I do manage to get asked to return next year, I'll try to arrange my schedule to attend.

But alas, as the clock struck midnight, I had to pack up my things and head out, causing me to miss parties such as this: 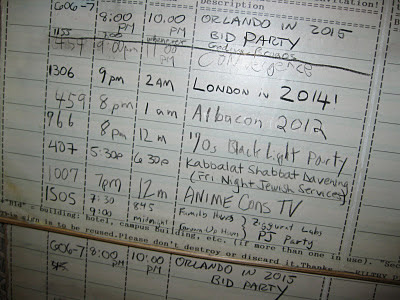